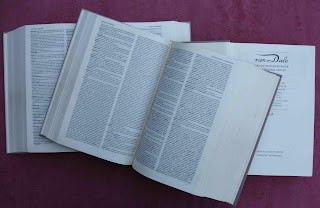 This is another post on that issue. I certainly don’t intend to write about every case in which jurors use technology in connection with a trial, thereby giving rise to a claim of juror misconduct. I decided to write about this one because the facts are a little different from those that have come up in prior cases . . . and because of precisely how the juror used the technology.

The case is Tapanes v. State, 43 So.3d 159 (Florida Court of Appeals 2010), and it involves Jose Tapanes' appeal from his conviction for manslaughter. Basically, it seems that something went very, very wrong between Tapanes and a man and his family who moved into Tapanes’ neighborhood in September 2006. This is how the Court of Appeals’ opinion describes what happened:

[Tapanes] stopped by the victim's house to introduce himself and welcome the victim to the area. Later that night, the victim woke his mother and her fiancé to tell them [Tapanes] had pulled a gun on him while he was walking his dog. The victim called his mother during the confrontation. . . .

The victim's mother and fiancé convinced [him] not to call the police to report the confrontation. The victim then drove to [Tapanes’] house and pulled into his driveway. [He] honked the car horn and then knocked on [Tapanes’] front door. The victim's family followed [him] to [Tapanes’] house. [His] sister heard the victim say, `[Y]ou have a gun behind there, don't you.’ At that point, [Tapanes] stepped out carrying a rifle and pointed it at the victim. [Tapanes] and victim exchanged words, and then there was a flash and a shot fired. The victim was no longer standing. [Tapanes] took two steps forward, lowered the gun, and fired again. The victim sustained two gunshots, including a fatal wound to his abdomen.

I couldn’t find any online stories about the case, but I found a news story on Westlaw that gives a little more information about what happened. This is how it describes what led to Tapanes’ being charged with murder:


On Sept. 17, 2006, an intoxicated Cote, who had just moved into . . . neighborhood, took his dog for a walk and encountered Tapanes. Cote questioned why Tapanes was carrying a gun with him as he took out his trash. They argued and Tapanes pointed his BB gun at Cote, according to testimony. [At trial, the] defense said Cote became enraged, shoved Tapanes and threw a beer bottle at him. Cote then returned home and argued with family members about calling the police.

Minutes later, he drove his Jeep into [Tapanes’] driveway . . . and began honking the horn. . . . [He] got out, walked up to the house and started banging on the door and yelling. . . . Tapanes' doors were locked and his windows were still boarded up from the hurricane. . . . [He] opened his front door, picked up a pump-action 12-gauge shotgun and fired into Cote's chest. Once Cote fell in the doorway, Tapanes fired again.

Man Who Shot Neighbor Will Serve 15 Years, South Florida Sun-Sentinel (July 12, 2008), 2008 WLNR 13120471. I include these additional facts because I think they’re relevant to what the juror did, and why. At trial, Tapanes took the stand and said Cote was yelling “`I’m going to kill you, open the door’”, among other things. Tapanes v. State, supra.

Tapanes was charged with murder which, as Wikipedia notes, is the most serious type of homicide. As Wikipedia also notes, historically, murder was defined as homicide that is committed with “malice aforethought”, a state of mind Florida’s statute captures. Under Florida Statutes § 782.04(1)(a)(1), murder is the “unlawful killing of a human being” that is “perpetrated from a premeditated design to effect the death of the person”.

Under Florida law, as in other states, manslaughter is a lesser-included offense of murder, i.e., it consists of causing the death of human being with a lesser degree of culpability than is required for murder. According to the Florida jury instruction for manslaughter, in order to prove someone guilty of manslaughter, the prosecution must prove beyond a reasonable doubt. (i) that the victim is dead and (ii) that the defendant’s act caused the victim’s death. Florida Standard Jury Instructions in Criminal Cases 7.7. The instruction notes that to convict someone of manslaughter, “it is not necessary for the State to prove that the defendant had an intent to cause death, only an intent to commit an act that was not justified or excusable and which caused death.” Florida Standard Jury Instructions in Criminal Cases 7.7.

Now we need to deal with the problematic juror. As I noted earlier, Tapanes was convicted of manslaughter, not the murder with which he was charged. After he had been convicted, a juror contacted Tapanes’ lawyer and said that during a break from

deliberations, the foreperson used a smartphone, specifically an iPhone, to look up the definition of `prudence.’ The court granted a motion to interview jurors and determined, after an evidentiary hearing, that there was juror misconduct based on the fact that the jury foreperson utilized his smartphone to search an internet site, Encarta, for the definition of `prudent’ or `prudence.’

In addressing Tapanes’ appeal, the Court of Appeals noted that a new trial can be warranted if jurors consult “unauthorized materials” that affect their verdict. Tapanes v. State, supra. It also noted that a dictionary is

The Court of Appeals held that it was required to reverse Tapanes’ conviction:

[L]ooking up the definition of `prudent could hardly be considered irrelevant to the legal and factual issues in this case. The word `prudent’ was mentioned in the jury instructions given by the trial court. The state mentioned the term repeatedly during closing argument. The facts . . . center on whether [Tapanes] acted in a `prudent’ manner . . . when confronted by the victim at his front door and whether [he] should have called 911 instead of opening the door. The concept of `prudence’ is one that could be key to the jury's deliberations. At the very least, we cannot say there is no reasonable possibility that the juror's misconduct, by utilizing the smartphone to retrieve the definition of `prudence,’ did not affect the verdict in this case.

After Tapanes was convicted, the judge sentenced him to serve 15 years in prison for Cote’s death. Jason Schultz, Shooter’s Release Outrages Victim’s Kin, Palm Beach Post (August 6, 2008) 2008 WLNR 14730828. In August of 2008, the judge granted Tapanes’ request to be released while he appealed his conviction; the judge approved his release on $250,000 bond and house arrest, with “an electronic bracelet to monitor his whereabouts.” Shooter’s Release Outrages Victim’s Kin, supra. I don’t know, but I’m assuming he’s been out on house arrest since.

I suspect the judge who presides over the new trial will be really, really sure jurors don’t use iPhones or BlackBerrys or other technology to do research while they deliberate. I wonder if Tapanes is worried about the outcome of his new trial. . . .

Cote was yelling “`I’m going to kill you, open the door”. [thinks to self] Oh, I guess I better open the door.

I also notice that there was no mention of Florida's Castle Doctrine here, which is funny because the State seemed to suggest that the guy should have called 911 (which is similar to having a duty to retreat - something the castle doctrine says you don't have to do). Since he had no such duty, the guy's lawyer should have argued that the alleged prudence in opening the front door was not relevant.

Some of the news stories seem to mention the Castle Doctrine, but it didn't really come up in the opinion.

How is this that much different from having a juror with a decent vocabulary (who knew what prudent meant) or asking the judge for clarification. It would seem that if asked the judge would give a pretty similar definition (juries are allowed to ask for clarification on items such as this, correct?). I understand that using an external resource is not allowed, but jurors have to bring in "items" such as vocabulary and basic knowledge to understanding the proceedings anyway...

You make a perfectly logical point . . . I think the rationale for the approach the courts take is that tangible items -- like a dictionary -- can carry more weigh, more implied authority, than what one person says.