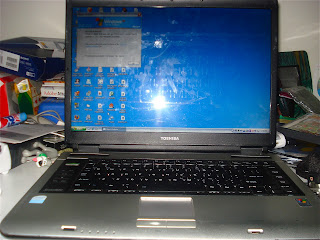 As Wikipedia notes, in Brady v. Maryland, 373 U.S. 83 (1963), held that the prosecution’s withholding exculpatory evidence violates “due process `where the evidence is material either to guilt or to punishment”.

Under Brady, then, the prosecution must disclose evidence to the defense if the evidence would (i) tend to establish the defendant’s innocence or (ii) reduce the sentence that could be imposed on the defendant if he/she is convicted of the crime(s) charged.

That brings us to the rather unusual Brady argument that was made in State v. Valdez, __ P.3d __, 2010 WL 4643839 (Washington Court of Appeals 2010). Isidro Valdez was charged with second-degree theft in violation of Washington state law based on these facts:

A jury heard the case. Circuit City's former assistant manager, Roman Bondaruk, testified that he saw video surveillance of Mr. Valdez. It showed that he walked into the store empty-handed, took an orange (or light colored), refurbished, 17-inch Toshiba Satellite laptop computer from a clearance table, and carried it out of the store without paying for it.

Former theft prevention specialist, Terrance Jackson, confronted Mr. Valdez. Mr. Valdez denied stealing the computer. He claimed he bought a black laptop computer at a flea market. He said it did not work when he bought it. And he said he took it to Circuit City to find parts to repair it, did not find the parts, and left.


Circuit City's computer inventory system showed this missing computer had not been sold. Mr. Bondaruk gave Officer David Clark the computer's serial number and Mr. Valdez's license plate number. He also showed Officer Clark the surveillance video. It showed a man who looked like Mr. Valdez `walking out of the store carrying a [light]-colored laptop under his arm.’. All inventory records and surveillance videos were destroyed when Circuit City went out of business.


Officer Clark got a warrant and searched Mr. Valdez's house for the computer. He found the orange laptop. The model and serial numbers matched the numbers of the computer that had been stolen from Circuit City. Officer Clark tried unsuccessfully to turn the computer on; he believed the battery was dead. The officer seized the laptop, photographed it, and returned it to Circuit City. Circuit City apparently disposed of it because it was not available at the time of trial.

On appeal, Valdez argued that the trial court “should have granted his motion to dismiss the theft charge because the computer was material exculpatory evidence and the State failed to preserve it.” State v. Valdez, supra. In addressing that argument, the Court of Appeals noted that

A trial court must dismiss a criminal charge if the State fails to preserve material exculpatory evidence. . . . Here, the question is whether the evidence, if believed, would be exculpatory and that is a question of law. So our review is de novo. . . .

The Court of Appeals then explained that the

physical computer here is materially exculpatory only if its exculpatory value was apparent on its face before it was returned to Circuit City and it was so unique that Mr. Valdez could not reasonably obtain comparable evidence.

the computer was exculpatory because he could have shown that it did not work and thereby corroborated his version of the events-- that he bought the computer at a flea market and took it to Circuit City to find parts and fix it. But no one argues, or argued, that the computer worked. The question remains, so what if it did not work?

The Court of Appeals explained that under Washington law, second-degree theft – the charge that was brought against Valdez – “requires proof that Mr. Valdez took Circuit City's property, intending to deprive Circuit City of the property.” State v. Valdez, supra. It found that given the elements of the crime, the computer was not material exculpatory evidence pertinent to Valdez’s guilt or innocence on this charge:


The computer itself, then, had little or no exculpatory value. Simply assuming that it would have made Mr. Valdez's version of events more likely is not enough.

his case should have been dismissed because Circuit City's inventory records and surveillance videos were not available at trial. He argues that a lack of physical evidence casts doubt on the fairness of his trial.

But both direct and circumstantial evidence are probative. . . . A lack of direct evidence, then, is not a ground for reversing Mr. Valdez's conviction.


The computer here was not material exculpatory evidence. The State was not required to preserve it. And the trial court properly denied Mr. Valdez's motion to dismiss the theft charge.

And, finally, the Court of Appeals ended the opinion with the arguably superfluous observation that

[m]oreover, the evidence of Mr. Valdez's culpability, independent of the physical presence of this computer, is, in a word, overwhelming.

One of the things about law and law enforcement that continues to amaze is the way it's so precise in some ways, and so sloppy in others. Here, they didn't keep track of the stolen computer or the video tape. I guess they don't have to keep the evidence that supported the warrant. And the officer "believed" the battery was dead? Did he try plugging it in? Is that so hard?

Apparently, the value of the stolen goods was not important in this case, but there are situations where there is a lot of difference between the theft of worthless broken laptop and the theft of a new, functioning laptop worth a couple thousand dollars.