Transportation “in Interstate or Foreign Commerce” 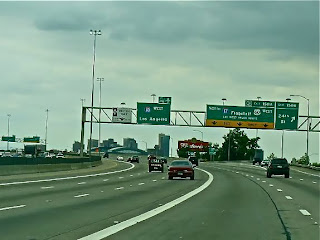 According to the opinion cited above, Wright’s conviction for violating the statute arose from the following facts:

On January 16, 2003, from the Tucson FBI office, Special Agent Andrews conducted an undercover search on a file-sharing program known as an mIRC (Internet Relay Chat). Andrews came across the user name `azgymguy2’ in the chat rooms `100eensexpics’ and `gayteenpics.’ After typing in a `trigger’ that allowed her to establish a direct connection with azgymguy2's file-trader, the following announcement appeared:

`Welcome to my server. I'm fairly open to uploads, so please just upload stuff you feel is good. However, I am always looking for huge cocks, young boys and movies. I hope you enjoy your stay.’

According to the government's expert witness at trial, Sven Nielsen, Wright's direct client-to-client connection to Andrews -- . . . the connection Wright used to transport the images to Andrews -- did not go through IRC servers such `that the actual traffic of sending the file or sending the chat from that point on d[id] not actually cross state lines.’ Nielsen explained that . . . to establish a direct client-to-client connection, the initial request takes `the normal IRC route,’ but once the request is accepted the computers are connected directly, not through the server.

Of course, while the direct client-to-client communication does not actually cross state lines, the files are still transmitted over the Internet. . . . Andrews testified that when she logged on to the IRC network on January 16 and eventually connected to Wright's file-server, . . . she connected through a server in San Jose, California.

As I noted earlier Wright appealed, arguing that “§ 2252A(a)(1), as it existed” as it existed at the time of his offense, required interstate transmission of child pornography images”. U.S. v. Wright, supra. Legislation adopted in 2008 removed this language and replaced it with the language I highlighted above. In his appeal, Wright argued that the

In analyzing the government’s first argument, the Court of Appeals noted that “the plain language” of the original version of the statute “requires that a person mail, transport, or ship child pornography interstate. That is to say, a plain reading of the statute seems to require at least some method of interstate travel.” U.S. v. Wright, supra. But the court also noted that in U.S. v. MacEwan, 445 F.3d 237 (U.S. Court of Appeals for the 3d Circuit 2006), that Court of Appeals found that in a prosecution under 18 U.S. Code § 2252A(a)(2)(B), which makes it a crime to knowingly receive or distribute “any material that contains child pornography that has been . . . shipped or transported in interstate or foreign commerce by any means”, did not require that the images have actually crossed state lines. U.S. v. Wright, supra.

The 9th Circuit explained that it had reached the same conclusion in interpreting similar language in other criminal statutes:

In United States v. Korab, we addressed 18 U.S. Code § 875(b), in which someone is guilty of federal extortion if he `transmits in interstate commerce any communication containing any threat . . . to injure the person of another.’ U.S. v. Korab, 893 F.2d 212, 213 (U.S. Court of Appeals for the 9th Circuit 1989. We held that the statute required the government to prove that the threats themselves, in that case telephone calls, traveled across state lines. There, all of the threatening phone calls between the defendants and the victim took place intrastate and the one telephone call that crossed state lines did not contain threats. . . . `[F]ind[ing] no evidence of threatening interstate communication, we reversed the conviction. U.S. v. Korab, supra.

U.S. v. Wright, supra. The 9th Circuit also noted that it had reached this conclusion with regard to a prosecution under 18 U.S. Code § 875(c), which makes it a federal crime to transmit “in interstate or foreign commerce any communication containing any threat to” kidnap or injury a person. In U.S. v. Sutcliffe, 505 F.3d 944 (2007), the 9th Circuit held that the requirements of the statute were met when the government proved that the “defendant’s website, containing the threats, crossed state lines by way of Internet servers in three different states.” U.S. v. Wright, supra.

The Court of Appeals then rejected the government’s attempt to rely on a case construing the Travel Act, 18 U.S. Code § 1952(a), which makes it a crime to use “any facility in interstate or foreign commerce” to further specified types of unlawful activity. U.S. v. Wright, supra. The Court of Appeals explained that because § 2252A(a)(1) “does not include the word `facility’”, the phrase `in interstate or foreign commerce’ modifies the actus reus proscribed in the statute – mailing, transporting or shipping child pornography.” U.S. v. Wright, supra.

Finally, the Court of Appeals rejected the government’s argument that “use of the Internet, standing alone” satisfied the statute’s interstate or foreign commerce requirement. U.S. v. Wright, supra.

What distinguishes this case from those cases holding that Internet use, standing alone, provides the sufficient jurisdictional nexus, is that in each of those cases it was impossible to determine whether the images in question actually crossed state lines. . . . In the face of that uncertainty, those courts held that proof of Internet use was sufficient, reasoning that because it was just as likely that use of the Internet either remained entirely intrastate or involved multiple states, `the very interstate nature of the Internet’ favored finding that the images traveled in interstate commerce. [citing U.S. v. Lewis and U.S. v. MacEwan, supra.] Thus, MacEwan and Lewis stand for the proposition that, where it is impossible to determine whether the receipt of child pornography images crossed state lines, a defendant's use of the Internet may serve as a proxy for satisfying the interstate commerce requirement.

However, the question MacEwan and Lewis left unanswered is that presented by Wright's case: whether use of the Internet, standing alone, is sufficient to satisfy the `interstate commerce’ requirement where it is undisputed that the images themselves did not cross state lines. . . . [W]e hold that a defendant's mere connection to the Internet does not satisfy the jurisdictional requirement where there is undisputed evidence that the files in question never crossed state lines.

I decided to do a post on this case, even though the 2008 revision of § 2252A(a)(1) may have eliminated the problem the government had here, because the “in interstate or foreign commerce” language is still used in other federal criminal statutes, which means this holding might be used to challenge charges in other cases.

If you’re wondering why the “interstate or foreign commerce” is so important, you might check out this Wikipedia entry on federal criminal jurisdiction. As Wikipedia notes, for a federal court to have jurisdiction over a criminal case, the case must involve charges for a crime that “has been created pursuant to an express or implied constitutional grant of authority.” As Wikipedia also notes, Congress has relied heavily on the Commerce Clause of the U.S. Constitution to expand federal criminal jurisdiction . . . which is why the “in interstate or foreign commerce” element was so important in this case.