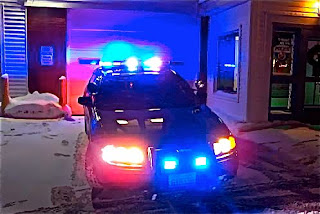 As I’ve explained in earlier posts, the 4th Amendment protects us from “unreasonable” searches and seizures.

This post is about an Ohio case in which the defendant made what I’d consider a . . . pretty expansive argument as to the existence of a reasonable expectation of privacy. We’ll start with how the case arose:

On October 22, 2008, Medina County Sherriff's Deputy Paul Schismenos stopped a vehicle after witnessing a marked lane violation. When Deputy Schismenos approached the driver, later identified as [Raymond] Ingram, he smelled burnt marijuana. Deputy Schismenos left Ingram's passenger in the vehicle, but asked Ingram to exit. He placed Ingram in the back of the police cruiser. Ingram admitted he had a suspended license, and Deputy Schismenos called for a canine unit.

On May 6, 2008, a grand jury indicted Ingram on one count of the possession of crack cocaine, in violation of [Ohio Revised Code § 2925.11(A)(C)(4)(e)], and an attendant forfeiture specification. On December 9, 2008, Ingram filed a motion to suppress, arguing that Deputy Schismenos . . . violated his reasonable expectation of privacy by recording the conversations he had while detained in the backseat of the police cruiser.

Ingram based his motion to suppress the conversations on the premise that what the officer did violated Ohio Revised Code § 2933.52. State v. Ingram, supra. Section 2933.52 is Ohio’s wiretap statute, i.e., the statute that makes the interception of “wire, oral, or electronic communication[s]” unlawful unless it’s done in accordance with the statute’s provisions.

In analyzing Ingram’s argument, the Court of Appeals noted, first, that he did not

challenge the trial court's factual findings in this assignment of error, only the court's legal conclusions. Therefore, this Court will accept the facts set forth in the record and conduct a de novo review. The undisputed facts are that Ingram made several incriminating statements while inside Deputy Schismenos' cruiser. He made these statements to: (1) his passenger, who was in the cruiser with him; and (2) his mother, who he called on his cell phone while inside the cruiser. . . .

Since Ingram was relying on Ohio Revised Code § 2933.52, the Court of Appeals began its analysis of his argument by noting what the statute covers:

State v. Ingram, supra. The Court of Appeals then noted that as “to the statements he made to his mother,” Ingram relied on

State v. Ingram, supra. The Court of Appeals then addressed Ingram’s argument as to why he did, in fact and in law, have a reasonable expectation of privacy in the back of the police cruiser:

Ingram would have this Court hold that a person placed in the backseat of a police cruiser enjoys a reasonable expectation of privacy, which can be dispelled only if the police first inform the person that any statements he or she makes will be recorded. He does not cite any law in support of this proposition. Rather, he attempts to distinguish one of the cases relied upon by the State, State v. Wynter (Mar. 13, 1998), 2d Dist. No. 97CA36. In Wynter, the [Court of Appeals] held that a person does not have a reasonable expectation of privacy after being arrested, Mirandized, and placed in the backseat of a police cruiser. Although Ingram was Mirandized, he argues that Wynter is distinguishable because he was not under arrest when he made incriminating statements. Further, he argues that he expected his conversations to be private.

The Court of Appeals, not surprisingly, didn’t buy Ingram’s argument:

`A marked police car is owned and operated by the state for the express purpose of ferreting out crime. It is essentially the trooper's office, and is frequently used as a temporary jail for housing and transporting arrestees and suspects. The general public has no reason to frequent the back seat of a patrol car, or to believe that it is a sanctuary for private discussions. A police car is not the kind of public place, like a phone booth (e.g., Katz v. U.S., 389 U.S. 346 (1967)) where a person should be able to reasonably expect that his conversation will not be monitored. In other words, allowing police to record statements made by individuals seated inside a patrol car does not intrude upon privacy and freedom to such an extent that it could be regarded as inconsistent with the aims of a free and open society.’ U.S. v. Clark, supra.


Because Ingram did not have a reasonable expectation of privacy when making statements to his mother and passenger in the backseat of Deputy Schismenos' cruiser, [Ohio Revised Code § 2933.51(B) et seq.]. does not apply. Therefore, the trial court did not err by refusing to suppress Ingram's statements.

One wonders what he thought the small video cameras pointing towards the backseat area were for. It's not like the cameras are hidden or invisible. And everyone has seen plenty of news broadcasts showing the cops chasing drunks, or using force, etc., to know that police cars have cameras.