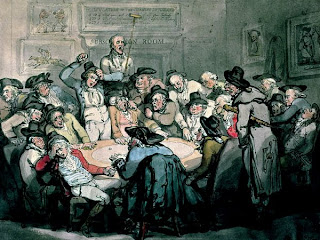 I’ve done at least one post on how U.S. law (federal law, in that instance) approaches online gambling (or gaming). This post is about a recent Washington Supreme Court that addressed the issue of online gambling under Washington state law.

a judgment of a court in a civil case which declares the rights, duties, or obligations of one or more parties in a dispute. A declaratory judgment is legally binding, but it does not order any action by a party. . . .

A declaratory judgment is typically requested when a party is threatened with a lawsuit but the lawsuit has not yet been filed; or when it is thought by one of two (or more) parties that their rights under law and/or contract might conflict. . . .

This is how the Washington Supreme Court described Betcha:

For a fee, registered Betcha users could post proposed wagers on the outcomes of certain events for other users to accept. Posted wagers on Betcha have ranged from sporting events, to political contests, to whether the moon would be full on a given night. Offerors were able to set the terms of the wager, including whatever stakes and odds they concluded were appropriate. Offerors were required to first fund an account with a credit card to ensure offerors had enough money to `cover’ their bets if they lost. . . . [T]hose accepting an offer to wager were required to have enough funds in their accounts to cover the bets before wagers could be accepted. Once a bet was accepted, Betcha placed the wagered funds into escrow and froze the account pending the outcome of the wagered on event. Betcha . . . charg[ed] a fee whenever a bettor listed a bet, accepted a proposed bet, proposed a counteroffer to a bet, or posted an offer in a larger font size and a more prominent location.

Every registered user . . . was given an `honor rating,’ . . . representing the relative trustworthiness of a bettor. . . . Honor ratings were based on various factors including, among other things, the size of a user's bets, negative feedback from other users, and the promptness with which a bettor paid losses.

Betcha v. Gaming Commission, supra. It was at this point that Betcha filed the action for a declaratory judgment. The trial judge held that Betcha was engaged in “booking” and “professional gambling” in violation of Washington state law, the Court of Appeals reversed the trial court judge and the case went to the state Supreme Court. Betcha v. Gaming Commission, supra.

(a) Acting other than as a player . . ., the person knowingly engages in conduct which materially aids any form of gambling activity; or

(b) Acting other than in a manner authorized by this chapter, the person pays a fee to participate in a card game, contest of chance, lottery, or other gambling activity; or

(c) Acting other than as a player or in the manner authorized by this chapter, the person knowingly accepts or receives money or other property pursuant to an agreement or understanding with any other person whereby he or she participates or is to participate in the proceeds of gambling activity; or

The Supreme Court explained that

Although Betcha did not take a position on the bets listed on its web site, it did charge its users a fee for the opportunity to place bets with others. Betcha's entire business model was based on charging fees from those wishing to bet on its web site. Users . . . were allowed to send bets to Betcha, which would post them on its web site for a fee. Betcha charged fees `for the opportunity to place a bet.’ It was unambiguously engaged in `bookmaking’ as that term is defined under the gambling act.

You can read more about the case here, if you're interested. According to this new story, this decision isn’t “expected to lead to any immediate criminal charges”, which seems odd. So does the fact that, as this news story notes, Betcha was “shut down in 2007 following a raid on the company’s [Seattle-based] offices that was conducted by Washington authorities at the behest of the state of Louisiana.” Those stories make it sound like Washington may just let this go, since the site has apparently been down for almost 3 years . . . ?

Posted by Susan Brenner at 1:04 PM