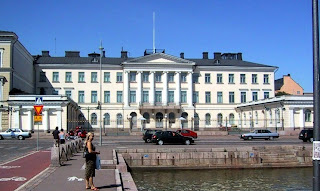 proscribed, tried, and punished according to the laws of the place where it occurs. American criminal law applies beyond the geographical confines of the United States, however, under certain limited circumstances. . . . A surprising number of federal criminal statutes have extraterritorial application, but prosecutions have been few. This may be because when extraterritorial criminal jurisdiction does exist, practical and legal complications, and sometimes diplomatic considerations, may counsel against its exercise.

On August 27, 2009, a federal grand jury in California “returned a nine-count indictment” charging Donald Daniels, Martin Washburn, Tapani Koivunen and Irina Rebegeneau with committing and conspiring to commit wire fraud, mail fraud and money laundering in violation of federal law. U.S. v. Daniels, supra. On October 1, 20009, the grand jury returned a superseding indictment that re-charged these counts but added two: “Counts 10 and 11, against Daniels, Washburn and [Sergei] Shkurkin, for using and conspiring to use extortionate means to collect or attempt to collect any extension of credit in violation of 18 U.S. Code § 894.” U.S. v. Daniels, supra. These defendants then moved to dismiss Counts 10 and 11 on the theory that “applying section 894 under such circumstances constitutes an impermissible extraterritorial application of the extortion statute,” i.e., that this district court could not legally “exercise jurisdiction over such conduct.” U.S. v. Daniels, supra.

Before we can analyze their argument, the government’s response and the court’s ruling on the motion to dismiss, I need to outline how the charges arose:

Washburn was the president of FoodPro International, Inc.; Rebegeneau was a project manager/engineer at FoodPro; and Koivunen was the chief executive officer of Global Sierra Management, LLC. In 2003, FoodPro and GSM, along with AS Vahenurme Agro (`ASV’), an Estonian company owned by Finnish partners, formed Global Sierra Partners, LLC (`GSP’), a Nevada corporation. . . . created with the intent of opening a state-of-the-art milling and bakery operation in Estonia.

GSP sought a loan from [OPIC], a [U.S.] agency that provides financing . . . to encourage participation in foreign business projects. . . . OPIC [agreed to] provide an $8.9 million small business loan to GSP, and GSP would contribute $7.6 million in equity investment to the project. FoodPro would provide $3.8 million cash, ASV would provide $700,000 cash and $2 million in property contributions, and GSM would provide $1 million cash. . . .

The members of GSP devised a scheme [to] procure a short-term loan of $4.5 million from entities controlled by Daniels, . . . so GSP would appear to possess the financing it had promised OPIC it would procure. Once GSP received the loans from OPIC, GSP would return the money to Daniels, rather than invest it in the bakery. Daniels agreed to provide the short-term loan in exchange for 25% interest, which would ultimately result in a $1.15 million payment from GSP to Daniels. . . .

[By] October 2004, Daniels had become unhappy with the pace at which he was being repaid . . . . Daniels, Washburn and Shkurkin (a business associate of Daniels) devised a plan to convince the Finnish partners that Daniels' money came from the Russian mafia and to threaten the Finnish partners with bodily harm unless they quickly paid the remaining $650,000 owed to Daniels. To effectuate the plan, Daniels asked Arkady Zalan, a high-level employee at FoodPro, if he knew anyone in the Russian mafia. Although Zalan did not know anyone in the Russian mafia, he ultimately contacted a man known as `Gennadi,’ who lived in Israel.

On October 20, 2004, Washburn sent an email to the Finnish partners, . . . stating that representatives for the investors, including two Americans . . . and one Russian (Gennadi), wanted a face-to-face meeting to address . . . the loan agreement. In a follow up email sent the next day by Shkurkin to Koivunen (and copied to Washburn, Zalan and the Finnish partners), Shkurkin stated `[y]ou [the Finnish partners] knew exactly what you were getting into. We were very clear. . . . ‘

On November 15, 2004, a meeting of the GSP Board of Directors took place at a hotel in Helsinki, Finland. In attendance were Washburn, Zalan, Koivunen, the Finnish partners, Shkurkin and Gennadi. Prior to the meeting, Daniels deposited $5,000 into Zalan's bank account to pay for Gennadi's expenses. . . . [and] Zalan, Washburn and Shkurkin crafted a statement for Gennadi to read to the assembled Board.

At the meeting, Gennadi read the statement, which, . . . [said] that if the remaining $650,000 were not paid by GSP to Daniels, it would be collected from GSP and GSP's members by `all means necessary.’ The Finnish partners described this as a `mafia-style’ threat. . . .

Section 894 makes it a crime for anyone to “knowingly participate[] in any way . . . in the use of extortionate means to . . . attempt to collect any extension of credit.” It defines “extortionate means” as any “means which involves the use, or an express or implicit threat of use, of violence or other criminal means to cause harm to the person, reputation, or property of any person”. 18 U.S. Code § 891(7). The court noted that by making anyone who “participate[s] in any way” in such activity liable, Congress “evinced an intent to reach a broad range of conduct.” U.S. v. Daniels, supra.

The judge then found that all three defendants participated in such activity:

U.S. v. Daniels, supra. Finally, the judge found it was “reasonable” for the U.S. to exercise jurisdiction over the activity at issue in Counts 10 and 11 because it was strongly linked to the U.S., the U.S. has a strong connection with the defendants given their nationality, there was little if any risk that exercising jurisdiction would conflict with the interests of another state and exercising jurisdiction was “consistent with the traditions of the international system.” U.S. v. Daniels, supra.

While the judge noted that “there can be no doubt that Finland likely has a strong interest in regulating the conduct at issue in this case,” he found that all of the other relevant factors “favor finding that the exercise of jurisdiction is reasonable.” U.S. v. Daniels, supra.