Polls and Threatening the President 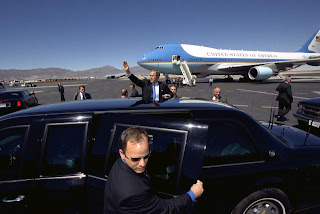 You probably saw the stories last week about the Facebook poll that asked whether President Obama should be assassinated. On Friday, the U.S. Secret Service said the poll was posted by a juvenile and it would not be seeking charges against him. (The stories all said it was a “him.”)

We were discussing online threats in class last week, and one student brought up the poll. He asked if a poll is a “threat,” and I thought that might be an interesting issue to analyze in a post.

The federal statute that makes it a crime to threaten the President is 18 U.S. Code § 871(a). It provides as follows:

Whoever knowingly and willfully deposits for conveyance in the mail or for a delivery from any post office or by any letter carrier any letter, paper, writing, print, missive, or document containing any threat to take the life of, to kidnap, or to inflict bodily harm upon the President of the United States. . . shall be fined . . . or imprisoned not more than five years, or both.

(This section also makes it a federal crime to threaten the President or Vice President elect or “any other officer next in the order of succession to the office of President of the United States”. We, though, are only going to focus on threatening the President.)

As I explained in an earlier post, there are two theories as to why we make threats a crime. One is that a threat inflicts emotional injury on the victim; the other is that a threat can be seen as a first step toward actually carrying out the threatened conduct. Under the first theory, the emotional “harm” resulting from the act of issuing the threat justifies the imposition of criminal liability on the person who made the threat. Under the second theory, the indication of danger resulting from the threat justifies using criminal liability in an effort to prevent the person making the threat from carrying it out.

Criminalizing threats is a more complicated process in the United States than in other countries because of our First Amendment. Black’s Law Dictionary defines “threat” as “[a] communicated intent to inflict harm . . on another or another’s property”. Black’s Law Dictionary (8th ed. 2004). It defines “speech” as the “communication of thoughts or opinions; something spoken or uttered”. Black’s Law Dictionary (8th ed. 2004). Since a threat communicates an intent to “harm” someone or some thing, it constitutes speech which would be protected by the First Amendment if that protection weren’t trumped by countervailing considerations: the two “harms” outlined above.

U.S. courts use the concept of “true threat” to distinguish speech that is protected by the First Amendment from threats, which the amendment does not protect. As the U.S. Supreme Court explained in Watts v. U.S., 394 U.S. 705 (1969), the

Nation undoubtedly has a valid, even an overwhelming, interest in protecting the safety of its Chief Executive and in allowing him to perform his duties without interference from threats of physical violence. . . . Nevertheless, a statute such as [§871(a)], which makes criminal a form of pure speech, must be interpreted with the commands of the First Amendment clearly in mind. What is a threat must be distinguished from what is constitutionally protected speech.

In the Watts case, Robert Watts was convicted of violating § 871(a). His conviction was based on statements he made “during a public rally” held in 1966 on the grounds of the Washington Monument. I gather that the rally in part focused on opposing the Vietnam War. It broke up into discussion groups and while participating in one of the groups Watts said, “`I have already received my draft classification as 1-A and I have got to report for my physical this Monday coming. I am not going. If they ever make me carry a rifle the first man I want to get in my sights is L.B.J.’” U.S. v. Watts, supra.

After he was convicted, Watts appealed, eventually to the Supreme Court. He argued that what he said did not constitute a “true threat” within the scope of § 871(a) and the Supreme Court agreed:

[T]he statute . . . requires the Government to prove a true ‘threat.’ We do not believe that the kind of political hyperbole indulged in by [Watts] fits within that statutory term. For we must interpret the language Congress chose ‘against the background of a profound national commitment to the principle that debate on public issues should be uninhibited, robust, and wideopen, and that it may well include vehement, caustic, and sometimes unpleasantly sharp attacks on . . . public officials.’ New York Times v. Sullivan, 376 U.S. 254 (1964). The language of the political arena. . . is often vituperative, abusive, and inexact. We agree with petitioner that his only offense here was ‘a kind of very crude offensive method of stating a political opposition to the President.’ Taken in context, and regarding the expressly conditional nature of the statement and the reaction of the listeners, we do not see how it could be interpreted otherwise.

Watts had initially appealed to the U.S. Court of Appeals for the District of Columbia Circuit. Watts v. U.S., 402 F.2d 676 (1968). A majority of the judges on that court affirmed his conviction but they disagreed as to whether § 871(a)’s requirement that the defendant have acted “willfully” means the government must show he intended to carry out his threat. U.S. v. Watts, supra. In reviewing the Court of Appeals’ decision, the Supreme Court noted that some lower courts had required the government to prove the defendant meant to carry out the threat, but declined to decide if that position is correct. . . . even though “we have grave doubts about it.” U.S. v. Watts, supra.

The Supreme Court has never returned to that issue, but lower federal courts have found that the government is not required “`to prove an intention to carry out the threat” in prosecuting someone for threatening the President. U.S. v. Rogers, 488 F.2d 512 (U.S. Court of Appeals for the Fifth Circuit 1974). As the U.S. Court of Appeals for the Eleventh Circuit explained, the

question is whether there was sufficient evidence to prove beyond a reasonable doubt that the defendant intentionally made the statement under such circumstances that a reasonable person would construe them as a serious expression of an intention to inflict bodily harm upon or take the life of the [President].

The U.S. Court of Appeals for the Eleventh Circuit applied this standard recently in upholding the conviction of Timothy Wade Pinkston. As a new story noted, Pinkston was charged with violating § 871(a) in 2007 after he “threatened to go to Washington and shoot [then-President] Bush.” Pinkston was convicted and appealed his conviction to the Eleventh Circuit, arguing that

all of the individuals involved in the events leading up to his arrest knew he had an extensive mental health history, was homeless, had no income, weapon, or transportation, and had previously been provided bedding at a hospital after threatening to harm himself. Based on this knowledge, as well as Pinkston's inability to provide details when asked how he would carry out his threat, Pinkston argues a reasonable person would not construe his alleged threat as a serious expression of an intent to inflict bodily harm upon or take the life of the President.

Pinkston made the statement that he intended to kill the President to several people including hospital personnel and government agents. He refused to back down from his statements during questioning. Despite the fact that Pinkston is homeless, he gave the impression that he could obtain a weapon and transportation. Pinkston's threat was taken seriously by hospital staff and the federal agents, and he was given multiple opportunities to recant his threat.

There was sufficient evidence for the jury to conclude that Pinkston's statements were not just political argument, idle talk, or jest, and that Pinkston intentionally made a true threat against the President under such circumstances that a reasonable person would construe it as a serious expression of an intention to inflict bodily harm upon or take the life of the President.

And that brings us back to the poll that asked if President Obama should be killed. You should be able to find a version of the poll here. In deciding whether a communication constitutes a “true threat” under § 871(a), a court would have to decide if a reasonable person would interpret the communication as a serious threat to harm the President or if that reasonable person would dismiss it as political speech . . perhaps inartful, tasteless political speech but still political speech.

I think a court would decide the poll is closer to the statement at issue in Watts than it is to the letter Rufus Sheppard sent then-President Bush a letter telling “`Mr. Bush’ he had a good job but went on to tell him that if he left office [Sheppard] would be there to `find you, kill you, and your brother too. He got to die because he’s the next president we will have’”. Brief of Plaintiff-Appellee United States of America, U.S. v. Sheppard, 2006 WL 5582263. (Sheppard was convicted of violating 871(a), a conviction which the Eleventh Circuit affirmed. U.S. v. Sheppard, 243 Fed. Appx. 589 (2007).)

I think a court would find that the poll wasn’t a “true threat” for two reasons. One is that, as I’ve noted before, a defining characteristic of a threat has been that the perpetrator communicated it to the victim. That element is inherent in both the emotional “harm” and threat-as-indicator-of-future-dangerous rationales for criminalizing threats: If I don’t communicate my threat to my prospective victim, how can we say I caused him/her to suffer emotional “harm?” And if I don’t communicate the threat to my prospective victim, how can we reasonably infer it is a reliable indicator that I will harm the victim?

Here, the juvenile who created the poll simply posted it online; unlike Rufus Sheppard, he didn't send (or try to send) a copy of the poll or a link to the poll to President Obama. And, unlike Pinkston, he didn't state that he, personally, intended to kill the President (depending, or not depending, on the outcome of the poll). Instead, he asked people if they thought the President needed to be killed (again, definitely not a good idea, but not, IMHO, a threat).

Does it matter that the poll was created and posted by a juvenile? I doubt it. While this certainly makes it easier to dismiss the poll as “idle talk” or “jest”, I really don’t think the result would be any different if an adult had posted it.

As to the opinion examples, most of them seem to be close to what Watts said in the case I talk about in the post . . . and the Supreme Court said that wasn't a threat. Seems to me that as long as you clearly stay within the scope of opinion, you have a strong First Amendment argument.

hi, ran across your blog as I'm having a discussion with a friend about action vs speech in regards to threats to the President. We were discussing folks being armed at site of meetings with Obama present. those with guns were kept outside but could this been prosecuted as a threat?
thanks