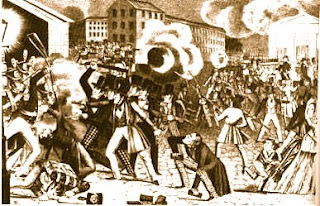 Every person who maliciously and willfully disturbs the peace or quiet of any neighborhood, family or person, by loud or unusual noise, or by tumultuous or offensive conduct, or by threatening, traducing, quarreling, challenging to fight or fighting, or fires any gun or pistol, or uses any vulgar, profane or indecent language within the presence or hearing of children, in a loud and boisterous manner, is guilty of a misdemeanor.

This post is about a “computer disturbing the peace” case: State v. Drahota, 17 Neb. App. 678, 2009 WL 1659696 (Nebraska Court of Appeals 2009). It arose “from an exchange of 18 e-mails beginning in late January 2006 and ending February 10, followed by two more e-mails in mid-June 2006-the latter two being the subject of the charge at issue.” State v. Drahota, supra. The case began in January, 2006 when Drahota, “a student at the University of Nebraska-Lincoln, began writing to William Avery, then a professor of political science at the university.” State v. Drahota, supra.

The intitial set of 18 emails – 11 from Drahota and 7 from Avery – were sent between January 27 and February 10, 2006. Essentially, these 18 e-mails are an exchange of differing opinions on a variety of topics, such as the Bush presidency and its policies, . . . the Iraq conflict, . . . the `war on terror’” and related issues. State v. Drahota, supra. The court noted that “Drahota's e-mails are much longer, to the point that such might be called `rants,” and often laced with profanity and invective.” Avery’s responses, “while suggesting disagreement, were quite brief.” State v. Drahota, supra. This series of emails came to an end with

Avery's e-mail of 3:35 p.m. on February 9, 2006, which responded to Drahota's sent at approximately noon that day, in which Drahota asserted that the university's football team would be good in a couple of years `if Al Queda doesn't destroy us first because of Liberals aiding them (just kidding).... You were my favorite instructor from any class .... Even though you're a liberal bum, I'll take you under my wing when the bad times come.’

State v. Drahota, supra. Avery’s reply email said “I will not respond to this. It is far too extreme, vile, and angry. Plus, it is full of untruths about very decent people (including me), whom you insist on accusing falsely of treason. So, let's end this.’” According to the court, this “generated an immediate response from Drahota in which he . . .asserted that his intention was to debate with an instructor and that Avery had mistaken the `tone’ of his e-mails, ending with, “Let's go drink and discuss your campaign.” State v. Drahota, supra. Approximately 20 minutes later, Avery responded with another email in which he said, in part, “I find this offensive and I will not engage in anymore of this with you.” State v. Drahota, supra.

That sparked more emails from Drahota, the content of which varied from threatening to kick Avery’s ass to retracting the threat and trying to be conciliatory. Avery eventually sent this email to Drahota:

Please consider this email a request that you not contact me again for the purpose of spilling more vile. Also, I think you should know that I have saved ALL of your ranting and threatening emails and will not hesitate to turn them over to the police if I hear anything more of this nature from you. Have a nice day.

Drahota sent a conciliatory reply, which Avery ignored. Avery did not hear from Drahota for 4 months, which is when he got “an e-mail . . . dated June 14, 2006, at 11:58 p.m. from `averylovesalqueda@yahoo.com’ with the subject line `Al-Zarqawi's dead’ This was followed on June 16 at 8:50 a.m. with another e-mail to Avery from the same Internet address, with the subject line `traitor.’

State v. Drahota, supra. At that point Avery went to the police. An investigator traced the last 2 emails to Drahota and he was charged with disturbing the peace in violation of Nebraska Statutes § 28-1322. He went to trial, was convicted and was fined $250. Drahota appealed, claiming the evidence was not sufficient to support the conviction. He seems to have argued that the First Amendment barred his conviction. The Court of Appeals disagreed.

It focused primarily on the two June, 2006 emails. The first one asked Avery if he was “sad that the al-queda leader in Iraq will not be around to behead people and undermine our efforts in Iraq.” State v. Drahota, supra. Here’s what the second one said:

I have a friend in Iraq I told all about you and he referred to you as a Benedict Arnold. . . . I'd like to puke all over you. People like you should be forced out of this country. Hey, I have a great idea!!!! . . . . Libs like yourself are the lowest form of life on this planet[.]

State v. Drahota, supra. The Court of Appeals found that these emails were not protected by the First Amendment:

[A]fter a hiatus of 4 months, Drahota, using a libelous e-mail address, accused Avery of being aligned with a terrorist group responsible for unspeakable violence in this country as well as in Iraq against U.S. troops and Iraqi citizens. He called Avery a traitor, said that he wanted to `puke all over’ him, and stated that Avery is the `lowest form of life on this planet.’ This hardly represents civil discourse or debate, and such accusations impugn Avery's loyalty to the United States. And by labeling him a traitor, Drahota has accused Avery of the crime of treason.

[W]hile we have recounted much of the earlier e-mail . . ., we have done so for background, and to show how what Drahota wrote in June had changed in tone and content. . . . [I]n June, he attempted to hide his authorship, in contrast to the February exchange when he plainly identified himself. And . . . he knew after February 10 that Avery . . . wanted no more e-mail from him. Therefore, our affirmance of the conviction is based on the June e-mails, not the exchange 4 months previously. The evidence is plainly sufficient to sustain the conviction.

I’m not sure that's right. Earlier in the opinion, this court quotes an opinion in which the Nebraska Supreme Court explained what the disturbing the peace crime encompasses:

`The term "breach of the peace" is generic and includes all violations of public peace, order, decorum, or acts tending to the disturbance thereof.'

If I’m right, then I don’t think this charge is valid. It looks to me like it would have been more appropriate to charge Drahota with harassment, unless maybe that’s a felony and they wanted to keep the liability at the misdemeanor level.

The case raises some interesting issues. I’ve already addressed one -- whether this crime requires collective victims or can be committed against an individual. What I actually think is the more interesting issue is the one that’s not at issue here: CAN you predicate a disturbing the peace (in the sense of disturbing peace and order in a community) on what someone does online? In other words, as I sit at my laptop in my study in a suburb, is there some way, if I were so inclined, that I could disturb the peace of my community?

I’m not encouraging anyone to try. I’m just wondering if disturbing the peace is a crime that can only be committed in the real, physical world.

Posted by Susan Brenner at 4:28 PM

Though I'm not sure which court would have jurisdiction, you could likely disturb the peace of an online community, sufficiently for prosecution. While in the Second Life context the community may be too geographically diverse for a court readily to prosecute, I could envision a community focused discussion group, chat room, blog/wiki, etc. where postings, like Drahota's, could rise to the level of disturbing the peace.

Jurisdiction is often a pain in cyber issues, as I'm sure you know, but it could probably be worked out. Second Life's TOS says all disputes are to be settled in a California court, so they set jurisdiction (at least of civil cases) in that state.

Since SL could arguably be the "victim" of the crime, California could have jurisdiction under the principle of criminal law (codified in most states) that a state has jurisdiction to prosecute if a material element of the crime happened there. The victim's presence in the state is usually enough to satisfy that requirement.

Policy is whatever the authority does.
I was arrested for violating a local
policy. when I inquired about policy,
City mayor, chief of police and city attorney decided restraining orders were policy to cover-up policy that they don't want to disclose or produce. That's why LAWS are better than policy. There ought to be a law
against bad policy.

The Nebraska Supreme Court granted a petition to review the decision of the Court of Appeals, and that appeal is pending.

An update on proceedings in the Nebraska Supreme Court....

Fyi, maybe: The Nebraska Supreme Court reversed the Court of Appeals' decision in an opinion issue on September 24, 2010: