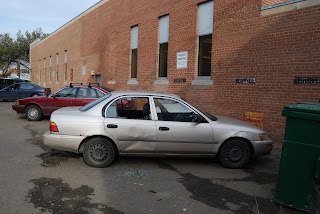 As Wikipedia notes, witness tampering “is harming or . . . threatening a witness, hoping to influence his or her testimony.” Sometimes, it takes the form of trying to convince a witness not to testify at all . . . which was the allegation in State v. Rayment, 2011 WL 4036687 (Washington Court of Appeals 2011).

This is how Troy Rayment came to be charged with, and convicted of, witness tampering in violation of Washington state law:

Rayment and Destiny Armstrong began dating in 2000, and had a child together in 2004. After their relationship ended in 2007, they went to court to resolve the issue of their daughter's custody.

In April 2008, while the custody matter was still pending, Rayment and Armstrong encountered one another at a local tavern. Armstrong testified that Rayment stopped `right in [her] face’ and asked what she was doing there. . . . The pair exchanged angry words and when Armstrong tried to walk away, Rayment once again `got in [her] face.’ . . . Armstrong pushed him away, causing Rayment to stumble and fall onto a table.

When Armstrong left the tavern, she discovered her car windows were broken. The next morning, Rayment sent a text message to Armstrong stating that she was `going to be in big trouble’ for assaulting him. . . . Armstrong responded by accusing Rayment of damaging her car, which he denied.

Over the next month, the pair spoke on the phone and sent text messages to each other several times. Armstrong, upset over having to spend $500 to repair the car window damage, threatened to press charges for malicious mischief. Rayment offered to pay for Armstrong's $500 insurance deductible, sign his car over to her, and also settle the child custody dispute if she would `just drop the charges on him.’ . . .

Rayment texted Armstrong stating, `If u do what i say then i will do what u say.’ The pair believed the malicious mischief charges would be dropped if Armstrong called the prosecutor and said she did not want to press charges or if she simply failed to show up for court.

On May 21, 2008, prosecutors charged Rayment with “third degree malicious mischief-domestic violence” under Washington Revised Code § 9A.48.090(1), but they later dismissed the charge. State v. Rayment, supra. On January 22, 2010, prosecutors “charged Rayment with two counts of witness tampering” under Washington Revised Code § 9A.72.120(1)(a) and (c), which define witness tampering as follows:

`A person is guilty of tampering with a witness if he or she attempts to induce a witness or person he or she has reason to believe is about to be called as a witness in any official proceeding ... to:

(a) Testify falsely or, without right or privilege to do so, to withhold any testimony; or . . .

(c) Withhold from a law enforcement agency information which he or she has relevant to a criminal investigation or the abuse or neglect of a minor child to the agency.’

At trial, Armstrong testified that Rayment tried to convince her not to show up to court on the malicious mischief charge:

`Q. Did he ask you-you had mentioned that he had asked you not to show up in court. Did he tell you that, specifically?

dismissed malicious mischief charge and her fear during the couple's altercation in the tavern. Armstrong's aunt, Judy Estes, testified, over Rayment's objection that Estes would be stating a legal conclusion, that she `believe[d], based on everything that [she] saw, that [Rayment] was attempting to coerce [Armstrong] into getting the charges dropped.’ . . .

During closing argument, the State argued that the jury should find Rayment guilty of two counts of witness tampering if the jurors agreed on any two text messages that met the elements of the charge.

The jury convicted Rayment on both charges and the trial judge sentenced him to “concurrent six-months confinement for both charges.” State v. Rayment, supra.

He appealed, arguing that his

two tampering convictions violate his right to not be put in jeopardy twice for the same offense. U.S. Constitution, amendment V. . . . . Specifically, he argues that his multiple telephone calls and text messages should be treated as one unit of prosecution for double jeopardy purposes.

In ruling on Rayment’s argument, the Court of Appeals first noted that the 5th Amendment to the U.S. Constitution states “that no person `shall be subject for the same offence to be twice put in jeopardy of life or limb.’” State v. Rayment, supra. The court also noted that “[w]hether a defendant faces multiple convictions for the same crime turns on the unit of prosecution.” State v. Rayment, supra.

The Court of Appeals then applied these principles and held that Rayment’s (alleged) conduct at most amounted to one count of witness tampering:

The Court of Appeals then explained that “[n]ormally, the proper remedy would be to reverse one conviction and remand for resentencing.” State v. Rayment, supra. But because it found that the trial judge erred in letting Armstrong’s aunt testify that she believed Rayment was trying to persuade her niece not to testify, it reversed his conviction and remanded the case for “further proceedings consistent with this opinion.” State v. Rayment, supra.

The court found it was error to admit Estes’ testimony because a witness’ opinion as to a defendant’s guilt is “reversible error when such evidence violates the defendant’s constitutional right to a jury trial by interfering with the independent determination of the facts by the jury.” State v. Rayment, supra.

It noted that “Rayment's vague text messages and Armstrong's equivocal, indefinite testimony” that he asked her “to do a number of things is not so overwhelming as to convince us beyond a reasonable doubt that the jury likely would have reached the same result without Estes's improper opinion testimony.” State v. Rayment, supra.

So the prosecutors can either start over or give up on this one.

Posted by Susan Brenner at 4:05 PM

Had a retrial in Apr. 2012. Troy was convicted again, this time on 1 count of witness tampering.
Comment from,
Miss Armstrong :)

I wonder where the random car photo came from. My car he damaged was a black Jetta.