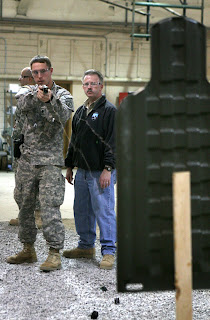 In law, witnesses essentially fall into two categories: expert and lay witnesses. As Wikipedia notes, in trials, hearings and other proceedings, an expert witness is a witness

who by virtue of education, training, skill, or experience is believed to have expertise and specialised knowledge in a particular subject beyond that of the average person, sufficient that others may officially and legally rely upon the witness's specialised . . . opinion about an evidence or fact issue within the scope of his expertise, referred to as the expert opinion, as an assistance to the fact-finder.

As another source explains, a lay witness is “any witness who does not testify as an expert witness.

This post is about a case in which a question was raised as to whether an officer testified as an expert witness or as a lay witness.

The case is Clarett v. Roberts, __ F.3d __, 2011 WL 4424790 (U.S. Court of Appeals for the 7th Circuit 2011) and, as the title suggests, it’s a civil case, not a criminal prosecution. More precisely, it’s a civil rights suit brought under 42 U.S. Code § 1983. As I’ve noted in earlier posts, § 1983 creates a cause of action for those who claim their constitutional rights have been violated by “state action,” e.g., conduct of law enforcement officers. The plaintiff in this case – Patricia Clarett – brought a § 1983 suit in which she alleged she had been the victim of “excessive force and false arrest in violation of the Fourth Amendment”. Clarett v. Roberts, supra.

This, according to Clarett, is how the case arose:

Early . . . on October 11, 2005, officers with the Lynwood [Illinois] Police Department received a report that a suspicious vehicle was making unusual, repeated trips to and from a garage. Officers dispatched to the neighborhood saw a vehicle . . . matching the caller's description. The officers stopped the vehicle and in it found Clarett, her boyfriend, and her sons Patrick and Anthony Peters. The officers also noticed an air compressor in the vehicle; none of the occupants of the vehicle claimed to own the compressor, so the officers confiscated it.

Soon thereafter, Lynwood police received a call reporting a garage burglary. Among the items reported stolen was an air compressor whose model number matched the one recovered from Clarett and her sons. Lynwood officers went to Clarett's home in Lansing to try to talk with her sons, but they first called the Lansing Police Department for backup.

At trial. . . . Clarett testified that when the officers asked to speak with her sons, she asked them to remain at the door while she woke them. Despite her request that they wait outside, the officers -- including several she claimed were hiding out of her sight -- entered her home immediately. When she asked them again to wait outside, Officer Steven Roberts used his Taser to immobilize her, causing intense pain. Roberts was six feet away, and he used the setting on the Taser that caused barbs to project from the device and attach to Clarett.

Clarett testified that once she regained muscle control, she tried to run. . . . The Taser barbs were still attached to her, however, and Roberts shocked her a second time. The second deployment caused Clarett to fall in the hallway. Clarett testified that Roberts deployed the Taser a third time, totally without provocation.

The officers said they entered her home with her permission, none of them were hiding, she gave them permission to enter her sons’ bedroom, which they did; soon after, “a dispute arose”, as a result of which Clarett ran past officers who were still in her living room and blocked their entry to the sons’ bedroom. Clarett v. Roberts, supra. Roberts testified that he told her to move several times but she did not, after which he told her he would use the Taser if she didn’t and, when she still refused to move, Tasered her for five seconds. Clarett v. Roberts, supra. He said she kicked at him when he tried to help her up, so he Tasered her again; he decided to arrest her for obstruction but when he tried to handcuff her she “started to yell and flail her arms,” after which he Tasered her a third time. Clarett v. Roberts, supra.

On appeal, she argued that the federal district court judge who presided over the trial erred in letting Roberts testify as to certain aspects of the Taser’s deployment. Clarett v. Roberts, supra. More precisely, Clarett argued that the judge erred by

allowing Officer Roberts, a lay witness, to offer expert testimony. Roberts was questioned about an inconsistency between the number of times he Tasered Clarett and the digital register retained in the Taser's internal memory. The parties agreed that Roberts Tasered Clarett three times and that each shock lasted for five seconds.

But the printout from the Taser's digital memory recorded six separate deployments of the Taser, some just one second apart. When Clarett's counsel asked Roberts about the discrepancy, he disclaimed technical knowledge about the mechanics of the Taser or the computer download that produced the printout.

The opinion also points out that

[u]nder questioning from his own counsel, . . . Roberts testified that based on his experience and training, it would be physically impossible to discharge the Taser multiple times just one second apart. He also testified more generally about the Taser printout, which registered 585 separate deployments occurring over the span of more than a year. He also said that `[a]fter reviewing this printout, there does appear to be many different malfunctions in the printout.’

At trial, Clarett’s lawyer move to exclude Roberts’ testimony, arguing that he was not an expert on Taser technology, but the district court judge held that

`I don't need to hear any more, his strikes me as very similar to the driver an automobile who testified that she looked at her speedometer and she was going 50 miles an hour at the time of the collision. She is not an expert as to how that speedometer works or whether it was accurate, but to say that she has to be in order to testify to what the speedometer says would be ridiculous.’

On appeal, the defendants explained that when he was testifying, Roberts was shown, and asked about a printout of a download from the Taser in question’s memory:

On appeal, Clarett argued that the judge improperly allowed Roberts to testify as an expert, rather than a lay, witness. Clarett v. Roberts, supra. Clarett also argued that the judge allowed Roberts to testify as an expert witness without satisfying the requirements Rule 702 of the Federal Rules of Evidence impose on the admission of expert testimony. Clarett v. Roberts, supra. Rule 702 provides as follows:

If scientific, technical, or other specialized knowledge will assist the trier of fact to understand the evidence or to determine a fact in issue, a witness qualified as an expert by knowledge, skill, experience, training, or education, may testify thereto in the form of an opinion or otherwise, if (1) the testimony is based upon sufficient facts or data, (2) the testimony is the product of reliable principles and methods, and (3) the witness has applied the principles and methods reliably to the facts of the case.

The Court of Appeals rejected Clarett’s argument and held that Roberts did not testify as an expert witness (which, of course, meant Rule 702 was not at issue):

Roberts did not give technical testimony about how the Taser's internal memory operated or how data was uploaded from the Taser to the police department's central computer—subjects that no doubt would have required some form of properly qualified expert testimony under Rule 701. Rather, his testimony was limited to his own experience in operating the Taser.

He explained the steps required to fire the Taser in order to illustrate the incongruity of rapid, successive deployments only one second apart. Neither this testimony, nor his discussion of the Taser printout, was couched in terms of an expert opinion.

In dicta, the Court of Appeals explained that

[e]ven if this testimony crossed the line into the domain of expert opinion, its admission was harmless. Rule 103(a) of the Federal Rules of Evidence (`Error may not be predicated upon a ruling which admits or excludes evidence unless a substantial right of the party is affected”’); Liu v. Price Waterhouse LLP, 302 F.3d 749 (7th Cir. 2002) (`[A]n error is harmless if it did not contribute to the verdict in a meaningful manner.’).

The parties agreed that Roberts deployed the Taser three times for five seconds each; had there been a dispute on this subject, the evidence of the Taser printout discrepancy might have been more important. As it was, in light of the parties' agreement, this discrepancy had little significance. . . .

Indeed, the judge might have excluded the evidence of the Taser printout on grounds of irrelevancy; once the issue was raised, however, it was not an abuse of discretion to permit Roberts to testify about it to the limited extent that he did.

For this and other reasons, the Court of Appeals upheld the jury’s verdict in favor of the officers. Clarett v. Roberts, supra.

just think she could have avoided it all if she had just exercised her constutional right to defend her home and capped his tail once he stepped over the door step with no warrent in hand!

got to love how the cops all testilie'd to cover up that little fact!