Delay in Obtaining Search Warrant Was Not “Reasonable” 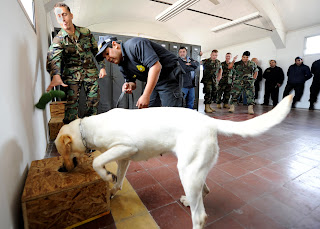 As Wikipedia explains, and as I’ve noted in earlier posts, the 4th Amendment creates a right to be free from “unreasonable” searches and seizures. As I’ve also noted, to be “reasonable” a search and/or seizure must be conducted pursuant to a search (and seizure) warrant or to an applicable exception to the warrant requirement. Wikipedia reviews the exceptions to the warrant requirement, if you’re interested.

This post examines a case in which the problem wasn’t that the officer who was responsible for the search didn’t get a warrant . . . it was the amount of time it took to get the warrant.

The case is U.S. v. Riccio, 2011 WL 4434855 (U.S. District Court for the Southern District of California 2011) and the opinion we’re concerned with addresses whether evidence should be suppressed because of the time it took to get a warrant to search a hard drive. All I know about the underlying facts and charges is that on

As Wikipedia notes, the Federal Rules of Criminal Procedure are the “rules that govern how federal criminal prosecutions are conducted in United States district courts, the general trial courts of the U.S. government.” And as a federal judge noted, the Federal Rules of Criminal Procedure do not expressly provide for the filing of a motion asking a judge to reconsider a ruling, but “the Supreme Court, in dicta, has recognized that such motions may be used in criminal proceedings.” U.S. v. Hough, 2011 WL 900111 (U.S. District Court for the District of New Jersey 2011). In U.S. v. Dieter, 429 U.S. 6 (1976), the Supreme Court cited “the wisdom of giving district courts the opportunity promptly to correct their own alleged errors,” an observation district court judges have construed as allowing them to rule on motions seeking reconsideration of an earlier ruling.

That brings us back to the Riccio case. All I know about how the government obtained Riccio’s hard drive is that “Officer Campbell” seized it under these circumstances:

The initial [seizure] was a result of private action and did not violate the 4th Amendment because of its private character. Officer Campbell had probable cause to seize the hard drive based upon the information provided by the private search. . . . The finding of probable cause to seize the hard drive did not relieve law enforcement of its obligation to `diligently’ obtain a [search] warrant. . . . [Riccio] did not consent to the seizure of his hard drive by Officer Campbell and maintained a possessory interest in his hard drive which contained family photos.

As I explained in an earlier post, the 4th Amendment doesn’t protect you from searches (and seizures) conducted by private citizens; it only protects you from “state action,” i.e., from searches (and seizures) conducted by law enforcement officers. From what the court said above, I’m assuming a private citizen who had access to Riccio’s hard drive found some type of incriminating evidence on it and somehow gave Officer Campbell access to the drive, so he could seize it. If that’s true, then the seizure, as the court notes above, doesn’t implicate the 4th Amendment . . . but the subsequent search would.

Now we come to the delay that was the basis of the court’s earlier ruling:

Detective Righthouse testified that she had other ongoing active cases; and that she gave priority to cases involving live juvenile victims, cases involving adult witnesses or victims, and cases that involved anyone in custody. Detective Righthouse did not testify that her workload or her case priorities prevented her from seeking a search warrant before June 23, 2009.

The Government did not present any specific facts to explain the necessity of the seventy-five day delay in seeking a warrant. The affidavit in support of the warrant prepared by Detective Righthouse primarily relied upon the report of Officer Campbell and facts obtained early in the investigation. There are no facts or circumstances advanced by the Government from which the Court can conclude that the seventy-five day period was necessary in order for Detective Righthouse to obtain the state search warrant.

In the original ruling on Riccio’s motion to suppress whatever was found on the hard drive, the court found that the

ninety-one day delay in obtaining a warrant was not reasonable. The warrant requirement protects against unreasonable assertions of executive authority and assures that any seizure will be independently evaluated by a neutral magistrate. . . . The Court concludes that the 4th Amendment rights of [Riccio] were violated by the seizure and that the evidence obtained from the hard drive must be suppressed as a direct result of the constitutional violation. [Riccio’s] motion to suppress the evidence from the hard drive seized from Paddock is granted.

U.S. v. Riccio, supra. (Paddock is presumably the private citizen I referred to above.) The judge also found, in this original ruling, that the evidence found on the hard drive “prompted the decision by Detective Righthouse to seek a federal warrant to search” Riccio’s home, where she apparently found evidence that was to be used against him in this prosecution. U.S. v. Riccio, supra.

In asking the court to reconsider its order granting the motion to suppress, the federal prosecutor(s) argued that the district court judge

committed a significant error of law in finding that [Riccio] retained any possessory interest in his computer after Officer Campbell opened a file on the computer and discovered child pornography. The Government asserts that the actual discovery of child pornography by Officer Campbell eliminated any lawful possessory interest in the computer and that any delay in obtaining a warrant cannot, as a matter of law, form the basis for suppression. In addition, Plaintiff United States of America asserts that any delay in obtaining a search warrant was the result of simple negligence. Plaintiff United States asserts that the exclusionary rule should not be applied to the evidence obtained from the federal search warrant based upon Herring v. U.S., 555 U.S. 135 (2009).

U.S. v. Riccio, supra. In Herring, the Supreme Court held, after balancing the possible deterrent effects of applying the exclusionary rule against “its substantial social costs”, that the rule did not apply when police action was based on a “negligent” error in failing to update a computer database to show that an arrest warrant had been recalled.

Riccio argued, in response, that the

order suppressing evidence was made in accordance with law. [He] asserts that the viewing a single image of child pornography by Officer Campbell did not permit indefinite detention of the computer or an unreasonable delay in obtaining a search warrant. [Riccio] contends that the delay in this case violated the law and that suppression is the proper sanction.

Warrantless seizure is reasonable for a `time period . . . no longer than reasonably necessary for police, acting with diligence, to obtain the warrant.’ Illinois v. McArthur, 531 U.S. 326 (2001). Even a seizure based upon probable cause can violate the 4th Amendment if law enforcement does not act `diligently’ in securing a warrant. U.S. v. Dass, 849 F.2d 414 (U.S. Court of Appeals for the 9th Circuit 1988).

This Court has concluded that the discovery of a single file containing child pornography by a law enforcement officer justified the warrantless seizure of the hard drive but does not conclude that this discovery negates any requirement to act with diligence to secure a warrant. . . . Based upon the facts and the reasons stated in the order filed on August 5, 2010, the motion to reconsider the order that `Defendant's motion to suppress the evidence from the hard drive seized from Paddock is granted’ is denied.

U.S. v. Riccio, supra. So Riccio won, which might very well mean that the case is effectively over.

To perhaps put the issues in this case into context, in U.S. v. Tapia, 2011 WL 1260082 (U.S. District Court for the District of Minnesota 2011), Mark Meyer, an officer with the Minneapolis St Paul International Airport Police got a call from UPS, which said it was “holding a suspicious package at its airport processing center.” Meyer went to the UPS center with a trained drug dog, which alerted “to the presence of narcotics” when he was exposed to the suspicious package. U.S. v. Tapia, supra.

Since it was Saturday, Meyer went back to the “stationhouse and put the package into a locked office for the rest of the weekend”. U.S. v. Tapia, supra. On Monday, he applied for and obtained a search warrant for the package; when he opened it pursuant to the warrant, he found methamphetamine, which led to charges against Tapia. U.S. v. Tapia, supra.

Tapia moved to suppress the drugs found in the package, making an argument similar to the one Riccio made. The Minnesota district court judge denied his motion (i) because the seizure of the package was lawful (the dog’s alert gave Meyer reasonable suspicion to seize it and hold it for a reasonable period of time) and (ii) Meyer “[l]aw enforcement acted with due diligence” in detaining the package for “one and a half days pending their acquisition of a search warrant for” it. U.S. v. Tapia, supra.

The 91 day delay in the Riccio case might have qualified as “due diligence” in obtaining a warrant if the officer had been able to point to compelling circumstances that justified the delay. Absent such circumstances, the delay wasn’t “reasonable,” and, as I noted earlier, the 4th Amendment demands “reasonableness” in seizures and in searches.
Posted by Susan Brenner at 10:59 AM