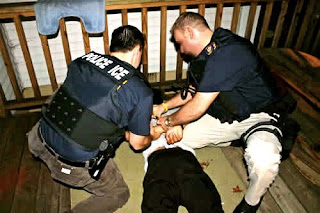 On December 15, 2009, the Supreme Court of Ohio decided State v. Smith. You can find the opinion here. The Smith court addressed an issue I’ve done posts on before: whether officers who arrest someone can search the contents of her cell phone without first obtaining a search warrant.

As I explained in an earlier post, when someone is arrested in a manner that does not violate the Fourth Amendment (i.e., with an arrest warrant in their home, with or without an arrest warrant anywhere else), that triggers an exception to the 4th Amendment’s requirement that officers obtain a warrant before conducting a search of a person or place.

As I’ve explained, the exception is known as the “search incident to arrest” exception and it lets an officer search (i) the person being arrested (including the contents of pockets, etc.) and (ii) the immediate area (the lunge area) into which they could reach for weapons or to destroy evidence. As I think I’ve also noted, an officer doesn’t have to articulate facts establishing that the lunge area search was necessary in a given case; those justifications for conducting a search incident of the lunge area are blanket policies that automatically justify such a search.

As I’ve noted in earlier posts, courts have been grappling with whether the search incident exception lets an officer turn on a cell phone (or a Blackberry or other device) and search through the data it contains. Defendants in a number of cases have argued that while the officer can seize the cell phone (to ensure the arrestee can’t use it as a weapon or destroy evidence it contains), the officer should have to get a search warrant to go through its contents. So far, that argument hasn’t done very well. As a federal judge noted earlier this year, “a number of courts have held that the contents of a cell phone, such as text messages, the call log, and the address book, may be examined as a search incident to arrest. Brady v. Gonzalez, 2009 WL 1952774 (U.S. District Court for the Northern District of Illinois 2009).

And that brings us back to State v. Smith. Here are the facts that led to Smith’s arrest:

On January 21, 2007, Wendy Thomas Northern was transported to Miami Valley Hospital after a reported drug overdose. While at the hospital, she was questioned by Beavercreek police. Northern agreed to call her drug dealer, whom she identified as . . . Antwaun Smith, to arrange for the purchase of crack cocaine at her residence. Beavercreek police recorded the cell phone conversations between Northern and Smith arranging for the purchase.

That evening, the Beavercreek police arrested Smith at Northern’s residence. During the arrest, police searched Smith and found a cell phone on his person. The arresting officer put the cell phone in his pocket and placed Smith in a cruiser, then searched the scene for evidence. Later, police recovered bags containing crack cocaine at the scene.

While the record does not show exactly when they first searched Smith’s cell phone, at some point police discovered that the call records and phone numbers confirmed that Smith’s cell phone had been used to speak with Northern. There was testimony that at least a portion of the search took place when officers returned to the police station and were booking into evidence the items seized from the crime scene. The police did not have either a warrant or Smith’s consent to search the phone.

After being indicted for cocaine trafficking and several related crimes, Smith moved to suppress evidence obtained from his cell phone. The trial court held that it would allow

testimony regarding the cell phone’s call records and phone numbers but would not allow use of photographs that had been discovered in the phone. The trial court based its decision on a decision from the Fifth Circuit, in which cell phones were likened to containers found on an arrestee’s person and subject to search for the preservation of evidence for use at trial. U.S. v. Finley (C.A.5, 2007), 477 F.3d 250.

In its decision, the Ohio Supreme Court noted that the “two leading cases” on this issue are the U.S. Court of Appeals’ decision in U.S. v. Finley, supra, and the U.S. District Court for the Northern District of California’s decision in U.S. v. Park, 2007 WL 1521573 (2007). It noted that the defendant in the Finley case “had conceded that a cell phone was analogous to a closed container” for the purposes of 4th Amendment analysis. State v. Smith, supra. The Supreme Court noted that “[b]ecause Smith does not concede here that a cell phone is analogous to a closed container, the analysis in Finley is not entirely applicable” in the Smith case. State v. Smith, supra.

This district court reasoned that modern cell phones “have the capacity for storing immense amounts of private information” and thus likened the devices to laptop computers, in which arrestees have significant privacy interests, rather than address books or pagers found on their persons, in which they have lesser privacy interests. . . Because the search of the cell phone’s contents was not conducted out of concern for the officer’s safety or to preserve evidence, the court found that it did not fall under the search-incident-to-arrest exception and that the officers should have obtained a warrant to conduct the search.

The Smith prosecutor argued that the Ohio Supreme Court should follow the decision in Finley because “a cell phone is akin to a closed container and is thus subject to search upon a lawful arrest.” State v. Smith, supra. The court declined to do so:

Even the more basic models of modern cell phones are capable of storing a wealth of digitized information wholly unlike any physical object found within a closed container. We thus hold that a cell phone is not a closed container for purposes of a Fourth Amendment analysis.

[T]here are legitimate concerns regarding the effect of allowing warrantless searches of cell phones, especially so-called smart phones, which allow for high-speed Internet access and are capable of storing tremendous amounts of private data. While . . . Smith’s cell phone could not be called a smart phone . . . , it is clear . . . that [it] had phone, text messaging, and camera capabilities. . . . [I]n today’s advanced technological age many `standard’ cell phones include a variety of features above and beyond the ability to place phone calls. Indeed, like Smith’s phone, many cell phones give users the ability to send text messages and take pictures. Other modern `standard’ cell phones can also store and transfer data and allow users to connect to the Internet.

State v. Smith, supra. The court then held that cell phones and similar devices cannot be searched pursuant to the search incident exception; instead, an officer must obtain a search warrant:

Given their unique nature as multifunctional tools, cell phones defy easy categorization. On one hand, they contain digital address books very much akin to traditional address books carried on the person, which are entitled to a lower expectation of privacy in a search incident to an arrest. On the other hand, they have the ability to transmit large amounts of data in various forms, likening them to laptop computers, which are entitled to a higher expectation of privacy.

But cell phones are. . . . more intricate and multifunctional than traditional address books, yet they are still, in essence, phones, which makes them distinguishable from laptop computers. Although cell phones cannot be equated with laptop computers, their ability to store large amounts of private data gives their users a reasonable and justifiable expectation of a higher level of privacy in the information they contain. Once the cell phone is in police custody, the state has satisfied its immediate interest in collecting and preserving evidence and can take preventive steps to ensure that the data found on the phone is neither lost nor erased. But because a person has a high expectation of privacy in a cell phone’s contents, police must then obtain a warrant before intruding into the phone’s contents.

IMHO, the Ohio Supreme Court got this one right. Now, as I’ve said before, I want to see how a court deals with whether the search incident exception applies to a laptop. The exception will be triggered when (i) Jane Doe is arrested and (ii) either is carrying her laptop (on her shoulder, say) or has the laptop next to her at the moment she’s arrested. As I noted earlier, the exception encompasses the person and whatever they’re carrying plus the immediate area around the person at least when they’re not arrested in a vehicle.

(The scope of a vehicle area search incident is a little murky since the U.S. Supreme Court’s decision in Arizona v. Gant, 129 S.Ct. 1710 (2009). The Smith Court cites Gant once, in passing, but doesn’t rely on Gant in its holding.)

Great post Susan! I have been examining cell phones since 2005 and I concur with your assessment of the reality of the Incident to Arrest Exception for Cell Phones. I also agree with the court ruling in this case.

i like your article. i'll save it on my browser's bookmark. thx.