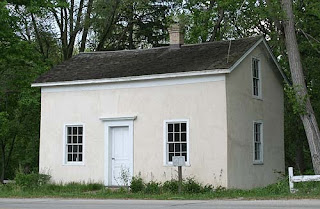 As I’ve noted in earlier posts, the test courts use to determine if two crimes are the same is the Blockburger test. In Blockburger v. United States, 284 U.S. 299, 304 (1932), the Supreme Court held that the test is “whether each provision requires proof of a fact which the other does not.”

This post is about a case in which the defendant raised what wasn’t technically a Blockburger argument, but was based on substantive similarities between what were alleged to be two crimes.

Ross contacted the Salina police. Two officers were sent to the property [and] spoke with Jackson. . . . [who] admitted he had been living [there]. Jackson showed one of the officers a lease agreement, which Jackson said allowed him to live in the house. . . .

Lieutenant Salzman. . . . noticed that the landlord's signature appeared to be computer generated. . . . [and] Ross told police she had not rented the property. . . . Salzman told Jackson he did not think the lease agreement was real. Jackson [said] the person he was renting from . . . had drafted the agreement using a computer at the public library.

At the police station, Jackson told Officer Melissa Short that before he lived at Ross’ house he was homeless for 18 months and was looking for a place to stay when he was approached by Beiker, who told Jackson he purchased a residence and would lease it to Jackson if Jackson would be willing to do some work on it. State v. Jackson, supra.

Jackson [said] he contracted with Beiker to pay a $400 deposit and $400 monthly rent plus utilities for the residence. . . . Jackson [said] Beiker had not been familiar with how to draft a lease agreement so they had drafted the documents at the library. Short asked Jackson about . . . inconsistencies between the lease and his statements to the police, including the amount of the deposit and rent, the date Jackson was supposed to take possession of the property, and the fact that Beiker's signature appeared to be type. . . . Short later testified that Jackson was unable to . . . explain the inconsistencies.

Jackson was charged with and convicted of one count each of criminal trespass, criminal damage to property, computer crime and forgery. State v. Jackson, supra. Jackson challenged all of the convictions in his appeal to the Kansas Court of Appeals, but we’re only concerned with the forgery and computer fraud counts.

Jackson claimed “there was insufficient evidence for the jury to convict him of forgery because the State failed to prove he had intended to defraud anyone.” State v. Jackson, supra. To find Jackson guilty of forgery under Kansas Statutes § 21-3710(a)(1), the prosecution had to prove each of these elements beyond a reasonable doubt:

1. That Jackson knowingly made, altered, or endorsed a residential lease package so it appeared to have been made or altered by Nijeil Beiker, who did not give such authority;

2. That Jackson did this act with the intent to defraud; and

Kansas Statutes § 21-3110(9) defines intent to defraud as “an intention to deceive another . . . and induce such person . . . to assume, create, transfer, alter or terminate a right, obligation or power with reference to property.” Jackson claimed the evidence was not sufficient to prove

an intent to defraud because the person to whom he intended to show the lease agreement had no authority to `assume, create, transfer, alter or terminate a right, obligation or power with reference to’ the [Ross] property. Jackson contends that although the evidence might have showed that he created the lease agreement `as a ruse to dupe any community member or police officer who questioned his right to be in the house,’ such a scheme was not done with an intent to defraud.

Moreover, the police officers to whom Jackson showed the lease agreement did not have the power to assume, create, transfer, alter, or terminate a right, obligation, or power with reference to the Chester property. The lease agreement was created for and was used to cover up the illegal occupation of Ross' property.

Jackson then argued that if the Court of Appeals agreed that there was “insufficient evidence to convict him of forgery,” it should also find “that the State failed to present sufficient evidence that he committed a computer crime.” State v. Jackson, supra.

To convict him of computer crime under Kansas Statutes § 21-3755(b)(i)(B), the prosecution had to prove beyond a reasonable doubt that Jackson used a computer for the purpose of devising or executing a scheme or artifice with the intent to defraud or for the purpose of obtaining property, services or any other thing of value by means of false or fraudulent pretense or representation. State v. Jackson, supra. Jackson argued that in deciding whether the evidence was sufficient to prove computer crime, “the only document” the Court of Appeals could consider was the lease agreement. State v. Jackson, supra. His theory was that “the only scheme the jury found the State had proven beyond a reasonable doubt involved the creation of the lease agreement on the library’s computer.” State v. Jackson, supra.

State v. Jackson, supra. The Court of Appeals therefore held that the evidence was sufficient to prove Jackson’s guilt beyond a reasonable doubt. He had shown the

lease agreement to the police and several documents were found within the residence, including two letters allegedly from Ross, an owner's . . . affidavit, and a quit claim deed. All the documents appeared to have been computer generated. . . . Jackson admitted . . . he used his computer and the library computer to generate one of the documents. The . . . documents were part of a scheme . . . to illegally inhabit the . . . property. . . .

[T]he jury could have found Jackson created the quit claim deed and owner's (seller's affidavit) `for the purpose of obtaining property, services or any other thing of value by means of false or fraudulent . . . representation’. . . .

`Fraudulent representation’ . . . is a `false statement that is known to be false. . . and is intended to induce a party to detrimentally rely on it.’ Black's Law Dictionary 1022 (8th ed.2004). . . . Why would Jackson create a quit claim deed and an owner's affidavit with Ross' signatures if he did not intend to assert a property right at a future date and obtain services or money for the property? A lease agreement alone would have been enough for Jackson to cover up his illegal occupation of the property. . . .

State v. Jackson, supra. One thing this opinion illustrates is how the facts in a case can support a variety of charges. Another is how fraud and forgery can have very similar elements; here, both the forgery and fraud (computer crime) offenses required an intent to defraud and incorporated the same statutory definition of that term. Despite their similarities, they are not the same offense under Blockburger because each includes an element the other does not; forgery requires the alteration of a document while fraud (computer crime) requires the use of a computer.