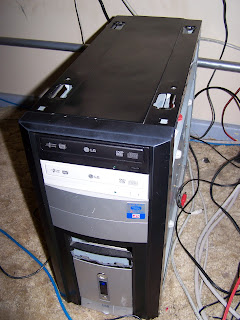 When Jeffrey Shane Wise was convicted of “multiple counts of sexual assault [counts 1-4]; possession of child pornography [count 5]; indecency with a child [count 6]; and ten (10) additional counts of possession of child pornography [counts 8-17]”, he appealed to the Texas Court of Criminal Appeals (which I’ll refer to as the “Court of Appeals”). State’s Brief on Appeal, State v. Wise, 2011 WL 5868044.

This, according to the prosecution’s brief on appeal, is how the case arose:

In the spring of 2007, when C.H. was sixteen years old, she began working at a McDonald's restaurant in Wichita Falls. Wise, who was in his forties, was her manager, and because she did not have a car and worked until late at night, he occasionally gave her a ride home. . . . One day, Wise took C.H. to his house, where they engaged in sexual intercourse. Wise and C.H. had many other sexual encounters . . . . Also, C.H. took pictures of herself naked on a digital camera and on Wise's cell phone and gave them to him. . . .

A search warrant was subsequently obtained. . . . Pursuant to that warrant a Gateway computer was seized. . . .  Child pornography images were found in the free space on the hard drive of the Gateway computer. . . .

On appeal, Wise conceded that the images found on his Gateway computer were child pornography, but claimed the prosecution failed to prove beyond a reasonable doubt that he “intentionally or knowingly possessed” them. Wise v. State (2011).  Counts 8-17 charged him with violating Texas Penal Code § 43.26 by “knowingly or intentionally” possessing child pornography. Wise v. State (2011).

In reviewing Wise’s argument as part of his appeal, the court noted that one acts

intentionally with respect to the nature of the conduct when the person has a conscious objective or desire to engage in the conduct; a person acts knowingly when he is aware of the nature of his conduct. Texas Penal Code § 6.03(a), (b). . . . Possession means actual care, custody, control, or management of the thing possessed. Texas Penal Code § 1.07(a)(39). . . . Proof of a culpable mental state almost invariably depends upon circumstantial evidence.

At Wise’s trial, Amy Trippel, “the digital forensics examiner who searched the Gateway tower,” testified that she was asked to look for “`pornography and chat logs’”, among other things. Wise v. State (2011).    She found ten child pornography images “in the computer's free space, which is unallocated space that is marked as available for use.” Wise v. State (2011). Trippel said “files go into the free space upon deletion” and described free space as being

In her testimony Trippel also explained that there was

no way to know where the image files came from, how they were placed on the computer . . .  or when they were created, modified, or viewed. Trippel indicated that the Gateway tower contained various viruses and that some viruses could make it possible for pornography to be stored on a computer without the user's knowledge; that anyone using a virus to place the images in free space would not be able to access them; that files placed into free space remain there until they are written over by other files; and that when a cached temporary internet file is deleted, it goes into free space, at which time a forensic examiner cannot tell when the file was viewed. Wise's brother testified that Wise purchased the computer at a flea market in August 2006.

As noted above, Wise argued that the evidence presented to support counts 8-17 was “insufficient because the images in question were stored in free space `and the [S]tate failed to show that he had ever seen them or had any access to them.’” Wise v. State – 2011  The original Court of Appeals agreed:

[T]he uncontroverted testimony that Wise bought the computer second-hand at a flea market and the State's own expert witness's testimony admitting that the computer contained viruses capable of covertly placing images on the computer; that Wise could not access the images; and that it was impossible to determine when the images were placed on to, accessed, or deleted from, the computer, do not meet the State's burden to prove beyond a reasonable doubt that Wise knowingly or intentionally possessed the images. . . .

[T]his evidence, even when viewed in the light most favorable to the verdict, could not lead a rational jury to find that Wise intentionally or knowingly possessed the child pornography images found in the free space of his computer. . . Thus, we hold that the evidence is insufficient to support Wise's convictions in counts eight through seventeen of the indictment, and we sustain Wise's second point.

The en banc court began its analysis of the sufficiency of the evidence issue by noting that the evidence showed that Wise, “who did not have technical skills in computer programming,” was “presently unable to access the deleted files that were in the free space of the computer.” Wise v. State (2012). It also noted that because Wise was not “presently able to access the images”, to convict him the jury “would have had to determine that, before the images were deleted, [Wise] knowingly or intentionally had care, custody, control, or management” of them.  Wise v. State (2012).

The court then explained that the prosecution “correctly” pointed out that the original appellate court “erroneously focused on two alternative hypotheses that the images could have been placed on the computer without [Wise’s] knowledge either through (1) a virus or (2) a previous owner of the computer.”   Wise v. State (2012).  As to the virus, the en banc panel found that the original appellate court erroneously credited Wise’s

suggestion that viruses on his computer could have placed the images there, but the jury could reasonably have disregarded that evidence. . . .  Trippel did acknowledge . . . that there were several viruses on [Wise’s] computer and that some viruses are capable of placing images on a computer without a user's knowledge. She . . . also testified that it was unlikely that the presence of viruses would explain the presence of the images in the free space of a computer. Her testimony was as follows:

`[Witness]: Well, there would be no file location to—‘

`[Witness]:—to show where the pointer was to where that file was.’

`[State]: Okay. Because it could go anywhere on your computer, you don't know?’

The en banc court therefore found that because “the placement of a pornographic image on the free space of a computer would be inconsistent with the purpose for placing a virus on a computer, the jury could have reasonably disregarded that explanation for the presence of the images.”  Wise v. State (2012).  In other words, it would not necessarily have negated the premise that Wise intentionally or knowingly possessed the images.

The court then found that the original Court of Appeals also “erred” by “crediting [Wise’s] suggestion that the images could have been placed on the computer by a prior owner of the computer and finding that to be an alternative hypothesis inconsistent with [his] guilt.”  Wise v. State (2012).  As the source of error, it noted that Wise’s brother testified that he bought the computer at a flea market in 2006, but pointed out that the jury could have

determined that [Wise’s] brother's testimony was biased in light of his relationship with [Wise]. Furthermore, the brother provided few details about the purchase; he did not explain from what vendor the computer was purchased, how it was paid for, or whether any receipt confirmed this claim. The jury could have reasonably determined that [Wise’s] brother's generic description of a sale by an unidentified vendor at an unknown flea market was not the type of information that could be readily controverted by the State or reliable evidence. Uncontroverted evidence does not necessarily equate to credible evidence. . . .

In addition to finding that the original Court of Appeals erroneously focused on these “alternative hypotheses” that negated guilty, the en banc court also found that it erred

The en banc court found the jury “could have reasonably determined from the extensive evidence, which showed [Wise] had a proclivity for child pornography and a prurient interest in children, that he knowingly and intentionally possessed the images that were in the free space of his computer before [they] were deleted.”  Wise v. State (2012). As to Wise’s “prurient interest in children,” the court noted that he had “an improper sexual relationship with a 16-year-old” and his stepdaughter testified at trial that he “performed sexual acts on her” when she “was under 10 years old”.  Wise v. State (2012).  As to his “proclivity for child pornography,” it noted that the jury “could reasonably have inferred from his possession of “temporary internet files suggesting visits to websites with child pornography” in 2007 and 2008 that he “knowingly and intentionally had possession of the other child pornography in the free space of his computer.”  Wise v. State (2012).

The en banc Court of Appeals therefore reversed the judgment of the prior Court of Appeals and affirmed Wise’s conviction and sentence.  Wise v. State (2012).
Posted by Susan Brenner at 8:07 AM

If the images were of unknown people, how could the cops say that they were really actual children, as opposed to fake children?