The Desk, the School Resource Officer and the 4th Amendment 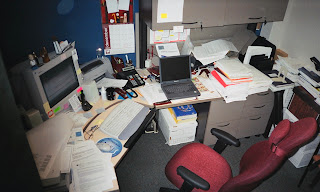 According to the news story you can find here, Johnson “faces 7 counts of mail fraud and one count of lying to a federal agent.”  The story also says he is “accused of stealing items from local stores, reselling them on e-bay, and pocketing almost 200 thousand dollars.”

In his motion to suppress, Johnson, “an officer with the Monroe [Louisiana] City Police Department (`MPD’),” challenged “two searches by law enforcement: (1) a search of the police cruiser assigned to him for use as a school resource officer and (2) a search of his desk at Carroll Junior High School.”  U.S. v. Johnson, supra.  This is all the opinion says about the searches:

By the time they searched Johnson's desk at Carroll Junior High School on February 20, 2009, Sergeant Roark and Agent Chesser had been involved in a joint criminal investigation of Johnson for six months. . . .

The opinion also notes that the “evidence obtained from Johnson's desk included a debit card, bank statements and a laptop computer.”  U.S. v. Johnson, supra.  So I’m assuming his motion to suppress sought to prevent the government from using any of this evidence against him.

This opinion is written by a U.S. District Court judge who is ruling on a Report and Recommendation issued by a U.S. Magistrate Judge.  U.S. v. Johnson, supra.  As Wikipedia explains, in “the United States federal courts, magistrate judges are appointed to assist United States district court judges in the performance of their duties.”  District court judges often refer matters – such as a motion to suppress – to a Magistrate Judge, who reviews the briefs submitted by the parties and may hold an evidentiary hearing, after which he/she issues a Report and Recommendation to the District Court Judge.

The Magistrate Judge in this case issued a Report and Recommendation in which she recommended that the District Court judge “grant the motion in part and deny the motion in part.”  U.S. v. Johnson, supra.  More precisely,

[w]ith regard to the police cruiser, Magistrate Judge Hayes concluded that Johnson did not have a reasonable expectation of privacy, and she recommended that the Motion to Suppress be denied as to the evidence obtained from the cruiser. With regard to the desk, however, Magistrate Judge Hayes found that Johnson did have a reasonable expectation of privacy and that the warrantless search of his desk violated the Fourth Amendment and was presumptively unreasonable.

As you may know, the 4th Amendment creates a right to be free from “unreasonable” searches and seizures.  As Wikipedia notes, and as I’ve explained in prior posts, a 4th Amendment “search” violates a “reasonable expectation of privacy” in a place or a thing, such as a desk or a vehicle.  To have such an expectation of privacy, you must, as I’ve noted in earlier posts, both subjectively believe the place or thing is private and society must accept your belief as objectively reasonable.  If you’d like to read more out that, check out this post.

The prosecution objected to part of the Magistrate’s Report and Recommendation, i.e., it argued that the District Court judge should not follow her recommendations.  U.S. v. Johnson, supra.  The government argued that she erred in finding that the motion should be granted with regard to the search of Johnson’s desk.  U.S. v. Johnson, supra.  As the opinion notes, the

Government objects that the Court should deny the Motion to Suppress in its entirety because the search of Johnson's desk was a legitimate workplace search and, in the alternative, the evidence would have been inevitably discovered.

In making this argument, the prosecution relied on the “workplace exception” established in the Supreme Court’s decision in O’Connor v. Ortega, 480 U.S. 709(1987).  In Ortega, the Court held that “[s]earches and seizures by government employers or supervisors of the private property of their employees . . . are subject to the restraints of the 4th Amendment.”  In other words, this meant that Johnson – like other employees – could have a 4th Amendment expectation of privacy in his office and his desk.

The Ortega Court distinguished between “areas and items that are related to work” and are “within the employer’s control” and personal possessions, such as bags, employees bring to the workplace. O’Connor v. Ortega, supra. It noted that while the employee’s 4th Amendment expectation of privacy in “the existence and the outward appearance of the luggage is affected by its presence in the workplace, the employee's expectation of privacy in the contents of the luggage is not affected in the same way.”  O’Connor v. Ortega, supra.  In other words, the fact that you bring a laptop bag to work is not “private” for the purposes of the 4th Amendment, but the contents of the bag can be, so officers would need a warrant (or an exception to the warrant requirement) to search the bag.

The Ortega Court also held that while employer searches of property in which employees have a 4th Amendment expectation of privacy is a “search,” and while this means the search must be “reasonable,” it does not mean that employers must obtain a search warrant when they investigate an employee for “work-related” reasons. O’Connor v. Ortega, supra.  As the Court noted, “[w]e must balance the invasion of the employees' legitimate expectations of privacy against the government's need for supervision, control, and the efficient operation of the workplace.”  O’Connor v. Ortega, supra.

That is the workplace exception the government relied on. It cited a series of federal cases that have applied O’Connor v. Ortega to workplace searches intended to locate evidence of employee misconduct that could also be criminal, such as viewing child pornography on an officer computer.  U.S. v. Johnson, supra.  One Court of Appeals, for example, found that “O'Connor's goal of ensuring an efficient workplace should not be frustrated simply because the same misconduct that violates a government employer's policy also happens to be illegal.” U.S. v. Slanina, 283 F.3d 670 (U.S. Court of Appeals for the 5th Circuit 2002).

This court, like other federal courts, focused on the purpose of the investigation, so as long as it has the “dual nature” of seeking evidence of workplace misconduct and of criminal activity, the employer and/or the employer’s agents will not be required to obtain a search warrant.  U.S. v. Slanina, supra.  It, like other courts, found that to require employers to obtain a warrant in this situation would “frustrate the government employer’s interest in the” efficient operation of the workplace.  U.S. v. Slanina, supra.

So the prosecution argued, in the Johnson case, that under this principle, Roark and Chesser were not required to obtain a warrant to search Johnson’s office and desk.  U.S. v. Johnson, supra.  The District Court judge did not agree.  He explained that

He based that conclusion on the fact that, as noted above, at the time of the search Johnson had been the focus of a criminal investigation for six months.  U.S. v. Johnson, supra.  He therefore found that the Ortega workplace exception did not apply and that the Magistrate Judge correctly found that the evidence found by searching Johnson’s desk should be excluded as having been obtained in violation of the 4th Amendment.  U.S. v. Johnson, supra.

The prosecution then claimed the evidence was admissible under the inevitable discovery exception.  U.S. v. Johnson, supra.  As Wikipedia notes, this is a principle in U.S. law under which “evidence obtained in violation of the defendant's constitutional rights is admissible in court if it can be established, by a preponderance of the evidence, that normal police investigation would have inevitably led to the discovery of the evidence.”  The exception applies if

`the Government demonstrates by a preponderance of the evidence that (1) there is a reasonable probability that the contested evidence would have been discovered by lawful means in the absence of police misconduct and (2) the Government was actively pursuing a substantial alternate line of investigation at the time of the constitutional violation.’

Here, the prosecution argued that Johnson

had been placed on leave pending the outcome of the investigation and that Johnson's supervisor had instructed Sergeant Roark to retrieve the MPD's laptop from Johnson's desk. Therefore, the Government contends that the bank statements and debit card would have been inevitably discovered by either Sergeant Roark and Agent Chesser or by another MPD employee designated to clean out Johnson's desk.

The judge again did not agree.  He noted, first, that he had

just held that Sergeant Roark and Agent Chesser did not have the authority, absent a search warrant, to search Johnson's desk. Thus, this argument carries no weight.

He also found that the prosecution had “failed to establish by a preponderance of the evidence that there was a reasonable probability the contested items would have been discovered by lawful means.”  U.S. v. Johnson, supra.

The Court has reviewed the record in this matter, but the only testimony addressing this argument indicates that Johnson's laptop computer was located in his office at Carroll Junior High School and that it was a 14–inch screen IBM laptop which could fit in a drawer. Neither Sergeant Roark nor Agent Chesser testified as to where the computer was located or where the debit card and bank statements were found.