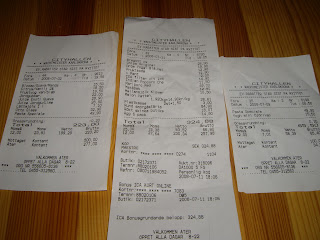 The case arose from something Wells (allegedly) did on October 30, 2010, while she

was working as a sales associate/cashier at Macy's in the children's department. On that day she gave unauthorized discounts to a customer and permitted that customer to take other items without paying for them.

At Wells’ trial, Robert Street, the loss prevention officer for Macy's, testified that he viewed the store surveillance tape for that day and observed the following:

A couple of minutes later the customer's transaction was complete. The customer walks away with three large bags.

The opinion also explains that Macy’s computer records showed that

When Street “confronted” Wells with the facts outlined above, she

admitted making the markdowns. She said the customer, whom she claimed to know only from the store, `always asked for discounts and asked for items for free.’ [Wells] told Street that `she gives in easy, that she is easily manipulated and that she changed the prices for the customer.’

If any person wrongfully and fraudulently use, dispose of, conceal or embezzle any money, bill, note, check, . . . or any other personal property, tangible or intangible, which he shall have received for another or for his employer, . .  or by virtue of his office, trust, or employment, or which shall have been entrusted or delivered to him by another or by any court, corporation or company, he shall be guilty of embezzlement.

In other words, it is their job to sort through disputed accounts presented in evidence. The judge decides questions of law, meaning he or she decides how the law applies to a given set of facts. The jury instructions provide something of a flow chart on what verdict jurors should deliver based on what they determine to be true. . . .

there was no evidence showing any pecuniary benefit to [Wells], but opined that such benefit is not mandated by the law. The Commonwealth, the trial court concluded, must prove benefit to the defendant or benefit to another.

He therefore instructed the jury (in Instruction No. 4ii) that

The defendant is charged with the crime of embezzlement. The Commonwealth must prove beyond a reasonable doubt each of the following elements of that crime:

1. That the defendant wrongfully and fraudulently converted to the use of another or disposed of, property, with the intent to permanently deprive the rightful owner thereof; and

2. That the property had been received by the defendant by virtue of her employment, office, or trust for her employer; and

The trial judge refused to give this instruction, which was proposed by Wells:

He did give this instruction, which was also proposed by Wells:  “A fraudulent or dishonest act is one which involves bad faith, breach of honesty, a want of integrity or moral turpitude.”  Wells v. Commonwealth, supra.

The Court of Appeals did not buy her first argument, for two reasons.  Wells v. Commonwealth, supra.  The first reason was that the

plain language of the statute does not require the employee to personally benefit in order to be guilty of embezzlement. Proof of the `[u]nauthorized and wrongful exercise of dominion and control over another's personal property, to [the] exclusion of or inconsistent with [the] rights of the owner,’ is sufficient to prove embezzlement. Evans & Smith v. Commonwealth, 226 Va. 292, 308 S.E.2d 126 (1983).

As to the second reason, the Court of Appeals initially noted that “at trial, [Wells] did not object to Commonwealth's Instruction No. 4ii which stated, in part, that the prosecution must prove that `the defendant wrongfully and fraudulently converted . . . to the use of another. . . .’”  Wells v. Commonwealth, supra.

It then explained that the Virginia Supreme Court

Thus, [Wells] is bound by Instruction No. 4ii, i.e., that the Commonwealth need not prove appellant personally benefitted from the misappropriation.

Wells v. Commonwealth, supra.  In other words, Wells waived her right to raise the issue by not objecting to the instruction at the time the trial judge was considering it.

The court then took up her second argument, which was that “there was no evidence of fraudulent intent because her only intent was to accommodate the customer and that she was authorized to mark down items.”  Wells v. Commonwealth, supra.  It noted that

two reasons. First, it ignores [her] statement to Street, the store's loss prevention officer, that she was stealing and she knew it was wrong. She said she thought she could get away with it. Second, [Wells] told Street that if a customer wanted a price reduction, `I would call a manager.’ During the transaction which is the subject of this appeal, she did not call a manager. Further, Street testified that a sales associate, in order to mark down a sale price, must get permission from a manager, except in limited circumstances not applicable here. Furthermore, in addition to these unauthorized markdowns, [Wells] also gave away other shirts to the customer.

the evidence proved more than that [Wells] simply misappropriated Macy's property. [She] admitted to stealing her employer's property. Further, there was evidence that [her] acts were unauthorized.

here are a couple of articles that you might want to talk about. I realize that one of them is 2 yrs old, but it is quite a case and I have never heard of the ACLU being able to do something like that.

what does this case have to do with cybercrime?

(i) the override on the computer/register;
(ii) the crashed hard drive on the digital recorder;
(iii) the doctrinal proposition that manipulating digital devices to appropriate property for someone constitutes embezzlement.