The License, the Citation and the Computer 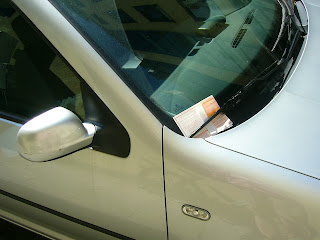 This post deals with something I’m sure many, if not most, of us have encountered: a traffic ticket. Let’s start with what a traffic ticket – or, in the case we’ll be examining, a traffic citation – is, under the law:

In some jurisdictions, violations of certain traffic rules or regulations which are not misdemeanors or felonies, are denominated traffic infractions. Prosecutions for such infractions are instituted by the filing of an information or complaint or its equivalent, which frequently consists of a printed traffic ticket or similar instrument.

The case we’ll be examining arose in the state of Washington, which uses traffic citations for the purpose noted above. A Washington statute states that when any

person is arrested for any violation of the traffic laws . . .which is punishable as a misdemeanor or by imposition of a fine, the arresting officer may serve upon him or her a traffic citation and notice to appear in court. Such citation and notice shall conform to the requirements of [Washington Revised Code § 46.64.010] and . . . shall include spaces for the name and address of the person arrested, the license number of the vehicle involved, the driver's license number of such person, if any, the offense or violation charged, and the time and place where such person shall appear in court. Such spaces shall be filled with the appropriate information by the arresting officer.

Washington Revised Code § 46.64.010, cited above, says “[e]very traffic enforcement agency” in the state must “provide in appropriate form traffic citations containing notices to appear which shall be issued in books. . . or issued by an electronic device capable of producing a printed copy and electronic copies of the citations.” Washington Revised Code § 46.64.010(1). The next section of this statute says that a “traffic enforcement officer” who issues a traffic citation to an

alleged violator of any provision of the motor vehicle laws of this state or of any traffic ordinance of any city or town shall deposit the original or a printed or electronic copy of such traffic citation with a court having . . . jurisdiction over the alleged offense or with its traffic violations bureau. . . . [T]he original or copy of such traffic citation may be disposed of only by trial in the court or other official action by a judge of the court. . . .

driving with an expired vehicle license. He provided a Washington identification card. Upon discovering that Taylor had been deemed an habitual traffic offender, the officer issued a criminal citation requiring Mr. Taylor to appear in the Spokane Municipal Court. The front of the citation lists the code violation as `[Revised Code of Washington] 46.20.342.1A.’

When the clerk of the court with which the citation was filed received it, he/she entered

the offense on the computer as third degree driving while license suspended. Arraignment was scheduled for March 6, 2009. A public defender appeared on behalf of Taylor. The city attorney responsible for the calendar notified the public defender by e-mail that the City of Spokane (City) would be amending the charge to first degree driving while license suspended (DWLS 1).

Taylor tried to avoid the greater charge. At his arraignment, he asked to enter a

guilty plea to DWLS 3 and his counsel presented a completed statement of [Taylor’s] on plea of guilty. The city attorney asked to amend the charge to DWLS 1. The court heard argument and ruled that a charge of DWLS 3 had been filed. The court denied the motion to amend, accepted the guilty plea, and imposed sentence.

Taylor claimed the state Supreme Court’s decision in Martin plus Washington Revised Code § 10.04.070, which says a “defendant may plead guilty to any offense charged” gave him an “absolute right to plead guilty at arraignment, thus outweighing any competing effort to amend the charging document.” City of Spokane v. Taylor, supra. Unfortunately for Taylor, the Court of Appeals did not buy his argument.

Instead, it “agree[d] with the superior court” that the trial court erred in “accepting the guilty plea rather than permit[ting] the amendment.” City of Spokane v. Taylor, supra.

The basis for the error is found in [Washington Revised Code § 10.04.979] which permits a guilty plea `to any offense charged.’ Taylor assumes that he was charged with DWLS 3 because the court clerk listed that offense in the computer. However, a listing in a computer record is not the same as a charging document stating an offense.

statutory authority for DWLS 1 and identified the factual basis for that offense in the probable cause statement provided on the back of the ticket, which also stated the offense as DWLS 1. Taylor relies solely on the front page reference to DWLS 3 to claim that he was actually charged with that offense. The court rules require more.

[State Criminal Rule for superior courts] 2.1(b) addresses the requirements for criminal citations. In addition to other . . . information, the citation must include the `numerical code section’ and a `description of the offense charged.’ . . . The officer must also certify there is probable cause to believe `the person committed the offense charged.’

However, we are quite confident that the citation was not sufficient to charge DWLS 3. In light of the citation's defects, it was error to accept the guilty plea to an uncharged offense. The combination of the error in the description and the clerk's error in entering DWLS 3 into the computer did not constitute a charge of DWLS 3.

The Court of Appeals therefore affirmed the superior court’s order holding that the “plea to the uncharged offense was invalid” and remanded the case to the lower court for further proceedings. City of Spokane v. Taylor, supra.

You might be wondering why Taylor couldn’t argue that the 5th Amendment’s prohibition on double jeopardy would be violated if he were prosecuted for DWLS 1 after having been charged with DWLS 3. As this site notes, double jeopardy attaches in a jury trial when the jurors are sworn in and attaches in a bench trial when the first witness is sworn. Since none of that happened here, the protection against double jeopardy presumably didn’t attach, but that’s not the real problem Taylor would face in trying to raise this issue.

As the Washington Court of Appeals noted in State v. Tresenriter, 101 Wash. App. 486, 4 P.3d 145 (2000), “conviction of a crime not charged is a nullity and a defendant so convicted has never been in jeopardy.” So even if we assume Taylor was somehow “convicted” of DWLS 3, the fact that he was never actually charged with that crime means he was never in “jeopardy.”