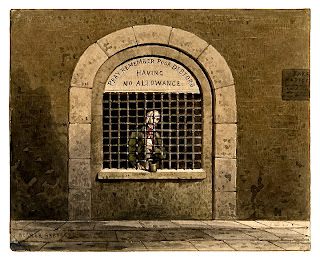 I know pretty much nothing about bankruptcy law, which doesn’t matter because while a bankruptcy court issued the opinion this post examines, the issues involved really go to issues of electronic privacy in the United States.

This is how the bankruptcy judge described what this case was all about:

According to this opinion, the German bankruptcy proceeding, which I’m guessing was involuntary, was filed in Munich and “Toft refused to cooperate . . . and has . . . secreted his assets and relocated to an unknown country outside of Europe”. In re Toft, supra. On July 8, 2010, “in accordance with what is alleged to be common German practice, the German Court entered a `Mail Interception Order’ authorizing Prager . . . to intercept Toft's postal and electronic mail.” In re Toft, supra. When Prager heard Toft might be in England, he “initiated a proceeding” before the English High Court of Justice, which issued “an ex parte order” earlier this year that “granted recognition and enforcement to the German Interception Order.” In re Toft, supra.

As you’ve probably guessed, Prager wanted to do the same thing in this country, which is why he initiated this bankruptcy proceeding. He filed a motion with this court that

request[ed] ex parte relief in accordance with what is said to be German (and English) practice. No notice was provided to the Debtor, and it is requested no notice be required if relief is granted so [Prager] can continue to investigate the affairs of a debtor whose intransigence, obstructionism, and evasive tactics have allegedly thwarted the German insolvency proceeding. Prager requests that the Court recognize and `grant comity’ to the orders of the German and English Courts and enter an order enforcing the Mail Interception Order in the United States by compelling the ISPs, AOL, Inc. and 1 & 1 Mail & Media, Inc., to disclose to Prager all of [Toft’s] e-mails currently stored on their servers and to deliver to Prager copies of all e-mails received by [Toft] in the future.

The judge noted that there was “no question that German and English insolvency proceedings are ordinarily entitled to recognition in this country,” but that this wasn’t just a bankruptcy issue: “[T]hrough this proceeding, Prager seeks . . . the undisclosed production of past e-mails as well as what can only be described as a wiretap of Toft's future e-mail correspondence.” In re Toft, supra. He also noted, before proceeding to analyze the issues in detail, that a “bankruptcy trustee would not be entitled to such relief under United States law, and a chapter 15 proceeding cannot ordinarily be pursued without notice to the debtor.” In re Toft, supra.

The judge began his analysis of the issues in the case by noting that Chapter 15 of the U.S. Bankruptcy Code “provides a comprehensive scheme for recognizing and giving effect to foreign insolvency proceedings” and therefore allows a U.S. bankruptcy court to provide various types of assistance to the foreign representative of such a proceeding. In re Toft, supra. He also noted that § 1507 of Chapter 15 – 11 U.S. Code § 1507 – allows a bankruptcy court to grant “`additional assistance’” under the Bankruptcy Code or “`other laws of the United States’” if “such assistance is consistent with the principles of comity.” In re Toft, supra. As Wikipedia notes, comity refers to the principle that “one jurisdiction will extend certain courtesies to other nations . . . by recognizing the effect of their executive, legislative, and judicial acts.”

The bankruptcy judge also noted, though, that “[n]otwithstanding the direction that a U.S. court grant comity . . . to a recognized foreign representative in insolvency matters, it is also beyond question that, `. . . comity has never meant categorical deference to foreign proceedings.’” In re Toft, supra (quoting In re Treco, 240 F.3d 248 (U.S. Court of Appeals for the 2d Circuit 2001)). Section 1506 of Chapter 15 gives a bankruptcy judge “authority to deny the relief requested where such relief would be `manifestly contrary to the public policy of the United States.’” In re Toft, supra (quoting 11 U.S. Code § 1506).

Prager claimed recognizing “the German Mail Interception Order would not be contrary to U.S. public policy.” In re Toft, supra. But the judge explained that Prager could not

cause this Court to apply the laws of Germany -- or England -- in proceedings in this country simply by making an impassioned appeal to comity. For one thing, foreign procedures are not routinely imported into U.S. law. . . . [C]ourts have a compelling interest in applying the procedural rules of the forum regarding how proceedings are conducted. . . . The sweeping relief requested by the Foreign Representative is not incorporated into U.S. law merely because of the principle of comity and because it is available in his home jurisdiction.

The judge reviewed the “few reported cases” that had analyzed § 1506’s exception for circumstances in which providing assistance would “manifestly” contravene the public policy of the United States and found those courts had read the exception “narrowly and applied it sparingly”. In re Toft, supra. He found that this was “one of the rare cases that calls for” applying the exception:

[A]ny ex parte . . . enforcement of the Mail Interception Order would directly contravene the U.S. laws and public policies analyzed herein. . . . The public policy issue must be squarely faced with respect to [the fact that] German procedures be given effect in this country regardless of the fact that they exceed traditional limits on the powers of a trustee in bankruptcy under U.S. law and constitute relief that is banned by statute in this country and might subject those who carried it out to criminal prosecution.

The judge explained, first, that enforcing the German order would violate the Electronic Communication Privacy Act, under which a warrant issues as part of a criminal

investigation upon a heightened showing of necessity is required in order to conduct a wiretap lawfully without the consent of one of the parties to the communication. 18 U.S. Code § 2518. Courts that have applied the provisions of the . . . Act to e-mails have held that the clandestine interception of e-mails of an individual, occurring contemporaneously with delivery, constitutes an illegal wiretap. . . . The Foreign Representative argues that the inspection of e-mails is not a wiretap because the e-mails are inspected after their delivery and not while in transit, but no authority has been provided to support this narrow construction of the . . . Act.

which is intended to prevent third parties from `obtaining, altering, or destroying certain stored electronic communications,’ imposes criminal and civil penalties when a person `accesses an electronic communication service, or obtains an electronic communication while it is still in storage, without authorization.’ (quoting Pure Power Boot Camp v. Warrior Fitness Boot Camp, 587 F. Supp.2d 548 (S.D.N.Y. 2008). The contents of e-mail communications may be released by an ISP only under the specifically enumerated exceptions found in . . the . . . Act. Those exceptions require a search warrant issued under the Federal Rules of Criminal Procedure or a subpoena issued in the course of a criminal investigation. . . .

The judge noted that the U.S. Court of Appeals for the 6th Circuit held, in U.S. v. Warshak, 631 F.3d 266 (2010), that the 4th Amendment also protects stored emails from warrantless searches, but he did not analyze that issue because “it is unclear whether the Debtor, a foreign national not located in the United States, would be entitled to claim the protections of the Fourth Amendment.” In re Toft, supra. He also pointed out that the Stored Communications Act “has been held to apply irrespective of the foreign nationality of the account holder.” In re Toft, supra.

Finally, he noted that the “fact that U.S. law differs from German law with respect to the disclosure of e-mail communications does by itself not mean that the relief sought by the Foreign Representative is manifestly contrary to U.S. public policy”.” In re Toft, supra. But he also explained that in this case, the assistance sought by Prager

is banned under U.S. law, and it would seemingly result in criminal liability under the Wiretap Act and the Privacy Act for those who carried it out. The relief sought would directly compromise privacy rights subject to a comprehensive scheme of statutory protection, available to aliens, built on constitutional safeguards incorporated in the Fourth Amendment as well as the constitutions of many States. Such relief `would impinge severely a U.S. constitutional or statutory right.’

He therefore denied Prager’s motion for ex parte assistance from the bankruptcy court. In re Toft, supra.