The Juror Who Facebooked and Tweeted During Trial 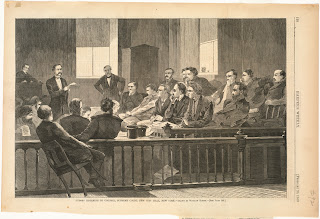 If you’d like to read more about that, you can check out this chapter on juror misconduct from a publication from the University of North Carolina’s School of Government.

This post examines an allegation of juror misconduct that “former Pennsylvania State Senator Vincent J. Fumo” raised in appealing his conviction on “on 137 counts of fraud, tax evasion, and obstruction of justice.” U.S. v. Fumo, 2011 WL 3672774 (U.S. Court of Appeals for the 3d Circuit 2011). I’m not going to describe the facts that led to his being charged with, and convicted of, these crimes, but this Wikipedia entry tells you about Fumo and about how the convictions came about.

Our concern is with the alleged juror misconduct. The trial was held in 2009, and on

March 15, 2009, while jury deliberations were ongoing, a local television station reported that one of the jurors, hereinafter referred to as `Juror 1,’ had made postings on both his Facebook and Twitter pages related to the trial. That night, which was the night before the jury returned its verdict, Juror 1 was watching television when he learned that the media was following the comments he had made on the internet. He subsequently panicked and deleted the comments from his Facebook page.

The opinion explains that “[p]rior to deleting” the comments noted above, Juror 1

made the following comments on his Facebook `wall’ during jury selection and the trial:

— Mar. 9: (end of second day of deliberations): `[Juror 1] says today was much better than expected and tomorrow looks promising too!’

— Mar. 13: (Friday after completion of first week of deliberations): `Stay tuned for the big announcement on Monday everyone!’

The opinion also notes that

Juror 1's Facebook comments appeared over the many months of the trial, and in the midst of dozens of other comments he made unrelated to the trial. It was the final, March 13 post that was the subject of media attention. With regard to Twitter, Juror 1 made a single comment or `tweet’ on March 13, stating `This is it . . . no looking back now!’

When Fumo heard about Juror 1’s Facebook comments and the tweets (the opinion refers to “Twitter comments”), he moved to disqualify Juror 1

from the jury. The District Court held an in camera review . . . and questioned Juror 1 about his activities on these two websites and his general media consumption. Juror 1 told the judge he saw the news report that night because he had been watching another show when the local news began. He nevertheless explained that he had avoided television news during the entire trial. He also affirmed that he had not discussed the substance of the case with anyone. Juror 1 further stated that he had made the comments `for my benefit to just get it out of my head, similar to a blog.’

The district court judge subsequently an written opinion in which he found that “there was no evidence Juror 1 received outside influence due to his Facebook or Twitter postings” and concluded that although they violated “his instruction not to discuss the case outside of the jury room, they were `nothing more than harmless ramblings having no prejudicial effect. They were so vague as to be virtually meaningless.’ U.S. v. Fumo, supra.

“More than three months after the” jury returned its verdict but before Fumo was sentenced, journalist

Ralph Cipriano, writing for Philadelphia Magazine, had contacted [Fumo’s lawyer] regarding information he obtained during post-verdict interviews with several jurors. According to an article written by Cipriano, on the morning of March 16, the day of the verdict, all of the jurors had heard media reports about Juror 1's use of Facebook and Twitter.

public attention to the jury's deliberations, creating a `cloud of intense and widespread media coverage . . . and [the] public expectation that a verdict [wa]s imminent[,]’ thereby violating his Sixth Amendment right to a fair and impartial trial. . . . Fumo also argues that the fact that Juror 1 watched the evening news, in which his own internet comments were discussed, implies or suggests that he may have been compromised by bias or partiality.

In addressing this argument, the Court of Appeals noted that a juror who comments

about a case on the internet or social media may engender responses that include extraneous information about the case, or attempts to exercise persuasion and influence. If anything, the risk of such prejudicial communication may be greater when a juror comments on a blog or social media website than when she has a discussion about the case in person, given that the universe of individuals who are able to see and respond to a comment on Facebook or a blog is significantly larger.

It also explained, though, that while the “recommended practice” is to prohibit and admonish jurors about using social networking, “it does not follow that every failure of a juror to abide by that prohibition will result in a new trial.” U.S. v. Fumo, supra. The court explained that here, “as with other claims of juror partiality and exposure to extraneous information, courts must look to determine if the defendant was substantially prejudiced.” U.S. v. Fumo, supra.

And it found that Fumo was not “substantially prejudiced” by Juror 1’s comments:

[N]one of Fumo's theories of bias or partiality is plausible, let alone sufficient for us to find that the District Court abused its discretion in denying his motion for a new trial. The District Court questioned Juror 1 in camera at length about . . . his comments online. . . . The Court found no evidence that Juror 1 had been contacted regarding the posts. . . .

The Court also concluded that the posts on Facebook were `so opaque there was no possible way that members of [Facebook's] Philadelphia network could read them and have any obvious understanding of his discussion.’ It described the posts as `nothing more than harmless ramblings having no prejudicial effect. They were so vague as to be virtually meaningless. [Juror 1] raised no specific facts dealing with the trial, and nothing in these comments indicated any disposition toward anyone involved in the suit.’

We largely agree with these characterizations of the comments. Finally, the District Court found that despite violating its prohibition against discussing the details of the trial, `[Juror 1] was a trustworthy juror who was very conscientious of his duties. There was no evidence presented by either party showing that his extra-jury misconduct had a prejudicial impact on the Defendants.’

The Court of Appeals found that, “in light of these findings, which were based in large part on Juror 1’s in-person testimony”, there was

simply no plausible theory for how Fumo suffered any prejudice, let alone substantial prejudice, from Juror 1's Facebook and Twitter comments. Nor does Fumo provide a plausible theory for how the fact that other jurors may have learned of Juror 1's `vague’ and `virtually meaningless’ comments on Facebook could have led to substantial prejudice against him. Accordingly, the District Court did not abuse its discretion when it denied Fumo's motion for a new trial on this basis.