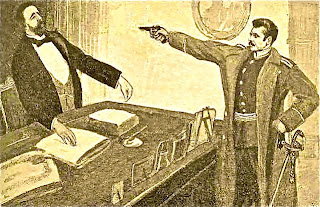 Section 1958(a) of Title 18 of the U.S. Code makes it a federal crime, essentially, to use interstate commerce in “the commission of murder-for hire.” Specifically, the statute provides as follows:

As the U.S. Department of Justice’s Criminal Resource Manual notes, the statute was adopted in 1984, to give the federal government jurisdiction to prosecute someone who’s involved in a murder for hire scheme. Section 1958(a) doesn’t create a murder crime; it merely makes it a crime to travel in or use interstate commerce as part of a scheme involving contract killing.

Mandel and Kostantinos “Gus” Antoniou each owned half of G&D Excavating Company; the two fell out due to disagreements “over the company’s finances and equipment,” and by April 2008 they “were in litigation over the company’s property” and by the following October Antoniou had locked “Mandel out of the company’s premises.” U.S. v. Mandel, supra. In late August of 2008, Chicago police and local FBI officers heard from Patrick Dwyer, “a trusted friend and employee of the business,” that Mandel “had discussed the possibility of hiring someone to murder Antoniou.” U.S. v. Mandel, supra.

According to Dwyer, Mandel told him “he knew an unidentified individual who wanted Antoniou killed” and asked Dwyer “to find a hit man and determine how much it would cost.” U.S. v. Mandel, supra. Mandel “reportedly offered” to provide the gun, “if needed.” U.S. v. Mandel, supra. Dwyer agreed to help law enforcement investigate Mandel’s murder for hire scheme, and “proceeded to engage Mandel in a number of covertly recorded conversations, both in person and on the telephone,” in which they “laid out plans to commit Antoniou’s murder.” U.S. v. Mandel, supra.

I think you get the idea: Conversations like these, in which Mandel used his cell phone, were the basis for some of the charges against him. On November 25, Mandel and Dwyer drove past Antoniou’s house and speculated about when Antoniou would be returning to his home from visiting his mother for Thanksgiving. U.S. v. Mandel, supra. To find out, Mandel called “a third party on his cell phone” and that call was the basis for yet another of the charges. U.S. v. Mandel, supra.

At trial, Mandel took the stand and basically denied ever having been involved in a plot to hire a hit man to kill Antoniou. U.S. v. Mandel, supra. On appeal, he challenges his conviction on three of the § 1958(a) counts that were based on his using his cell phone

As Wikipedia explains, entrapment is a defense to criminal charges that is based on a

law enforcement agent inducing a person to commit an offense that the person would otherwise have been unlikely to commit. . . . [T]here is no entrapment where a person is ready and willing to break the law and the government agents merely provide what appears to be a favorable opportunity for the person to commit the crime. . . .

Mandel is using entrapment in an interesting way: He’s not claiming the government entrapped him into participating in the murder for hire scheme; he’s arguing that it entrapped him into using his cell phone which gave the federal government jurisdiction to prosecute what would otherwise have been an Illinois case. U.S. v. Mandel, supra.

The 7th Circuit found that the evidence “was more than sufficient” to negate Mandel’s claim that he was entrapped into using his cell phone in furtherance of the murder plot:

Dwyer . . . simply provided Mandel with an opportunity to commit a criminal act that Mandel accepted. . . Mandel posits he would not have discussed the murder scheme on a cell phone but for Dwyer taking the initiative in contacting him on his cell, but the evidence suggests otherwise. First, the cell phone was Mandel's own phone, and although use of such telephones was rare thirty years ago, it is commonplace today. . . .

Second, Mandel took Dwyer's calls . . . and readily discussed the scheme . . . without any apparent reluctance or hesitation. Third, Mandel was not simply a passive recipient of the calls. The call underlying Count Five is one Mandel himself placed to someone other than Dwyer to determine when . . . Antoniou would be returning to his usual abode, so an appropriate date for the hit could be determined. Mandel's self-initiated use of his cell phone in that instance puts the lie to the notion that he would not have used the phone in furtherance of the scheme but for Dwyer's prompting.

Finally, to the extent that Dwyer's calls to Mandel's cell phone could be characterized as inducement to use that phone to discuss the scheme, they were hardly the sort of extraordinary inducement that is necessary to show entrapment.

The court therefore rejected Mandel’s argument that “the government improperly `manufactured jurisdiction’ over his conduct by having Dwyer initiate calls to Mandel's cell phone in order to ensure Mandel's use of a facility of interstate commerce and thus to establish a key element of the federal offense.” U.S. v. Mandel, supra. In support of his argument, Mandel relied on a case from the 2d Circuit Court of Appeals, in which that court threw out a Travel Act charge because a federal agent “crossed state lines to place a telephone call to one of the defendants . . . `for the precise purpose of transforming a local bribery offense into a federal crime.’” U.S. v. Mandel, supra (quoting U.S. v. Archer, 486 F.2d 670 (2d Cir. 1973)).

To embrace Archer's broad proscription against manufactured jurisdiction. We have been skeptical of the contention that the government `manufactures’ jurisdiction simply because its agent invites the defendant to take some action in or affecting interstate commerce and the defendant accepts that invitation.

According to the news story you can find here, Mandel was going to get the hit man’s gun “from the Ku Klux Klan in Indiana”.