Miranda, Interrogation and the Computer Glitch 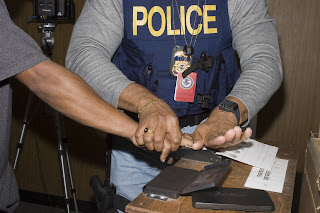 This post isn’t about a cybercrime case, per se. It is about a case that involves the intersection of criminal law (actually, of criminal procedure law) and technology . . . in a rather unusual way.

We’re not concerned with either the charge or the resulting conviction, as such. We’re going to be examining a procedural issue, but to put that issue into context I need to note how Dixon came to be charged with murder:

The victim's body was found [underneath his whellchair] at . . . 9:30 P.M. [on June 29, 2004] on a landing between the third and fourth floors of a stairwell [in the Ship’s Cove apartment building]. The victim. . . . sustained blunt trauma to his head and neck and died as a result of those injuries. The victim and [Dixon] lived on the fourth floor. . . . Ship's Cove was equipped with security cameras which recorded the following events. . . .

Shortly thereafter, [Dixon’s] next door neighbor, Maria Carreiro, heard a man scream . . . `No, no, please, no, no.’ The voice was coming through the wall adjacent to [Dixon’s] apartment. Carreiro called the police. She then observed the wall near her front door shaking, and heard the door to [Dixon’s] apartment open. Next, she heard the door to the (stairwell) open and `[s]omething rolling down the stairs. . . .

At 9:38 P.M., two Fall River police officers arrived . . . as [Dixon] and Marrero were leaving. . . . After the police discovered the victim's body, they secured the scene and obtained a search warrant for [Dixon’s] apartment. During the execution of the warrant, police observed blood stains on the wall which separated [his] apartment from Carreiro's. . . . [P]olice also observed blood in the stairwell where the body was found. [DNA] testing revealed that the blood in [Dixon’s] apartment and the stairwell matched the victim's DNA profile. . . .

Officers also discovered other evidence that directly or inferentially linked Dixon and Marrero to the victim’s death. Commonwealth v. Dixon, supra. Because of that, they were arrested on July 2, 2004. Commonwealth v. Dixon, supra. Dixon was initially booked “at the State police barracks in the South Boston section of Boston,” but then “transported to the Fall River police station”, where he was taken to an interview room, given his Miranda rights and signed a form indicating that

he understood those rights. [Dixon] both orally and in writing, informed the officers that he did not wish to speak to them. At that point, the formal interview ended and [Dixon] was escorted to the booking room by Fall River police Detective Chace and State police Trooper Robertson.

Fall River police use a computerized booking program. . . . [T]he booking officer [was] Officer Maher. . . [Dixon] answered a number of routine booking questions posed by Officer Maher. Throughout the booking, [he] was handcuffed and stood at arm's length from Maher across a waist-high counter. Chace was standing directly beside [Dixon], and Robertson stood five feet to [his] right. On the counter was a computer into which Maher entered the information he received from [Dixon].

The computer program presents its user with a series of requests for specific information to be entered on a number of consecutive `pages’. . . . Unless the requested information is entered into the appropriate field, the program will not allow a user to proceed to the next page or to complete the booking procedure. Where . . . the charged offense is a crime of violence, the booking program requires the booking officer to answer an inquiry whether a weapon was used. Upon reaching this prompt, Maher asked Chace, who was still standing directly to [Dixon’s] left, whether a weapon was used during the incident. Chase did not respond, but [Dixon] stated,`The dude hit us.’ Maher entered `unknown’ or `none’ into the computer and proceeded with the remainder of the booking questions.

Prior to trial, Dixon moved to suppress his comment that “The dude hit us”, claiming it was elicited in violation of his Miranda rights to silence and to counsel. Commonwealth v. Dixon, supra. As Wikipedia explains, and as I assume everyone knows, in Miranda v. Arizona, 384 U.S. 436 (1966), the Supreme Court held that a suspect who is in “custody” (e.g., has been arrested) must be told that he has the right to remain silent and the right to have counsel appointed and present if and when he decides to talk to the police. The suspect must also be told police cannot interrogate him if he invokes the right to silence or the right to counsel.

As noted above, after being Mirandized Dixon told the officers (orally and in writing) he didn’t want to talk to them, so he invoked his right to silence. That meant that the officers could not “interrogate” him, at least not unless and until a lengthy period of time had passed and they had taken certain other steps to protect his Miranda rights.

Dixon argued that when Maher asked if a weapon was used, he, Dixon, was subjected to “interrogation” in violation of his Miranda rights. If that was true, then Dixon’s statement that “the dude hit us” would have to be suppressed. The judge who ruled on the motion to suppress held that it did not have to be suppressed because it was volunteered and therefore was “not the product of custodial interrogation”. Commonwealth v. Dixon, supra.

More precisely, the judge found that the statement could be used because

(1) [it] was not responsive to Maher's question whether a weapon had been used; (2) the question was posed to Chace and not to [Dixon’; [and] (3) Maher was not `objectively’ seeking an incriminating response when he posed the question. . .

The Court of Appeals began its analysis of his argument by noting that, under the Supreme Court’s decision in Rhode Island v. Innis, 446 U.S. 291 (1980), Miranda interrogation encompasses both (i) express questioning and (ii) “any words or actions on the part of the police (other than those normally attendant to arrest and custody) that the police should know are reasonably likely to elicit an incriminating response from the suspect.” Commonwealth v. Dixon, supra (quoting Rhode Island v. Innis, supra).

The court noted that there was an express question in this case, but also noted that the prosecution pointed out that (i) the question was “posed to Chace” rather than to Dixon and/or (ii) Dixon’s statement “was not responsive to Maher’s question whether a weapon had been used.” Commonwealth v. Dixon, supra. The court accepted the lower court judge’s finding that the question was directed to Chace, and not to Dixon, but explained that “the mere fact Maher directed his question to Chace does not address the critical question under Innis, which is whether a reasonable person in the suspect's position would perceive the question, even if not directly posed to him, as interrogation.” Commonwealth v. Dixon, supra.

so perceive Maher's question. The undisputed testimony of Chace and Robertson . . . establishes that immediately prior to asking the question whether a weapon was used, Maher had been posing questions directly to [Dixon]. Moreover, at the moment Maher asked the question, [Dixon]. . . and Chace were standing directly beside one another approximately three feet away from, and both facing, Maher. These facts do not support the Commonwealth's assertion that the statement was spontaneous. Rather, they support [Dixon’s] assertion that a reasonable person would have believed a response to the question was required. . . .

In these circumstances, Officer Maher `should have known’ that posing a substantive question directly relating to the facts of the crime under investigation, both in the presence of [Dixon] and in the course of obtaining other information from him, was `reasonably likely’ to (and did) elicit an incriminating response.

Moreover, we are not persuaded that a computer `glitch’ that requires police to inquire into the specifics of the charged offense in the presence of the accused removes those questions from the constitutional analysis. The question was a direct and explicit inquiry about the crime for which [Dixon] was being booked. As such, the police conduct amounted to the functional equivalent of interrogation and a plain failure to [honor Dixon’s] invocation of his right to remain silent. Consequently, the statement should have been suppressed.

Dixon won on that issue but lost on the related, residual one: When an appellate court finds that a trial court committed error, it has to decide whether or not the error requires the granting of a new trial. As Wikipedia notes, if the error is determined to have been “harmless,” the appellate court won’t grant a new trial. As Wikipedia also notes, in the “evidentiary context, a harmless error is usually one where the evidence had no relevance to the issues to be decided by the trier of fact, evidence admitted actually helped the party seeking the reversal, or the remaining evidence was overwhelmingly against the party seeking reversal.”

Posted by Susan Brenner at 1:04 PM

Hi Susan, this isn't related to the blog post above, but I ran across a good article about how the 4th amendment should apply to computer seizures and examinations. I'd love to hear your thoughts and analysis of the article.

Sorry for the tangent, but I didn't see any way to contact you directly.