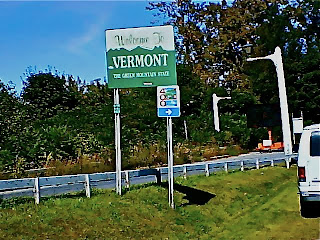 Most of the time, when I do a post that deals with a constitutional issue, the issue arose under the U.S. Constitution or one of its amendments, especially the “Bill of Rights” amendments. As I’ve noted, though, every U.S. state also has its own constitution.

How can they do that? Wikipedia’s entry on state constitutions explains that the

In 2008, two of [Graham Simmons’] neighbors on Hi Lo Biddy Road in Putney reported break-ins and stolen property, including two laptop computers. A State Police detective received a tip from an anonymous informant that a man named `Graham’” who lived on the same street as the victims, had one of the computers and was using it to access his neighbor's wireless internet network.

The detective looked through public records and learned that one Graham Simmons with previous larceny and fraud convictions lived on Hi Lo Biddy Road. The detective also learned from defendant's next door neighbor -- one of the break-in victims -- that she subscribed to Verizon internet services and had a wireless network in her home for her personal use.

The detective looked for [Simmons] on the social networking website MySpace.com and located a MySpace profile for a `Graham Simmons’ living in Putney, accompanied by a picture resembling the photograph of [Simmons] on record with the Department of Motor Vehicles. The detective then served an inquest subpoena on MySpace to obtain [Simmons’] internet protocol (IP) address -- a code identifying the computer network from which [he] accessed his MySpace account.

The records from MySpace indicated that shortly after [Simmons’] neighbor's computer was stolen, [he] logged onto his MySpace account more than 100 times over the course of a week. Each log on originated from the same IP address, identified as a Verizon internet service address.

(According to a footnote in the opinion, they’re called “inquest subpoenas” because the relevant statue says that ““[u]pon the written application of the state's attorney, a judge of the superior court may institute and conduct an inquest upon any criminal matter under investigation by the state's attorney” and “in furtherance of the inquest,” the “judge may issue necessary process to bring witnesses before [the court] to give evidence in any matter there under investigation.” 13 Vermont Statutes §§ 5131 & 5132.)

After being charged with four counts of burglary, possession of marijuana and unauthorized access to a network, Simmons moved to suppress the evidence, claiming “the IP address was private information, defendant argued that issuing subpoenas to MySpace and Verizon without probable cause was an invalid search in violation of the Fourth Amendment of the Federal Constitution and of Chapter 1, Article 11 of the Vermont Constitution.” State v. Simmons, supra. The trial court denied the Fourth Amendment part of the motion, noting that federal courts have held that Internet users have no Fourth Amendment reasonable expectation of privacy in their IP addresses or other information they voluntarily share with their ISPs. State v. Simmons, supra.

The Vermont Supreme Court doesn’t address the Fourth Amendment issue in its opinion, so either Simmons gave up on that argument or the court was satisfied with implicitly upholding what the trial judge did with it.

Simmons seems to have concentrated on his claim that the use of the inquest subpoenas to obtain IP address information violated his right to privacy under the Vermont Constitution. State v. Simmons, supra. In the opinion, the Vermont Supreme Court says he can’t raise that issue on appeal because he didn’t preserve it below . . . but then seems to go on to address it. State v. Simmons, supra.

Before I get into what the Vermont Supreme Court had to say on this issue, I want to note that Simmons’ argument is far from specious. As I explained in an earlier post, the New Jersey Supreme Court held that under the New Jersey Constitution, citizens (and residents) of New Jersey do have a constitutional expectation of privacy in IP addresses. So, the argument has worked in at least one instance.

Simmons didn’t fare as well as the New Jersey defendant who relied on that state’s constitution to argue that IP addresses are private. For one thing, aside from

a bald assertion that the evidence should be suppressed `pursuant to . . . the Vermont Constitution, Chapter 1, Article 11,’ [Simmons] proffered no particular argument or analysis to the trial court as to why this should be so. [He] correctly points out in his brief to this Court that Article 11 been found to surpass protections afforded under the Fourth Amendment to the United States Constitution; however, he advanced no reason for expanded protection at the trial court.

The court noted that Article 11 “declares that `the people have a right to hold themselves, their houses, papers, and possessions, free from search and seizure’” and “[a]bsent exigent circumstances not at issue here, . . . prohibits a warrantless search of `only those areas or activities that a reasonable person would conclude are intended to be private.’” State v. Simmons, supra (quoting State v. Geraw, 173 Vt. 350, 795 A.2d 1219 (2001)). The Supreme Court explained that under Article 11, “`the question of whether an individual has a legitimate expectation of privacy hinges on the essence of underlying constitutional values-including respect for both private, subjective expectations and public norms.’” State v. Simmons, supra (quoting State v. Bryant, 183 Vt. 344, 950 A.2d 467 (2008)).

The court also noted that to invoke Article 11 protection, a person must exhibit an actual subjective expectation of privacy that society is prepared to recognize as reasonable. State v. Simmons, supra. If you’ve read many of my Fourth Amendment posts or are otherwise familiar with Fourth Amendment law, you’ll know that this latter requirement tracks the Fourth Amendment’s requirement for defining when a “search” occurs.

The Vermont Supreme Court explained that given the

necessary and willing exposure of an internet user's access point identification and frequency of use to third party internet service providers, such information cannot reasonably be considered confidential, especially when a provider such as MySpace openly declares a policy of disclosure. The information appears no more private than a phone number and the number of calls made, or a street address or post office box and volume of mail, neither of which could plausibly be considered private.

The court then reiterated what it had said before, i.e., that while Article 11 can

afford greater protection against warrantless searches than is sometimes accorded by the Fourth Amendment, [Simmons] presents no compelling reason to depart from federal case law as applied by the trial court in this instance. No `intimate details’ of [his] personal `activities, behavior, habits, and lifestyles’ were shown to be at stake as in State v. Morris, where Article 11 protection was extended to closed trash bags that would have been subject to warrantless search under the Fourth Amendment. 165 Vt. 111, 680 A.2d 90 (1996). . . . [Simmons’] analogies to a warrantless search of his home or mail are also unavailing. Such intrusions are incomparable to requesting and receiving, from a third party service provider, an IP address and the number of times the access was used.

I don’t know that the argument Simmons rather half-heartedly tried to make could have succeeded if more effort had been put into it . . . or that it should succeed. But it is always a little aggravating to find a significant appellate court called upon to address an issue that hasn’t been adequately briefed . . . seems such a lost opportunity (even if it’s just an opportunity to clarify precisely why something isn’t protected.)

Posted by Susan Brenner at 1:15 PM