The Hard Drive and the Stolen Car 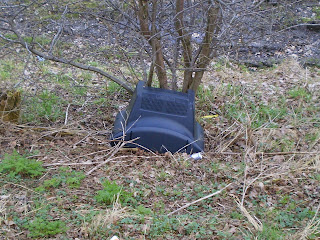 This post is about a federal case in which a defendant moved to suppress certain evidence as having been seized in violation of his rights under the 4th Amendment. As I’ve explained in earlier posts, the 4th Amendment protects us from “unreasonable” searches and seizures.

This post deals with a case in which a defendant claimed he had a reasonable expectation of privacy in a laptop computer seized from a car that had been impounded by the local police department. U.S. v. Soto, __ F.Supp.2d __, 2011 WL 1557878 (U.S. District Court for the District of Massachusetts 2011).

The case seems to have begun on April 28, 2006, when a federal-state task force

The officers searched the home and seized evidence, including a desktop computer; a federal judge later found that the officers didn’t have reason to believe Stephen lived at 56 Lawrence Road or would be there, which meant that the warrant for his arrest didn’t justify the officers’ entry into the home. U.S. v. Soto, supra. The next step in the case came in February, 2007, when Secret Service Agent Everett

received a fraud alert from Eastern Bank informing him Steven Soto had opened a checking account for a company called Aggressive Construction, identifying himself as its owner, `Gregory E. Bradley.’ . . . [T]he real Bradley was incarcerated at the Essex County House of Correction. Later that day, Steven was arrested by Saugus police at a branch of Eastern Bank where he was attempting to cash a fraudulent check for $5,700 made out to Bradley.

Soto had presented the teller with a driver's license and an American Express card in Bradley's name. As Soto was being escorted out of the bank by police, he gestured to a Hispanic woman (Yessica Amaro), who then drove off in the Chrysler. A record search indicated that the Chrysler had been purchased and registered in the name of `Gregory Bradley’ in February of 2007. . . .

Amaro later arrived at the Saugus police station in the Chrysler. . . . [and] attempted to retrieve a set of car keys from Steven’s impounded belongings. When officers confronted [her] about the ownership of the Chrysler, [she] claimed it had been purchased a few days earlier by Bradley. . . . Police impounded the Chrysler. An inventory of the contents disclosed the Gateway laptop.

On March 27, 2007, a federal Magistrate Judge issued a “warrant for the search of the contents” of the Gateway laptop seized from the Chrysler. U.S. v. Soto, supra. The laptop was searched and officers found evidence that was later used to charge Soto with fraud in violation of federal law. U.S. v. Soto, supra.

Soto moved to suppress the evidence seized fro the hard drive of the Gateway laptop, arguing that the search violated his rights under the 4th Amendment. U.S. v. Soto, supra. The prosecution argued that Soto “lacked standing” to challenge the search of the laptop. As Wikipedia explains, “standing” refers to “ the ability of a party to demonstrate to the court sufficient connection to and harm from the . . . action challenged to support that party's participation in the case.” As Wikipedia also notes, to have standing the person must have personally suffered “an invasion of a legally protected interest”. Here, this meant that Soto’s rights under the 4th Amendment must have been implicated by the search of the laptop.

The district court judge began his analysis of those issues by noting that it was “not a mater of serious debate” that the officers had probable cause to impound the Chrysler in which officers found the laptop. U.S. v. Soto, supra. The judge then explained that

[i]t is a common-sense proposition that `a defendant who knowingly possesses a stolen car has no legitimate expectation of privacy in that car.’ U.S. v. Tropiano, 50 F.3d 157 (U.S. Court of Appeals for the 2d Circuit 1995). It is equally well established that the contents of a lawfully impounded vehicle may be without a warrant as part of a standardized administrative procedure. . . . If the impoundment is proper, evidence of criminal activity will not be suppressed even if officers have a contingent suspicion that the vehicle contains incriminating items. . . . Finally, the Fourth Amendment permits officers following a standardized procedure to inventory the contents of closed containers, locked or unlocked, found in the storage compartments of the vehicle.

The judge noted, though, that even if “ the inventory policy of the Saugus police permitted the opening of closed containers (there is no evidence of the policy in the record, but most do), it is doubtful that such a policy would permit the `inventory’ of the contents of a computer hard drive, effectively a secure container within a closed container.” U.S. v. Soto, supra. The judge also noted that there

The case turned on the fact that for want of an alternative, the defendant considered the bridge his home. There is no evidence Steven Soto had a similar subjective regard for the sanctity of the Chrysler -- it appears to have been merely one of the many vehicles that he acquired by fraud and freely shared with his associates.

The judge decided, however, that Soto’s claim was “more properly weighed in the context of the law of abandonment”, noting that in

The federal district court judge then explained that

Whether a defendant has retained an objectively reasonable expectation of privacy in allegedly abandoned property is a matter of law for the court. . . . Here, I have no difficulty concluding that by leaving his computer in a stolen car given over to the possession of a third party, Steven Soto forfeited any legitimate expectation of privacy that he may have had in its hard drive. In sum, despite a legitimate claim of ownership, [Soto’s] motion to suppress the contents of the hard drive will be denied for lack of standing.

I don't understand Soto's claim here. Is he trying to claim that the 4th Amendment protects his car against inventory searches, or protects his laptop against search warrants? Why is the existence of the warrant just a footnote? I'm not a lawyer, but I would've thought that the existence of a warrant would render the whole issue moot.

You may not be a lawyer, but you raise a good point.

Since I don't have access to the briefs in the case, I can't be sure exactly what Soto was arguing . . . but it seems as if his argument must have assumed that the search of the laptop was justified under the inventory search (or maybe vehicle) exception. Otherwise, why would the judge spend time discussing either?

Maybe Soto argued that the search warrant was not valid because it wasn't based on probable cause (for some reason) . . . .

Maybe he argued that the seizure of the laptop wasn't valid under the 4th Amendment . . . because at one point in the opinion the court says no defendant had standing to challenge the seizure.