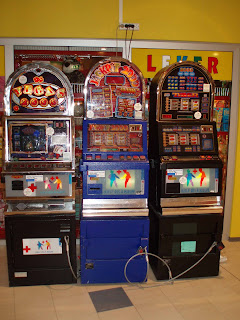 A recent decision from the Mississippi Court of Appeals addressed an issue I, at least, hadn't run across before. The case isn’t a criminal case, as such – it involved criminal charges, but the issue this post will deal with with arose after the prosecution voluntarily dismissed those charges.

Let’s start, as usual, with how the case arose:

The State filed criminal charges against Ronnie Moore and Jeff Moore in the Clay County Justice Court for their involvement with the internet café. On October 16, 2007, the State requested that the charges . . . be dismissed without prejudice until its cybercrime unit could analyze the machines. On October 18, 2007, the justice court heard arguments regarding whether the seized equipment should be returned to the Moores following the State's dismissal of the criminal charges.

The Moores appealed the circuit court’s order, raising “four issues,” which the Court of Appeals “consolidated into two: whether the circuit court erred in finding that the machines were illegal slot machines and that the justice court did not have jurisdiction over the seized machines.” Moore v. Mississippi Gaming Commission, supra.

Here, according to the Court of Appeals, are the essential facts involved in this case:

The Moores owned and operated the Paradise Isle Internet Café, which provided internet access at an hourly rate and sold long-distance telephone cards. Telephone cards could be purchased using a point-of-sale register operated by an internet-café employee for a minimum of one dollar. Customers who wished to purchase more than five dollars worth of phone time were instructed to complete their purchase at one of the internet café's computer terminals. For each dollar spent, customers received 100 `sweepstakes points.’ No purchase was required to participate in the sweepstakes, and customers could request a free entry form from an internet-café employee.

As a customer played a game, points would be accumulated and displayed in a separate `win account.’ Points won could not be used for additional play. Instead, when a customer had played all of his sweepstakes points, he would be given the option of using the points from the `win account’ to buy additional phone time, which included additional sweepstakes points, or redeem his points for cash. The Moores contend that playing the games had no impact on sweepstakes winnings; instead, winnings were pre-determined upon activation of the telephone card.

The Court of Appeals first addressed the Moores’ argument that the circuit court “erred in finding that the seized machines slot machines because the elements of consideration and chance were not present.” Moore v. Mississippi Gaming Commission, supra. A Mississippi Statute – Mississippi Code § 75-76-5(ff) – defines a slot machine as any

mechanical, electrical or other device . . . which, upon insertion of a coin, token or similar object, or upon payment of any consideration, is available to play or operate, the play or operation of which, whether by reason of the skill of the operator or application of the element of chance, or both, may . . . entitle the person playing or operating the machine to receive cash, premiums, merchandise, tokens or anything of value, whether the payoff is made automatically from the machine or in any other manner.

The Court of Appeals noted that the Mississippi Supreme Court has held that a gambling device is a slot machine if it satisfies three conditions:

1. Its play or operation requires the insertion of money, tokens or similar objects, or payment of consideration; and 2. As a result of playing or operating the device, the player or operator has the potential to win a reward in the form of cash, premiums, merchandise, token, or anything of value; and 3. The winning of some part or all of the potential reward is dependent in substantial part on an element of chance.

`For one dollar, the Lucky Shamrock dispense[d] a two[-]minute emergency long[-] distance calling card, good only for one call no matter the time actually used. With each card, the purchaser also receive[d] a game piece. This ha[d] a bar code on the back which [was] read by the machine as the card [was] being dispensed. The display on the machine then simulate[d] a slot machine by spinning nine squares. After a few moments the display show[ed] the same combination of squares as on the game piece. Again simulating a slot machine, the machine light[ed] up and play[ed] music if the patron [was] a winner. A cashier at the store verifie[d] the winning card. This clerk then [paid] the prize money[, which could] be in the amount of one dollar up to five hundred dollars.’

The Court of Appeals noted that the Six Electronic court held that the Lucky Shamrock was an illegal slot machine, and saw no reason to reach a different result in this case:

While the gambling devices seized from the internet café were computer terminals and not vending machines, they operated in a nearly identical fashion. Internet-café customers would purchase a telephone calling card, swipe the card through a card reader attached to the computer terminal, and `play’ sweepstakes points by selecting various video games that simulated slot machines. Customers could use points won to purchase more phone time or redeem points for cash.

Customers who purchased cybertime were given a plastic access card with an assigned account number. For every dollar of cybertime purchased, the customer received 100 sweepstakes entries. Customers would swipe their access cards through an electronic reader, which revealed whether they had won or lost. The electronic readers allowed customers to reveal their sweepstakes entries by playing `casino-style’ games.

The owners of the internet café in Barber argued, like the Moores do here, that . . . consideration and chance were missing from the sweepstakes. [They] argued that consideration was paid for cybertime and no additional consideration was paid to participate in the sweepstakes. However, the Barber court noted that few customers used the internet kiosks while customers `were lined up at all hours to use the readers.’ Additionally, customers `purchased additional cybertime -- with the accompanying entries -- even though they already had large quantities of unused cybertime.’ The court concluded that if customers were `paying to play the readers, rather than to acquire, or in addition to acquiring, cybertime, the element of consideration . . . [was] satisfied.’

The Court of Appeals noted that (i) at the Moore's internet café, “there were thirty-nine computer terminals equipped with card readers, but only a single computer devoted to internet access”; (ii) E.W. Williams, an MGC agent, “testified that the employee who sold him a telephone card did not explain how to use the card or . . . how many minutes were on [it]”; and (iii) Williams said “he did not know the access card . . . was also a telephone card.” Moore v. Mississippi Gaming Commission, supra. The court held that the Moores’ customers, like the customers in Barber, were buying “prepaid telephone cards to play the computer terminals rather than to make telephone calls”, which meant the “element of consideration is satisfied.” Moore v. Mississippi Gaming Commission, supra.

Finally, the Moores claimed the element of chance was not present in this case because

the outcome of each sweepstakes entry was determined before the customer purchased the telephone card. However, in Six Electronic, this Court explained that the element of chance is considered from the player's point of view; `[w]hat the machine “knows” does not affect the player's gamble.’ . . .

Additionally, the Barber court concluded that even though the outcome of the sweepstakes entries was predetermined and not impacted by playing games on the electronic readers, the element of chance existed at the point of sale. . . . We see no reason to find differently here. While playing the games at the computer terminals did not impact the outcome of the sweepstakes points, an element of chance still existed because a consumer who purchased a telephone card did not know whether the card contained a winning or losing sweepstakes points.