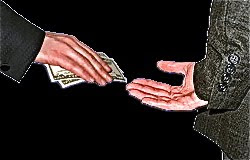 A law dictionary – indeed, what is probably the classic law dictionary – defines “fraud” as a “knowing misrepresentation of the truth or concealment of a material fact to induce another to act to his or her detriment.” Black’s Law Dictionary (9th ed. 2009). Black’s is defining the traditional kind of fraud: As I’ve noted in earlier posts, the crime we know as fraud was developed centuries ago to address a type of theft.

As I explained in those posts, theft is taking someone’s property without their permission; it becomes robbery if you use force to take the property. Fraud, though, is different: You use false statements to trick the victim into handing over his/her property voluntarily . . . so it’s really not “theft” in the classic sense. That’s why English common law came up with the new crime of “larceny by trick”, or theft by trick, which eventually became known as “fraud.” You trick the person into giving you their property, which they wouldn’t do if they weren’t operating under a misapprehension as to what the facts are.

That brings me to the evolved type of fraud we’ll examine in this post: “Computer fraud” in violation of California law. California Penal Code § 502(c)(1) says that anyone who

[k]nowingly accesses and without permission alters, damages, deletes, destroys, or otherwise uses any data, computer, computer system, or computer network in order to either (A) devise or execute any scheme or artifice to defraud, deceive, or extort, or (B) wrongfully control or obtain money, property, or data [is guilty of a crime].

Under California Penal Code § 502, then, computer fraud has the following elements: (i) knowingly (ii) accessing and altering/damaging/deleting/destroying/using data to (iii) devise/execute a scheme to defraud or wrongfully control/obtain money, property or data. Section 182(a)(1) of the California Penal Code makes it a separate crime for “two or more persons” to conspire to “commit any crime”, including computer fraud.

[Nemati] was one of several persons involved in a scheme to alter grades recorded in the computer system of Diablo Valley College (Diablo Valley), a community college with an enrollment exceeding 20,000 students. A student who worked in the Diablo Valley admissions office, Rocky Servo, was given access to the school's records database and discovered he could alter grades recorded in the system. At some point in 2003, Servo began to accept money in return for changing students' recorded grades.

When Servo was fired for unrelated reasons in 2004, he recruited a coworker to carry on the grade-change operation. When this student transferred to another school in 2006, he passed the business to a third student. The operation unraveled in February 2006, when this student was terminated from the admissions office and confessed to police. . . .

Servo knew [Nemati], a student at Diablo Valley, prior to the commencement of the scheme. At some point in 2004, Servo began accepting grade-change requests from [Nemati] on behalf of other students. [He] gave Servo envelopes containing the requests and money collected from the requesting students, and Servo made or arranged for the changes.

Servo continued to accept such requests from [Nemati] after he left the admissions office in September 2004, passing them to his successor, and eventually met with [Nemati] `four or five’ times, accepting `two or three’ grade-change requests each time. Four Diablo Valley students testified they gave [Nemati] a list of classes and cash and later learned their grades had been changed.

According to the opinion, when Nemati testified at trial he “acknowledged a passing acquaintance with Servo,” admitted knowing another witness, conceded “acquaintance with a third witness and “said a fourth . . . looked familiar”. People v. Nemati, supra. He also denied “any involvement in the grade-changing scheme” but could not “explain why the witnesses chose to implicate him.”

After he was convicted, Nemati appealed his conviction to the Court of Appeals, raising two issues we’ll get to later in this post. I want to begin by analyzing whether the grade changing operation amounted to computer fraud in violation of § 502(c)(1). To do that, let’s analyze what the opinion says Servo did; for the purposes of analysis, only, we’ll assume Servo engaged in the conduct the opinion attributes to him.

According to the court, he “accessed” a computer system and “altered” data. If we accept what the court says, then Servo committed the first two elements of computer fraud. What about the third element? The first option here is that the data was accessed and altered to execute a scheme to defraud. As I noted above, “fraud” involves deceiving someone to trick them into surrendering property or money. Who, then, would this scheme have been designed to defraud? Presumably it wasn’t the students who were paying to have their grades changed, because they got what they paid for. Was it the college itself? . . . the other students, those who didn’t pay to have their grades changes? I don’t see how it could be the other students because they weren’t defrauded into surrendering anything of value; the surrender, if one existed, came on the part of the college’s computer system (or the college, maybe). I’m not sure these facts would support a true “fraud” case.

That brings us to the second option for the third element: that the scheme was to wrongfully obtain money or property. (The statute also includes data, but I don’t see that the data was the object of the scheme we’re postulating here.) Black’s Law Dictionary defines “wrongful” as “[c]ontrary to the law; unlawful”. Was it contrary to the law to take money to change grades? It looks like bribery, but I couldn’t find a California bribery statute that applied here; the ones I found applied to bribing government officials, jurors, employees of financial institutions, employees who take money to give up trade secrets, etc. If we accept what the opinion says about what Servo and the others were doing, it clearly involved obtaining money, so that doesn’t seem a problematic factor. But it looks like establishing that the conduct was “wrongful” could be somewhat problematic.

That, I’m afraid, ends my digression on the substantive crime of computer fraud . . . with which, of course, Nemati was not charged. He was charged with conspiring to commit computer fraud and appealed, arguing that the conviction should be set aside for either or both of two reasons.

conspiracy is generally held to be three years, commencing with the last overt act committed in furtherance of the conspiracy.. . . The last overt act in furtherance alleged in the information occurred on August 16, 2005. The statute ran from that date until an arrest warrant was issued on September 30, 2008, more than three years later. . . . Accordingly, under the allegations of the information, the prosecution was not commenced until after the expiration of the statute of limitations.

The prosecution argued that the case was commenced before the statute of limitations ran because “there was evidence at trial of acts in furtherance of the conspiracy as late as February 2006, thereby proving the prosecution timely under a three-year statute”. People v. Nemati, supra. The Court of Appeals agreed with the prosecution:

Julian Revilleza, assumed grade-changing duties after Servo's firing in 2004. Although Revilleza did not describe any specific grade changes after September 2005, it can be inferred from his testimony that he made such changes periodically but continuously from the time he took over until he transferred to another college in January 2006, after training his replacement, Jeremy Tato. . . .

Tato testified he made several grade changes between January and February 2006. Finally, the changes requested by [Selymon] Shahsamand and arranged by [Nemati] occurred in February 2006. All of this activity was undertaken in furtherance of the conspiracy. . . . Accordingly, there is no question the prosecution was timely commenced under a three-year statute of limitations.

Nemati’s other argument arose under Penal Code § 111, which provides as follows:

An accomplice is . . . one who is liable to prosecution for the offense charged against the defendant on trial in the cause in which the testimony of the accomplice is given.

At trial, the judge “properly identified Servo and the four witnesses who testified they gave money to [Nemati] as accomplices to the conspiracy and instructed the jury that additional corroborating evidence was required to tie [him] to the crime.” People v. Nemati, supra. Nemati argued that the jury’s “implicit finding of such evidence was unsupported”, i.e., corroborating evidence wasn’t presented. People v. Nemati, supra. And the Court of Appeals noted there was no direct evidence of Nemati’s involvement

in the conspiracy outside the testimony of the accomplices. No written communications by [Nemati] relating to the conspiracy were submitted. While there was documentary evidence confirming that grade changes occurred at the times and in the manner claimed by the witnesses who paid [Nemati], none of this documentary evidence mentioned [him]. Further, each of the non-accomplice witnesses either was unaware of [Nemati] or was familiar with his name only because it had been mentioned by one of the accomplices during the investigation.

Notwithstanding this, the court found that “adequate corroborating evidence” was

provided by [Nemati’s] testimony that he knew Servo and three of the four witnesses who claimed to have given him money to obtain grade changes. This acknowledgment confirmed that [Nemati] was in a position to play exactly the role the witnesses unanimously claimed for him: that of intermediary between Servo, who controlled access to the persons making the grade changes, and the students who provided money to obtain grade changes. . . . [T]he admission thereby tends to implicate [Nemati] by relating to an element of the crime -- the agreement necessary between participants in a conspiracy.

The Court of Appeals also noted that Nemati’s “acknowledged personal connections, and his inability innocently to explain their incriminating nature, permitted the jury to be reasonably satisfied that the common story of these witnesses was true.” People v. Nemati, supra.

The court therefore affirmed Nemati’s conviction and, in so doing, upheld the sentence of three years’ probation imposed on him by the trial judge. People v. Nemati, supra.