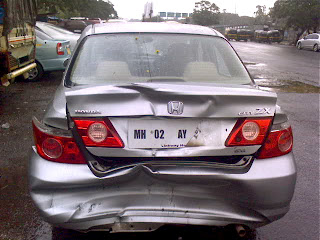 Early on November 1, 2009, Portland Police Officer Gary Doran observed a maroon Pontiac driving at a high rate of speed on the freeway off-ramp of I–205. Doran was driving eastbound on SE Washington Street toward a light-controlled intersection where the freeway off-ramp meets the street. The light was green for Doran . . . and red for the Pontiac. Doran observed the Pontiac run the red light. He noticed the driver was an African–American male wearing a red sweatshirt, and his passenger was an African–American male wearing a black sweatshirt.

Doran pursued the Pontiac with his lights and siren activated. [It] rolled through another red light and turned left onto SE Stark Street. The Pontiac accelerated and ran through a third red light where SE Stark Street meets the southbound off-ramp of I–205. Doran radioed that he was in pursuit of a reckless driver.

The Pontiac ran a fourth red light at SE Stark Street and 92nd Avenue. As [it] approached 82nd Avenue, Doran decided to terminate the chase, radioed for assistance, and slowed his car. The Pontiac continued towards 82nd Avenue, but the driver began to lose control. The Pontiac fish-tailed through the intersection, drove onto the sidewalk, hit a wall, and crashed into a parked truck. Doran reactivated his lights and siren as he approached the crash. As the driver and passenger exited the Pontiac, Doran shouted `Stop! Police! You are under arrest!’ The driver and passenger ran west on SE Stark Street. Doran tried to pursue them, but lost sight of the men. . . .

Additional officers arrived. Doran saw an African–American male [Jefferson Bryant Davis] wearing a white tank top running across the 8000 block of SE Washington Street. Several officers took [Davis] into custody, patted him down for weapons, and put him in the patrol car. The[y] asked [Davis] if he was in the car that crashed, and [he] denied any involvement.

At the motel, Doran spoke to the manager. . . . [and asked if Davis] of Ellis Mathews rented a room at the motel. The manager [said] Mathews rented room 45. . . Doran requested a key for room 45 because he had heard a female's voice on the phone, and believed she was trespassing.

[Officers] knocked on the door of room 45. Two juvenile girls . . . answered. The officers told the girls they were trespassing, and asked for their names. After the girls identified themselves, the officers learned they were listed as missing in the law enforcement data system. . . . [T]he girls said they were waiting for `a black guy named J.B.

The officers showed the girls a photograph of [Davis] and the girls identified him as `J.B.’ [They] told the officers `J.B.’ was wearing a red sweatshirt and drove a maroon car. . . .. Both were transported to the East Precinct.

U.S. v. Davis, supra. Davis was later indicted on “six counts related to the sex trafficking of minors” and moved to suppress “all physical evidence and statements obtained as a result of the warrantless search and seizure of his phone.” U.S. v. Davis, supra.

Davis began by arguing that Doran’s seizure of his cellphone violated the Fourth Amendment, but the district court judge disagreed. U.S. v. Davis, supra. He held that the phone was “lawfully seized as part of an inventory search before the crashed vehicle was towed away.” U.S. v. Davis, supra.

As Wikipedia explains, the 4th Amendment creates a right to be free from “unreasonable” searches and seizures. As Wikipedia also notes, a search interferes with a reasonable expectation of privacy in a place or thing, and a seizure of property interferes with the owner’s possession and use of the property. To be reasonable, a search or seizure must be conducted pursuant to a search warrant or to an exception to the warrant requirement.

As this site explains, an inventory search, which “is the routine inventory of an impounded vehicle” is such an exception. As the site also notes, a “warrant is not required because the state, in legally impounding the vehicle, bears legal liability for the contents of the vehicle.” The Supreme Court has held that inventory searches “protect the owner's property from vandalism, protect the police from disputes about damage to the property, and protect individual officers from unknown danger associated with vehicle storage.” To be valid, an inventory search must be conducted pursuant to a police department’s policy regarding the scope of such searches.

The Davis judge found that the cellphone was lawfully seized because “the Portland Police Bureau has a policy that requires officers to collect any valuable items from a vehicle before it is towed.” U.S. v. Davis, supra. The judge also found, however, that a “lawful inventory search does not authorize an officer to examine the contents of a cell phone”, which meant the government would have to show the search of the phone was justified by another exception, or lose on the motion to suppress. U.S. v. Davis, supra.

The prosecution first argued that the search was authorized by the vehicle exception, which allows officers to search motor vehicles because they are mobile (makes it hard to get a warrant) and because we have a lesser expectation of privacy in them (used in public and regulated by the government). U.S. v. Davis, supra. The Davis judge noted, therefore, that for the exception to apply, the item searched must have been located in a “vehicle that is readily mobile” and the officer must have had probable cause to search the item for evidence of a crime.” U.S. v. Davis, supra.

The judge found it was “unclear” whether Doran believed the Pontiac “reasonably appeared to be mobile”, but ultimately rejected the applicability of the vehicle exception on the grounds that “the government has failed to meet its burden on the probable cause requirement.” U.S. v. Davis, supra.

The government contends that `Doran could search the entire contents of the cell phone for physical addresses of the suspect/owner, incoming and outgoing calls, photographs to determine the identify and or location of the suspect who committed the traffic offenses and or prove his attempt to elude on foot.’ This argument is unpersuasive.

When Doran searched the phone, [Davis] was already in custody and en route to the precinct. The identity of the driver could be confirmed once Doran confronted [Davis] with the cell phone, or inquired about its owner. Moreover, Doran testified he had no reason to suspect [Doran] committed any crimes beyond the reckless driving offenses, and had no probable cause to believe that contraband would be located in the vehicle. The automobile exception is inapplicable.

The prosecution then argued that the exigent circumstances exception authorized the search. U.S. v. Davis, supra. In ruling on this argument, the judge noted that to justify

a warrantless search based on exigent circumstances, the government must show that: `(1) considering the totality of the circumstances, law enforcement had an objectively reasonable basis for concluding there was an immediate need to protect others or themselves from serious harm; and (2) the search's scope and manner were reasonable to meet the need.’ U.S. v. Reyes-Bosque, 596 F.3d 1017 (U.S. Court of Appeals for the 9th Circuit 2010). Exigent circumstances arise when a reasonable person would believe that the warrantless entry was necessary to prevent physical harm, destruction of evidence, escape of the suspect, or some other consequence frustrating legitimate law enforcement efforts.

Here, the prosecution argued that Doran “was in `hot pursuit’ of the driver of the Pontiac, and needed to verify if the man they had in custody . . . was the reckless driver, or if the driver remained at large and continued to pose a danger to the community.” U.S. v. Davis, supra. After noting that “the phrase `hot pursuit’ implies some sort of chase” and that “[a]t the time of the warrantless search [of the cell phone], the chase had ended” because Davis was in custody, the judge held that the exigent circumstances exception also did not apply here. U.S. v. Davis, supra.

The judge then noted that while the government failed to show that an exception justified the search of the cellphone, “if the government can establish by a preponderance of the evidence that the unlawfully obtained information would have been inevitably discovered by lawful means, then the evidence should not be suppressed. U.S. v. Davis, supra (citing Nix. v. Williams, 467 U.S. 431 (1984)). The government argued that “it would have inevitably obtained the incriminating statements from VCC and CM on November 1, 2009 absent the unlawful phone search and the officers' arrival at the Montavilla Motel”, but the judge disagreed. U.S. v. Davis, supra.

He pointed out that the “improper search” of Davis’ phone “directed the officers to the Montavilla Motel where VCC and CM were discovered.” U.S. v. Davis, supra. Since the government “produced no evidence showing that the discovery of the girls would have occurred absent the illegal search”, the judge held that their statements must “be suppressed as fruit of the illegal search.” U.S. v. Davis, supra.

The judge therefore granted Davis’ motion to suppress the other statements and physical evidence discovered as a result of searching the cell phone. U.S. v. Davis, supra.

The cop's testamony does not pass the smell test.

Why would the cop say that just because he heard a female voice on the phone he assumed that she was a trespasser? A guest is not a trespasser. She just as easily could have been a guest or the child of the guy.