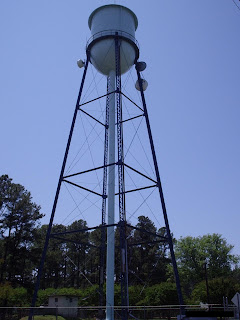 As Wikipedia notes, the crime of arson is generally defined as “intentionally or maliciously setting fire to structures or wildland areas.” The Model Penal Code, an influential template of criminal laws, expanded the definition of the crime a bit. Under § 220.1(1) of the Model Penal Code someone “is guilty of arson . . . if he starts a fire or causes an explosion with the purpose of” destroying a building or occupied structure or “destroying or damaging any property . . . to collect insurance for such loss.”

Duane Levien. . . . oversaw the water system for Calamus. . . . . On November 12, 2007, Levien was approached by an unnamed citizen and handed a printout from a website known as `freeworldkgb.’ [It] was of a slideshow entitled `Target for Tonight.'

The first slide contained a photograph of the Calamus water tower with the text, `I am thinking that if we drop enough Thorizine (sic) in the city water supply it might calm the population down enough so they wont (sic) call us n–––––s anymore, or dumb Jew n–––––s.’ The second slide had a photograph of a toad and said `with his help, freeworldkgb has procured 500 pounds of Thorizine (sic).’ Subsequent slides contained photographs of three city residents with various comments, including a statement, `I have decided that they could use some medication.’ . . . [T]he `freeworldkgb website belonged to [Jeffrey] Soboroff.

Levien knew Soboroff . . . had both made and been the subject of complaints within the community. Levien had signed a petition to have Soboroff civilly committed in June or July 2007. . . .

Levien believed `Target for Tonight’ was a reference to the previous night. He contacted the Sheriff's Office and the regional field office for the Iowa Department of Natural Resources. Levien then flushed the entire Calamus water system and drained all the water out of the tower and the reservoir tank, a process that took five to six hours. [He] did not take a sample of the water to test whether any Thorazine had actually been placed into the water tower or the reservoir tank.

During the video, Soboroff acknowledged twice that the officers were looking for 500 pounds of Thorazine. When [they told] Soboroff they were seizing his computer, [he] questioned why, and then stated, `Look, that is a satirical article, that's all that that is.’ The background image on Soboroff's computer was a picture of the Calamus water tower. The officers did not find any Thorazine during the search.

The case went to trial. After the evidence had been presented, and before submitting the case to the jury, the judge instructed them that to convict Soboroff they had to find beyond a reasonable doubt (i) that he threatened “to place a destructive substance” in the city’s water supply, (ii) that the substance “as of a type that would endanger persons or property” and (iii) that he “made the threats willfully and unlawfully.” State v. Soboroff, supra. The jury found Soboroff guilty, the judge sentenced him to a prison term “not to exceed five years” but suspended the sentence and put him on probation for two years.” State v. Soboroff, supra.

Soboroff then appealed, arguing that the evidence presented at trial was “insufficient evidence to sustain his conviction because § 712.8 which is part of the `arson’ chapter of the Iowa Code, applies only to threats . . . involving materials that might cause fires or explosions, not to materials whose harmful effects occur when they are consumed within the human body.” State v. Soboroff, supra. The prosecution, on the other hand, argued that “Thorazine was a “destructive substance or device” in this case because it could ruin the water supply and endanger people.” State v. Soboroff, supra.

The Supreme Court began its analysis of these arguments by noting that its “primary goal in interpreting a statute is to ascertain and give effect to the legislature’s intent.” State v. Soboroff, supra. It also noted that the state legislature “has not told us what they meant by `destructive substance or device.’” State v. Soboroff, supra. So it did what courts usually do in this situation, i.e., check out dictionary definitions. The court explained that the word “destructive” “is broad. It is defined by one dictionary as `having the capability, property, or effect of destroying.' Webster's Third New International Dictionary 615 (unabr. ed. 2002). `Destroy’ is then defined as: `to ruin the structure, organic existence, or condition of.’ Id.” State v. Soboroff, supra.

The Supreme Court noted that in U.S. v. Jones, 308 F.3d 748 (2002), the U.S. Court of Appeals for the 7th Circuit held that anthrax spores would be a “destructive substance” within the meaning of 18 U.S. Code § 31(a)(3), which defines “destructive substance” as “an explosive substance, flammable material, . . . or other chemical, mechanical, or radioactive device or matter of a combustible, contaminative, corrosive or explosive nature”. State v. Soboroff, supra (emphasis added). It also noted that the legislature did not specifically limit the scope of § 712.8 to explosive or incendiary materials; instead, it added the reference to a “destructive substance or device”, which must have been meant to expand the statute’s applicability beyond that of traditional arson statutes. State v. Soboroff, supra.

The Supreme Court therefore agreed with the trial judge that § 712.8 can encompass a

threat to put . . . a psychotropic drug into a town's water supply. This kind of threat, like a threat to release radioactive -- but not incendiary or explosive -- matter, can be viewed . . . as involving a `destructive substance.’ Substantial evidence therefore supports a jury finding that Soboroff's statements on his website related to the placement of a destructive substance in a place where it would endanger people.

The court did not, though, affirm Soboroff’s conviction. He also argued, on appeal, that his attorney was ineffective for “not requesting a jury instruction that defined “threat” and made it clear that a reasonable person of ordinary intelligence would have understood Soboroff’s comments and actions as a “threat” under § 712.8. State v. Soboroff, supra. The Iowa Supreme Court agreed with Soboroff on this one:

While there was substantial evidence of a real threat, there was also evidence from which a jury could have concluded that Soboroff's statements were `idle talk.’ . . .The State's own expert testified that Thorazine is available only by prescription and in small quantities. It would be `near[ly] impossible’ to obtain 500 pounds of it. Someone who claimed to have such a quantity might not have deserved to be taken seriously.

Also, there was no evidence Soboroff intentionally disseminated his statements to anyone, apart from putting them on his website. And, although it is a double-edged sword, [his] reputation for instability could have supported a jury finding that a reasonable person would not take his statements. . . . [H]ad the jury been instructed on the `reasonable person’ standard for illegal threats, we think there is a reasonable probability the outcome . . . would have been different. . . .

I usually don’t opine on the outcome of the cases I write about, primarily because I sympathize with the judges, lawyers, officers, defendants and others who are involved. It’s one thing to criticize someone’s competence in a private conversation, another to “publish” your two cents on someone’s alleged fallibility.

My two cents on this case doesn’t involve criticizing any of the lawyers or judges in the case, at least not as such. I can see the logic of the Iowa Supreme Court’s analysis of whether § 712.8’s reference to a “destructive substance” can be construed to reach substances that harm people, rather than property. My reservations about the propriety of this approach are based on a basic principle of criminal law (actually, all law): As a website explains, law “must be knowable: in other words, the content of the Law. . . must be published by the State in such a way that all citizens can discover what rights and responsibilities are given to, or imposed upon, them”.

Since the threat statute at issue in this case is codified in the arson chapter of the Iowa Criminal Code, and since it encompasses the use of incendiary and explosive materials and devices, I think a reasonable person would understand it as an arson threat statute, not a drug threat statute. I also suspect that when the statute uses the term “destructive”, it means – or was originally intended to mean – materials and devices that damage or destroy property, not people. I think, therefore, that it would be a good idea for the Iowa legislature either to make it explicit that § 712.8 encompasses threats to use materials or devices that damage or “destroy” people, as well as property . . . assuming, of course, that the Iowa Code doesn’t have another threat statute that might address this type of conduct.