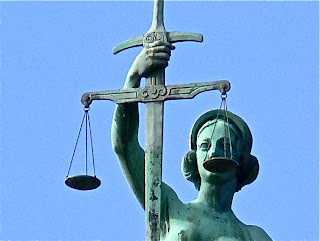 As I explained in that post, Article III of the U.S. Constitution and the Sixth Amendment to the U.S. Constitution create a right to trial by jury in criminal cases. As I noted, the jurors’ role is to be a finder of facts; if they find the facts needed to convict are proved beyond a reasonable doubt, they’re to convict. If not, they’re to acquit. They’re also, as I explained in the earlier post, supposed to base their fact-finding (and applying the law to the facts) ONLY on what they heard in court, i.e., on the evidence presented in court and the law the judge instructed them on. If jurors go outside those facts and that law, they introduce impermissible variables into their decision-making process, which can result in a verdict being set aside.

administering various grants for the benefit of the . . . Sheriff's Department. At issue below was whether [he] violated the terms of three grants awarded to the Braxton County Commission by the West Virginia Commission on Drunk Driving Prevention for the purpose of funding equipment or hiring personnel to aid in the enforcement of drunk driving laws. According to the State, the evidence demonstrated [Dellinger] claimed credit for hours he had not worked and time he spent on administrative duties. . . . [T]he State argued that the grant requirements . . . did not provide for payment for administrative work.

[A]fter she sent this message to [Dellinger], the two became MySpace `friends’. . . .


At the . . .hearing . . . Hyre testified that although she and [Dellinger] were MySpace `friends’ the two had never had a face-to-face conversation and did not have a close, personal relationship. She testified that he was `[j]ust somebody I knew,’ and explained that `I knew him. I mean he's a cop in the county; everybody knows all the cops.’ . . .

After the hearing, the trial judge denied Dellinger’s motion for a new trial, finding that

Hyre's `contact with [Dellinger] was minimal, and she was a fair and impartial juror.’ The court found that Hyre `acknowledged that she knew of [him]' from his time . . . as a deputy. . . She also stated that for a time they lived in the same apartment building, but that she has never had a face-to-face conversation with [him].

State v. Dellinger, supra. The judge also found that her MySpace posting “`did not state which trial she was hearing or any facts or opinions about the trial’” and that she didn’t “`disclose this internet contact with’” Dellinger “because she does not feel she really knows [him] as these e-mails represent the entirety of their relationship.’” State v. Dellinger, supra. He appealed, as noted above, to the West Virginia Supreme Court.

because she did not personally `know ‘[Dellinger]' belies the fact that, at the very least, she believed she knew him well enough to give him advice about his divorce. In her February 7, 2008, MySpace message . . . she wrote, `I dont know you very well But I think you could use some advice!’ In stating “I dont know you very well,” it is obvious Hyre felt she knew [him] to some degree; . . . she at least believed herself to be familiar enough with [him] she proceeded to offer him spiritual counsel. Hyre's familiarity with [him] is further suggested by her message's closing remark of `[t]alk soon.’

Furthermore, Hyre formerly lived in the same apartment complex as [Dellinger] but did not reveal that information either. . . .

[W]e hold that the trial court was clearly wrong in finding Hyre to be a `fair and impartial juror.’ To the contrary, . . . Hyre intentionally and repeatedly failed to be forthcoming about her connections to [Dellinger and the two witnesses], arguably, to improve her chances of serving on [his] jury. Whatever her reasons for doing so, she cannot be considered to have been indifferent or unbiased. . . . . We, therefore, reverse the court's August 11, 2008, order and remand this case for a new trial.

Maybe you’re wondering why Dellinger didn’t raise the fact that Hyre at least knew him during voir dire and/or at some other time before the jury returned its verdict? According to this opinion, Dellinger said

he did not then recognize Hyre to be the . . . `Amber’ who wrote to him on MySpace. Apparently, `Amber’ from MySpace did not include her last name and, according to [Dellinger], Hyre looked very different from her photograph posted on the website. As indicated above, [he] alerted the trial court to Hyre's MySpace message just following the verdict, having first learned that Hyre and `Amber’ were the same person only a short time earlier.

State v. Dellinger, supra. In a footnote, the Supreme Court pointed out that

unlike Hyre, [Dellinger’s] first and last names appeared on MySpace; identified him as a law enforcement officer; and . . . included a photograph of him in his law enforcement uniform. Thus, we agree with [his] contention that Hyre could not have reasonably failed to recognize [Dellinger] as the defendant in the trial below.

And while I’m pointing things out, the prosecution’s brief on appeal includes some comments the trial judge made in denying Dellinger’s motion for a new trial which put that ruling into a little more context, maybe:

`It would have troubled the Court if Amber Hyre would have been a social acquaintance of the defendant or something of that sort. While I respect [defense counsel's] argument involving mere acquaintance, I don't know that Ms. Hyre's relationship with any of these parties or with the defendant even comes up to the definition of an acquaintance, in the matter, quite frankly, I would never get a jury in this county on any case because this county is so small that people come in contact everyday. . . . But . . . mere acquaintance, I do not believe it's sufficient and enough to show bias by a juror in the matter.’

Sounds like she was stalking him. Seeks him out on MySpace AFTER she received the jury summons (which would have had his name on it). Lies about her relationship with two of the witnesses.