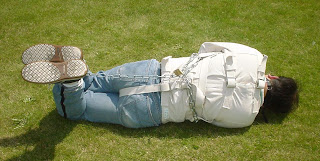 You may have seen the stories about the woman who was recently sentenced to a year in jail for sending threatening text messages to herself.

As the Wired story explains, Jeanne Manunga sent “hundreds of threatening text messages to herself — in a bid to get her former boyfriend and his sister-in-law arrested by blaming them as the authors.” As the Wired story also notes, the “former boyfriend was arrested once and his sister [was arrested] three times” after Manunga “reported the texts she was sending to herself to three different police departments.”

According to this article in the Orange County Register, after Manunga and her boyfriend broke up, she “took out a pre-paid cell phone in his name” and used it to start “sending the threatening text messages to her regular cell phone.” She then complained to police that “the ex-boyfriend” and his sister were “behind the threats.”he Orange County Register says that the former boyfriend and his sister were

arrested on false charges of making criminal threats and required to post thousands of dollars in bail. The sister-in-law was arrested three times, and spent some time in custody before she could gather enough funds to pay the bail on her third arrest.

The Orange County Register article also says a jury convicted Manunga of “three felony counts of false imprisonment by fraud or deceit and two misdemeanor counts of making a false police report” and she was sentenced to serve a year in jail on the convictions.

I found the “false imprisonment by fraud or deceit” charge interesting for two reasons: One is that I’d not heard of the crime’s being based on fraud or deceit; the other is that Manunga didn’t “imprison” the victims herself, but used the police to do that for her. I decided to do a post dealing with those issues, starting with the fraud and deceit issue.

As Wikipedia explains, false imprisonment is “a restraint of a person in a bounded area without justification.” According to American Jurisprudence, it is “the unlawful restraint or detention of another against his . . . will . . . by actual force or reasonably apprehended force.” 32 Am. Jur. 2d False Imprisonment § 155. Manunga didn’t personally use force to restrain her former boyfriend or his sister. Instead, she tricked the police into doing this for her, which is presumably where the fraud or deceit comes into all this.

I checked the statutes of the various states that criminalize false imprisonment. Many conform to the traditional version of the offense. Colorado’s statute, for example, defines false imprisonment as knowingly “confining or restraining another without the other’s consent and without proper legal authority”. Colorado Statutes § 18-3-303(1).

I found a Minnesota case that seems to illustrate how fraud or deceit would be handled under the traditional approach to the crime. A mother was given custody of the couple’s daughter when she and her husband divorced; he got visitation rights. State v. Niska, 499 N.W.2d 820 (Minnesota Court of Appeals 1993). She gave “physical custody” of Dominique, the daughter, to her parents, who took her to Arizona when they moved there. State v. Niska, supra. The father clearly instituted an investigation, because the grandparents were arrested and charged with false imprisonment. State v. Niska, supra. The trial judge dismissed the charge and the Court of Appeals affirmed the dismissal:

On what may be the other hand, New Mexico’s statute is almost identical to Colorado’s, but I found a case in which the New Mexico Court of Appeals said false imprisonment occurs when a “defendant by trick or false representations confines or restrains a victim without the use of threats, menacing conduct or a weapon.” State v. Bachicha, 111 N.M. 691, 808 P.2d 51 (1991). That comment, though, was clearly dictum, as the defendant pointed a rifle at his victims, using that threat of physical force to keep them confined.

Obviously, Garcia used deceit to get Ms. Urista into the car, but it seems to me he also used the kind of restraint or confinement (she couldn’t get of the car) false imprisonment was traditionally based on. In other words, this seems a bit of a mixed scenario. I did find a few other cases, from other states, in which courts held that false imprisonment can be based on fraud or deceit, but they all seem to involved mixed scenarios like the one in the Garcia case. At a minimum, these cases at least indicate that false imprisonment can be predicated solely on the use or fraud or deceit to restrain the victim.

That brings us to the second issue: It was the police, not Manunga, who used force or the threat of force to confine her victims. We therefore have a disconnect between (i) the person who intentionally used fraud or deceit to achieve false imprisonment of the victims and (ii) those who actually imprisoned them. Can Manunga be held liable for falsely imprisoning the victims given that she, herself, did not directly “Imprison” them?

I finally realized the approach I assume the prosecution took (the one I, at least, think makes sense). Section 2.06(1) of the Model Penal Code says someone is “guilty of an offense if it is committed by his own conduct or by the conduct of another person for which he is legally accountable”. There are various ways in which someone can be legally accountable for another’s conduct, one of which is that he’s an accomplice to the conduct. The Model Penal Code also, though, says that someone is legally accountable for another’s conduct if, acting with the intent required for the commission of a crime, “he causes an innocent . . . person to engage” in the conduct constituting the commission of that crime. Model Penal Code § 2.06(1). Since you can’t hold the innocent person liable (they didn’t realize they were committing a crime), you impute their conduct back to the person who caused them to engage in that conduct.

That, I think, is the only way the false imprisonment by fraud or deceit charge against Manunga makes sense: She caused innocent agents (the police officers at the various agencies she contacted about being “threatened”) to engage in conduct that, as it turned out, constituted false imprisonment. The officers are the “innocents” here because they didn’t realize they were committing false imprisonment; they thought they were lawfully restraining individuals who were threatening Manunga.

When the drafters of the Model Penal Code included that provision, they weren’t thinking about someone’s using an anonymous cell phone to send threats to themselves in order to frame other people for making those threats. They were thinking of an adult (Fagin) who used children to steal or commit other crimes without realizing they were committing crimes. The Manunga case (and maybe one or two similar case I’ve heard about) suggests that this provision might be used a lot more in the future than it was in the past.

So why is this prosecution theory not used EVERY TIME someone makes a false police report to try to get someone else arrested?

Take out the cell phone crap and what you have is no different then my calling 911 right now to report that I was touched 'inappropriately' by Susan Brenner or any other person with whom I have an axe to grind (for the record - I don't have an axe to grind against Ms. Brenner -s he writes a very good blog).

But, really, how is this any different than when any makes a false police report against someone? That stuff happens all the time, yet I have never heard of anyone being convicted for false imprisonment. The smarter thing to have done would have been to get the defendant to sign a sworn statement saying that these guys were threatening her or something similar. Then you could have gotten her on a perjury beef, which is a lot more clear cut and less chance for getting reversed on appeal. Sounds like the prosecutor was just trying to be overly creative and cute here.

You make a very interesting point.

As to why it doesn't automatically happen every time someone files a false police report, here are a couple of possibilities:

(a) If the state doesn't have a false imprisonment by fraud or deceit, it might be difficult to bring such a charge (even though, if the police actually arrested the person who was the subject of the false report, had been arrested). It would be an interesting argument in this scenario, since the police officers DID use restraint against the victim . . . but I could see a defense attorney arguing that since the perpetrator (who filed the false report) didn't use restraint or force, the charge couldn't stick. In other words, here the elements of the crime are fractured between the police (restraint) and the person who's trying to have the victim falsely imprisoned.

(b) If the police don't actually arrest the potential victim, then it would be impossible to charge the aspiring perpetrator with false imprisonment . . . which would then raise the issue of whether anyone who files a false police report for a crime as to which someone can be arrested can be convicted of attempted false imprisonment (assuming the jurisdiction has the fraud or deceit option or that false imprisonment can be charged even if it doesn't).

I agree with the first poster with regard to the prosecutor trying to be be overly creative. Why not simply charge the individual with falsifying evidence a la the following case.

Thanks for sending the link to the falsifying evidence case . . . I hadn't seen it.

Actually, I think the charge in this case is pretty creative, as well. The New Hampshire falsifying evidence statute, New Hampshire Revised Statutes section 641:6, makes it a crime (essentially) to alter "physical evidence" with the purpose of impairing its "verity or availability" in an "official proceeding" the person believes or knows "is pending" or is "about to be instituted." Section 641:1 of the New Hampshire statutes defines "official proceeding" as a proceeding before a legislative, judicial or administrative body or any other body authorized to take evidence under oath.

Since no official proceeding was pending in the New Hampshire case (or in the California case), to prosecute this woman for falsifying evidence you'd have to show that she altered evidence believing a criminal prosecution was "about to be instituted" . . . which probably wasn't difficult given the facts in this case.

It looks like this approach MIGHT also work under California law. The California statute I found that seems as if it could apply to what Manunga did is Section 134 of the California Penal Code. Section 134 makes it a crime to prepare false documents with the intention that they "be produced . . . as genuine or true . . . upon any trial".

It might also work under the laws of other states.

I wonder whether the text messages in the NH case were used as evidence in the proceedings in 2008 that resulted in the conviction of her ex husband. If so, then the falsifying evidence charges may not have been a stretch.