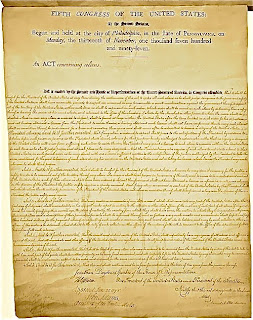 This post is primarily about a case that isn’t a cybercrime case. It’s about one of the federal statutes that were used to charge members of Hutaree, “a Christian militia group based in Adrian, Michigan.” It's also about what didn't happen here but might happen in another case.

According to this U.S. Department of Justice Press Release, 9 Hutaree members were charged with four federal crimes: seditious conspiracy, attempted use of weapons of mass destruction, teaching the use of explosive materials and possessing a firearm during a crime of violence. If you’re not familiar with the case, this Press Release summarizes the facts alleged to support the charges. What caught my eye about the case is that at least some news stories reported that the Hutaree members (Hutarees?) were being charged with conspiring to “levy war” against the United States.

That surprised me . . . because the notion of being criminally charged with levying war against (or planning to levy war against) the U.S. or any other country seemed like an oxymoron. As I’ve noted in earlier posts, nation-states must control what are essentially two categories of threats: crimes (which has historically included terrorism, think Tim McVeigh) and war.

As I’ve also explained, the crime category encompasses threats to a state’s ability to maintain internal order; it consists of citizens preying on other citizens (theft, arson, rape, murder, etc.) and on government functions that are designed to maintain internal order. Crimes in the last category include obstruction of justice (which undermines a state’s ability to arrest, convict and sanction those who commit traditional crimes like murder and arson), riot and terrorism, which is ideologically motivated crime that is intended to undermine a state’s stability from within. Law enforcement and the civil justice system deal with crime and terrorism.

War encompasses threats to a nation-state’s ability to maintain external order. The war threat comes exclusively from another nation-state because war has so far been a battle between two sovereigns (nation-states, empires, city-states, tribes, etc.). The military deals with threats to external order, and wars are resolved when one sovereign entity defeats the other.

Crime and war, therefore, are like oil and water: They simply don’t mix. There is, of course, the concept of “war crimes.” As Wikipedia explains, war crimes are “`violations of the laws or customs of war’”, such as the principles incorporated in the Hague and Geneva Conventions. The indictment that formed the basis for the Nuremberg trials held after World War II charged at least certain of the defendants with conspiring to wage aggressive war (Count 1), but that charge isn’t analogous to the charge in the Hutaree case. For one thing, in the Nuremberg trials the defendants were government officials who were charged with having the state they controlled initiate an unlawful war; and the prosecution was brought by other nation-states, who were the victims of the alleged unlawful conduct.

That may seem a lengthy digression, but it actually isn’t. My point is that individuals simply aren’t players when it comes to war. Individuals, as such, can’t “do” war; they can serve in a nation-state’s military as the implements used to wage war . . . but they, themselves, cannot “war” (using the term as a verb).

That’s why reports that the indictment charged the Hutarees with conspiring to levy war on the United States surprised me. When I reviewed the indictment in the case, which you can find here, I found the reports were accurate. Count I of the indictment charges the 9 Hutarees with “knowingly conspir[ing] . . . to levy war against the United States” (among other things). Count I is brought under 18 U.S. Code § 2384, which creates the crime of seditious conspiracy. Section 2384 provides as follows:

As a law review article explains, § 2384 was added to the federal criminal code in July 1861, a couple of months after the Civil War began. Holly Coates Keehn, Terroristic Religious Speech, 28 Seton Hall Law Review 1230 (1998). According to this article, § 2384 “saw little use after the Civil War” until it was used to prosecute Sheik Omar Abdel Rahman for his involvement in the 1993 World Trade Center bombing. As Wikipedia notes, in 1995 Rahman was convicted of seditious conspiracy and sentenced to life in prison.

That still left me wondering about the validity of the crime of seditious conspiracy. I began by parsing the crime itself. It has two elements: sedition and conspiracy. We’ll start with conspiracy. As I’ve noted, conspiracy is an inchoate, or incomplete, crime; inchoate crimes involve conduct (conspiring, attempting, soliciting) that is directed at the commission of a substantive crime (like murder). Inchoate crimes let law enforcement intervene before the perpetrators actually carry out the target crime, which is apparently what happened in the Hutaree case. Traditional inchoate crimes can’t stand alone, i.e., you can’t simply commit “conspiracy.” You can only be convicted if you conspired to commit the target crime, which, as I’ve noted, is an independent, substantive crime.

That brings us to sedition. Sedition, as Wikipedia notes, “is a term of law which refers to overt conduct, such as speech and organization, that is deemed by the legal authority as tending toward insurrection against the established order.” As Wikipedia explains, there have been several attempts to criminalize sedition in the United States; legislation to that effect was adopted in 1798 but allowed to lapse 3 years later. Similar legislation went into effect in 1917 and 1940, but the Supreme Court eventually invalidated both of those laws. If you’d like to know more about attempts to criminalize seditious speech, check out the article you can access via the “Complicit Publication” link on the blog.

Sedition, then, is a dead letter as far as the federal criminal code is concerned, which means § 2384 seems to create a free-standing conspiracy crime, i.e., it’s a conspiracy crime that doesn’t link to a substantive target crime. That is apparently the correct interpretation of this offense. In U.S. v. Parrett, 872 F. Supp. 910 (U.S. District Court of the District of Utah 1994), a federal judge explained that in 1948 Congress consolidated most of the conspiracy offenses then included in the federal criminal code (Title 18) into a single omnibus conspiracy statute: 18 U.S. Code § 371. Congress noted that it made a few exceptions, some of which were based on the fact that the “conspiracy would constitute the only offense”. U.S. v. Parrett, supra. Section 2384 was one of these exceptions, which means the only crime is conspiring to engage in the conduct listed in the statute, e.g., conspire to levy war against the United States.

So to commit seditious conspiracy you don’t have to conspire to commit a substantive federal crime, and you also don’t have to actually do anything. Courts have long noted that to convict someone under this statute, you don’t have to commit an “overt act,” i.e., don’t actually have to do anything to further the goals of the conspiracy. U.S. v. Rahman, 854 F.Supp. 254 (U.S. District Court for the Southern District of New York 1994). That’s why one commentator called it a “crime of the mind. . . . You don’t have to do anything; you just have to think it.” Kevin Fedarko, The Imaginary Apocalypse: A U.S. Court Finds a Blind Muslim Cleric and Nine of His Followers Guilty of “Seditious Conspiracy” to Conduct a Bombing Spree Throughout New York City, Time, Oct. 16, 1995.

And what about “levying war?” Where does that come into this crime? Well, it seems that when § 2384 says “war” it doesn’t really mean “war.” In U.S. v. Rodriguez, 803 F.3d 381 (U.S. Court of Appeals for the 7th Circuit 1986), a defendant claimed § 2384 was unconstitutional because it violated the Treason Clause of the U.S. Constitution by not requiring (i) an overt act in furtherance of the conspiracy and (ii) the testimony of two witnesses as to the commission of the overt act. The Seventh Circuit said the Treason Clause didn’t apply because seditious conspiracy isn’t a treason provision:

Section 2384 has no requirement of the duty of loyalty, fidelity or allegiance to the United States. Unlike treason, seditious conspiracy does not. . . . contemplate the presence of an enemy foreign state or an actual war. . . .

That, finally, brings me back to the cyber-issues to which this blog is devoted. I can’t find a prosecution in which a charge of seditious conspiracy was predicated on the use of the Internet (including email, Twitter, etc.), but given the nature of the crime it seems such a charge is likely. A law review article recently noted that “use of the Internet has unique qualities that would likely provide the evidence” of intent to commit seditious conspiracy.” Elizabeth M. Renieris, Combating Incitement to Terrorism on the Internet, 11 Vanderbilt Journal of Entertainment and Technology Law 673 (2009). The conspiracy charge against the Hutarees does, for example, include allegations that 1 member used the Internet to research Improvised Explosive Devices and emailed that information to someone he thought could create such devices. And the Hutarees had their own website, which probably helped facilitate what they were doing. Most of the allegations, though, seem to involve actual activity in the physical world, probably because they tie into the substance of the allegations used to support the other, non-conspiracy charges.

Am I coming out in favor of “urban terrorism” and seditious conspiracy? Of course not. I do, though, find it disconcerting that a crime for which you can be sentenced to serve 20 years in prison could be based on nothing more than Internet chatter.