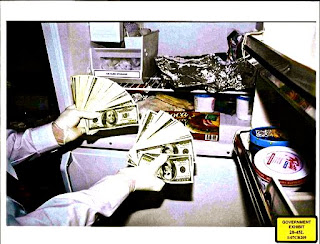 The issue arose in U.S. v. Drummond, 2010 WL 1329059 (U.S. District Court for the Middle District of Pennsylvania). This is the factual context from which the issue arose:

On May 6, 2009, Rahseem Drummond was arrested while traveling as a passenger in a vehicle south of Harrisburg. On May 13, [he] was indicted on charges of possessing with intent to distribute cocaine and marijuana, using a communication facility in furtherance of drug trafficking, and conspiring to distribute cocaine and marijuana. On July 29, 2009, a Superseding Indictment was issued adding the charge of using interstate commerce in furtherance of drug trafficking. On July 30, 2009, [Drummond] moved to suppress evidence obtained at the time of the arrest, but the motion was denied by the Court.

On February 4, 2010, [Drummond] filed this motion in limine to preclude introduction of prejudicial evidence at trial. Specifically, [he] learned through discovery provided by the Government that the Government intends to present photographs from [his] MySpace page at trial. . . . [Drummond] argues that the photographs . . . should be precluded from trial under [the] Federal Rules of Evidence. . . .

Before we get to the evidentiary issues Drummond raised, I need to explain what kind of motion Drummond filed and how it differs from a motion to suppress.

As you probably know, a motion to suppress asks a judge to exclude certain evidence from being presented at trial. As Wikipedia explains,

[T]he term `motion to suppress’ typically encompasses motions in criminal cases where the proposed basis for exclusion arises from the United States Constitution, a state constitution or a specific statute permitting the exclusion of certain types of evidence. . . .

As Wikipedia also notes, a motion “to exclude evidence where the . . . basis for exclusion arises from the rules of evidence is . . . a motion in limine.” Wikipedia explains that the phrase “in limine” is Latin for “at the threshold” and that a motion in limine is “made before the start of a trial requesting that the judge rule that certain evidence may, or may not, be introduced to the jury in a trial.” Since Drummond wasn’t claiming that the government obtained the MySpace photos by violating the 4th Amendment or some other constitutional provision, he filed a motion in limine.

In ruling on Drummond’s motion, the court noted that the photos in question depicted

[Drummond] counting, showing-off, and throwing large wads of cash while wearing a hat and sunglasses. It is unclear from the photos the amount of money in [his] possession or the way in which he obtained the bills. Additionally, one photo depicts [Drummond] either pretending to point a gun at the camera or pointing a gun at the camera. The Court's copy of the latter precludes the Court from discerning whether any weapon actually is shown in the photograph.

are not probative of any of the crimes charged. Alternatively, [he] argues that the probative value of the photos is substantially outweighed by the danger of unfair prejudice. By contrast, the Government maintains that testimony will demonstrate that [Drummond] had no job at the time the photographs were taken and thus no known means of income. From this, the Government argues, it is logical to infer that [he] obtained the cash from drug sales. The Government asserts that the photos of [Drummond] holding cash are circumstantial evidence of drug trafficking. Likewise, with respect to the photo of [him] pointing a gun, the Government contends that his possession of firearms is `intrinsic’ to the crime of conspiring to distribute drugs, and thus all evidence related to possession of a firearm is necessarily admissible as direct evidence of the crime charged.

Drummond’s first argument – that the photos weren’t probative of the crimes charged – was made under Rule 402 of the Federal Rules of Evidence. It provides as follows:

All relevant evidence is admissible, except as otherwise provided by the Constitution of the United States, by Act of Congress, by these rules, or by other rules prescribed by the Supreme Court pursuant to statutory authority. Evidence which is not relevant is not admissible.

The federal judge to whom the Drummond case is assigned found that the photos of Drummond “holding cash are relevant” because the “[p]ossession of large amounts of cash on-hand can be circumstantial evidence of drug trafficking.” U.S. v. Drummond, supra. That disposed of the Rule 402 issue.

The judge also found, however, that the photos are “without question . . . prejudicial to” Drummond. U.S. v. Drummond, supra. The existence of prejudice required the judge to decide if Rule 403 of the Federal Rules of Evidence barred the government from using the photos. Rule 403 provides as follows:

Although relevant, evidence may be excluded if its probative value is substantially outweighed by the danger of unfair prejudice, confusion of the issues, or misleading the jury, or by considerations of undue delay, waste of time, or needless presentation of cumulative evidence.

pose a significant risk of provoking an emotional reaction from the jury -- that he is a drug dealer because he looks like a drug dealer in the photos --, which is likely to outweigh the probative value of him possessing an unknown amount of cash from an unknown source. See Federal Rules of Evidence, advisory committee's note (defining unfair prejudice as `an undue tendency to suggest decision on an improper basis, commonly, though not necessarily, an emotional one.’). Moreover, evidence that [Drummond] possessed large quantities of cash despite his absence of a job or known source of income is, in all likelihood, capable of being presented through oral testimony much less prejudicial than these photos, making the prejudice of these photos avoidable.

U.S. v. Drummond, supra. She ultimately found, though, that she could not

at this point, make a determination as to whether the photos are admissible under Rule 403, in advance of knowing what exactly the testimony will reveal at trial. See In re Paoli Ry. PCB Litigation, 916 F.2d 829, 859 (U.S. Court of Appeals for the 3d Circuit 1990) (`We believe Rule 403 is a trial-oriented rule.’). The Court notes only that, if testimony presents evidence that [Drummond] had no known source of income and yet often had significant quantities of cash on-hand, but [he] disputes having possessed large amounts cash, it is possible that the relevance of the photos could outweigh any unfair prejudice.

The federal judge then found that “the same issues” applied to the photograph in which Drummond “is posing as if pointing a gun”. U.S. v. Drummond, supra.

As the Government suggests, possession of a firearm may be relevant to a charge of drug trafficking because firearms are known to be “tools of the trade” of drug trafficking. . . . However, the Government has not stated that testimony in this case will support the assertion that [Drummond] or the members of his conspiracy used firearms in furtherance of their drug-trafficking endeavors. Therefore, it is unclear to the Court that, in this case, possession of a firearm is intrinsic to the drug trafficking or conspiracy charged. . . . More importantly, the photograph is problematic because the Court cannot determine from the photocopy provided whether [Drummond] actually is possessing a firearm, or whether he is simply mimicking the stance of a shooter. Thus the Court cannot make a final determination on the admissibility of this photograph without more information.

I decided to do a post on this case because it’s the only reported case I can find that addresses the admissibility of photographs posted on someone’s MySpace page. I suspect the issues raised here will come up again in future cases.

Posted by Susan Brenner at 5:06 PM