Shredder Programs and Obstruction of Justice 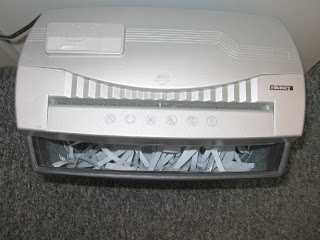 This is a follow-up to a post I did a couple of years ago, that dealt with using a forthwith grand jury subpoena to obtain computer hardware and other digital evidence. I used a federal case from Connecticut to illustrate how forthwith subpoenas work in this context.

This post is about what happened to the man whose (alleged) conduct was the impetus for the forthwith subpoena: Charles Spadoni. On January 9, 2001, a federal grand jury indicted him on charges of racketeering, conspiracy, bribery, wire fraud and obstruction of justice. U.S. v. Triumph Capital Group, Inc., 544 F.3d 149 (U.S. Court of Appeals for the Second Circuit 2008). He was convicted and appealed, claiming the evidence was Insufficient to prove certain elements of the crimes and the government “suppressed material exculpatory and impeaching evidence.” U.S. v. Triumph Capital, supra.

The Court said it wasn’t enough that Aguilar knew a grand jury was investigating matters related to the false statements he gave; to convict him, the government had to prove he knew the agents were working for the grand jury and his statements would be given to the grand jury. The Court said that absent such knowledge, Aguilar simply lied to federal agents, which does not constitute obstruction of justice. It explained that obstruction of justice under § 1503 requires a nexus between false statements or other acts and a “judicial proceeding;” a grand jury investigation is a judicial proceeding, but talking to federal agents is not. U.S. v. Aguilar, supra.

Spadoni argues that his conduct was directly analogous to Aguilar's. Destroying a document does not in fact affect a grand jury proceeding if the grand jury never requests the document. While Spadoni deleted several documents from his company laptop, at no time did he delete a document for which there was an outstanding subpoena. Just as there was insufficient evidence to prove that Aguilar knew his false statements would later be communicated to the grand . . . , so, goes the argument, there is insufficient evidence to prove that Spadoni knew the documents he deleted would later be, or were likely later to be, requested by the grand jury.

U.S. v. Triumph Capital, supra. The Court of Appeals did not agree. It found, first, that his

18 USC 1503(a) only "influence, obstruct, or impede" clause is about threatening letters. I'd love to see the law that makes it a crime to destroy your own documents before they have been requested by a grand jury.