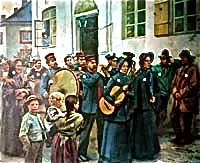 This post is about an evidentiary issue that arose in U.S. v. Stephens, 2009 WL 1608845 (U.S. Court of Appeals for the 5th Circuit 2009). Here, according to the Court of Appeals, is how brothers Bartholomew Stephens and Steven Stephens came to be prosecuted:

[I]n the wake of Hurricane Katrina, Steven registered a website: www. salvation army online. org The website was patterned after the official Salvation Army website and claimed to be the website of the organization's international headquarters. A donation link was created on the website, through which people could contribute money into PayPal accounts created in the names and identification numbers of individuals other than Steven or Bartholomew but linked to the brothers' bank accounts. Donations were made, and the brothers profited. Eventually, the FBI learned of the suspect Salvation Army site and obtained a search warrant for an apartment the brothers shared with another individual. The FBI executed the warrant and recovered a trove of incriminating evidence regarding each defendant.

Approximately one month after the bogus Salvation Army website was registered, the domain www.redcross-usa.org, purporting to be part of the Red Cross, was registered using the name Beis Stephens, as well as Bartholomew's e-mail address, mailing address, and credit card information. A laptop recovered from the brothers' apartment contained a picture of Bartholomew wearing a shirt that read `BEIS LETHAL INC.’ This laptop also contained the www. salvation army online. org web page and search results for the Salvation Army that listed www. salvation army online. org as the first `hit.’ One of these searches appeared in a subfolder entitled `BJ Stephens.’

Evidence of other crimes, wrongs, or acts is not admissible to prove the character of a person in order to show action in conformity therewith. It may, however, be admissible for other purposes, such as proof of motive, opportunity, intent, preparation, plan, knowledge, identity, or absence of mistake or accident. . . .

specialized but important application of the general rule excluding circumstantial use of character evidence. Consistently with that rule, evidence of other crimes, wrongs, or acts is not admissible to prove character as a basis for suggesting the inference that conduct on a particular occasion was in conformity with it. However, the evidence may be offered for another purpose, such as proof of motive, opportunity, and so on, which does not fall within the prohibition. In this situation the rule does not require that the evidence be excluded. . . . The determination must be made whether the danger of undue prejudice outweighs the probative value of the evidence in view of the availability of other means of proof and other facts appropriate for making decision of this kind. . . .

There was ample non-Red Cross evidence supporting the jury's verdict. Though the defendants emphasize the number of references made to the Red Cross website by the Government, this does nothing to undermine the overwhelming evidence that exists regarding the Salvation Army web site scheme, nor the fact that the jury was instructed to use the extrinsic evidence to ascertain the brothers' mental state. . . . Furthermore, even assuming that the district court erred in admitting the evidence of the Red Cross website, neither defendant has demonstrated that such evidence affected his substantial rights. We cannot conclude that the district court committed plain error when it admitted evidence regarding the Red Cross website.

Posted by Susan Brenner at 6:27 AM