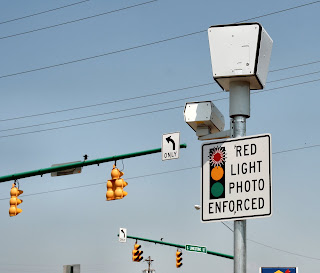 Goldsmith made three arguments on appeal, only two of which we’re concerned with. Both of these issues, as I’ll explain in more detail in a moment, involved challenges to the admissibility of the computer-generated evidence that was used to convict her of the charge. People v. Goldsmith, supra. The third argument went to whether the red light camera that generated the evidence was operating properly. People v. Goldsmith, supra.

In addition to the evidence generated by the ATES system, the prosecution also introduced the testimony of Dean Young, an investigator with the Inglewood Police Department. People v. Goldsmith, supra. Young testified, in part, that ATES is a

computer-based digital imaging system which photographs drivers who enter the intersection after the traffic signal has turned red or who fail to stop for a red light before turning right. When its sensors detect a vehicle in the intersection in the red light phase, the ATES is programmed to obtain three digital photographs and a 12–second video.

Once triggered, the ATES operates independently and stores information on the hard disc of a computer at the scene. Redflex technicians retrieve that computerized information through an internet connection. A police officer reviews all photographs before a citation is printed or mailed.

The opinion explains that the data bar

Her first argument on appeal was that the trial judge should have “excluded the video, photographs, and data imprinted on the photographs because there was no evidence presented to support a finding that the computer was operating properly.” People v. Goldsmith, supra. In other words, she argued that these items should not have been admitted into evidence because they had not been “authenticated” as is required by the rules of evidence in California (and, as I’ve noted in earlier posts, in other states and the federal system).

The Court of Appeals began its analysis of Goldsmith’s first argument by explaining that under California law, a writing must be authenticated

presumption that printed representations of computer information and of images stored on a video or digital medium are accurate representations of the computer information and images they purport to represent. Thus the images and information (including the date, time, and location of the violation and how long the light had been red when each photograph was taken) imprinted on the photographs are presumed to accurately represent the digital data in the computer. Goldsmith produced no evidence that would support a finding of the nonexistence of this presumed fact. Therefore the trier of fact was required to assume the existence of the presumed fact.

People v. Goldsmith, supra. For the last proposition – that the trial judge was required to assume the existence of the presumed fact – the court cited California Evidence Code § 604, which states, in part, that the effect of a presumption

The Court of Appeals also pointed out, though, that presumptions operate only to

establish that a printed representation accurately reflects data in the computer. . . . With regard to the accuracy and reliability of that digital data in the computer itself (as distinct from printed representations of that digital data), the California Supreme Court has determined that the admission of computer records does not require foundational testimony showing their accuracy and reliability.

The issue in People v. Martinez (2000) 22 Cal.4th 106 was whether a computerized record of criminal history information was admissible under the official records exception to the hearsay rule . . . , specifically whether the sources of information and method and time of preparation of such a computer record were such as to indicate its trustworthiness. . . . The California Supreme Court stated that `our courts have refused to require, as a prerequisite to admission of computer records, testimony on the “acceptability, accuracy, maintenance, and reliability of . . . computer hardware and software.”’. . . Moreover, where errors and mistakes occur, they could be developed on cross-examination and should not affect the admissibility of the computer record itself.

The Martinez court relied on an earlier decision of the California Court of Appeals: People v. Lugashi, 205 Cal. App.3d 632, 252 Cal. Rptr. 434 (2005). As the Goldsmith opinion notes, the Lugashi court rejected a test proposed by a defendant that would have required the proponent – here, the prosecution – of computer evidence to introduce

testimony on the reliability and acceptability of hardware, software, and internal maintenance and accuracy checks as a prerequisite to admission of that computer data. Lugashi stated that other California courts . . . had previously rejected similar claims, as had a majority of other state courts and some federal courts. . . .

Lugashi stated that the defendant's proposed test incorrectly presumed computer data to be unreliable and would require its proponent to disprove the possibility of error in order to meet the minimal showing required for admission of the evidence. . . .

Lugashi particularly found this proposed presumption to be inapplicable where the records consisted of retrieval of computer-generated data rather than data stemming from manually input, human-generated data. . . . .

Goldsmith also claimed the “photographs, video, and data imprinted on them were hearsay” and should not have been admitted because the prosecution did not show that they fell within one of the exceptions to the default rule barring hearsay. People v. Goldsmith, supra. As I’ve explained in earlier posts, every U.S. state and the federal system has a rule of evidence that bars the introduction of hearsay unless it falls within one of a number of carefully crafted exceptions to the default rule barring its use.

The Court of Appeals found the photos and video were not hearsay. It noted that California Evidence Code § 1200(a) defines hearsay as “evidence of a statement that was made other than by a witness while testifying at the hearing and that is offered to prove the truth of the matter stated.” People v. Goldsmith, supra. Section 225 of the California Evidence Code defines a statement as “(a) oral or written verbal expression or (b) nonverbal conduct of a person intended by him as a substitute for oral or written verbal expression.” People v. Goldsmith, supra.

Finally, the Court of Appeals also held that the computer printed data on photographs

depicting Goldsmith's violation which gave the date, time, and location of the photographs, and how long the light was red at the time the . . . image was taken. This information was generated by a machine, not a person. The printed data on the photographs was not subject to cross-examination. It was therefore not a statement constituting hearsay.

They can't prove that the light was red. - How to win. That there was a red light is hearsay.