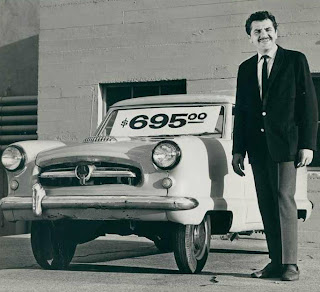 In 2010, Betty Barr was charged with and convicted of illegally accessing and aiding and abetting in the access of a government computer in violation of North Carolina General Statutes § 14-454.1(a)(2) and appealed. State v. Barr, __ S.E.2d __, 2012 WL 387867 (North Carolina Court of Appeals 2012). According to the opinion, Barr was “the owner and operator of Lexington License Plate Agency No. 29 (`Lexington Agency’). State v. Barr, supra.

The opinion explains that when a car dealer completes a vehicle sale, he or she has to

When a car dealer requests that a license plate agency transfer title of a vehicle, a title clerk checks the paperwork for accuracy and accesses a computer system called State Title and Registration System (`STARS’) by entering the title clerk's unique number called an RACF number, which is issued to the title clerk by DMV; the title clerk also enters a private entry code number that the title clerk creates as her password. STARS allows the title clerk to process the transfer of title, but only after the title clerk enters the relevant information for the transfer into STARS, including the car dealer's identification number. All North Carolina vehicles are titled and registered through STARS.

The opinion also explains that Randall K. Lanier was a car dealer who

owned Lanier Motor Company. For more than thirty-five years, Lanier had bought salvaged vehicles, repaired them, and sold them at Lanier Motor Company. In 2007, due to `tremendous financial losses’ affecting [his] credit, Lanier's bonding company refused to renew the company's bonds for 2008-2009. On 12 August 2008, Lanier's license, Lic. # 7736, was terminated. Lanier, however, continued to sell vehicles without a license.

According to “several” of the title clerks and Barr, the following happened on September 25, 2008:

Lanier went to the Lexington Agency to transfer title for two vehicle sales. [Barr] was not present. Lanier gave the paperwork to the clerk, Stokes. Stokes entered Lanier's dealer identification number into STARS, and the computer responded, `invalid dealer number.’ Stokes asked Granados how to resolve the issue. Granados typed `OS’ for the dealer number and told Stokes to continue.

`OS’ was an abbreviation for out-of-state. When Stokes asked Granados why she entered `OS[,]’ Granados [said] Lanier `was in the process of combining two lots or moving a lot to make his dealer number present. It was in the stage of being perfected by Raleigh, and that's what we were told to do.’

Stokes understood that Granados had called the DMV help desk to confirm that entering `OS’ was the proper procedure for Lanier Motor Company. Entering `OS’ for Lanier's transfers of title became the recognized procedure for the office. Several days [later], Lanier came to the Agency to transfer title for another vehicle. [Barr] entered [his] dealer number into STARS, and the system indicated Lanier was an inactive dealer, which means the dealer has not renewed his dealer license.

I’m assuming they did the same thing for Lanier with this transfer, because the opinion says Barr had instructed Granados (and maybe other clerks?) to “enter `OS’ for Lanier Motor Company's transfers.” State v. Barr, supra. The opinion says Barr was “directly involved in only three transfers” and “earned $59 in fees for the sixteen [Lanier] title transfers.” State v. Barr, supra.

As I noted above, Barr was charged with and convicted of violating North Carolina General Statutes § 14-454.1(a)(2), which makes it a crime to “access or cause to be accessed any government computer for the purpose of . . . [o]btaining property or services.”. Barr’s first argument on appeal was that her conviction should be reversed because the prosecution did not prove beyond a reasonable doubt that she “accessed a government computer `for the purpose of obtaining services”. State v. Barr, supra.

The Court of Appeals disagreed:

We believe the foregoing evidence is substantial evidence to support the element of `[o]btaining . . . services’ pursuant to § 14-454.1(a)(1). . . . [Barr] had `computer time’ on STARS; [she] also accessed `information or data stored in connection with’ STARS. We therefore conclude the trial court did not err by denying [her] motion to dismiss on the basis that there was not substantial evidence that [she] `[o]btain[ed] . . . services’.

Barr’s second argument was that the prosecution did not prove she acted “willfully” as required by § 14-454.1(a)(1). State v. Barr, supra. The Court of Appeals began its analysis of this argument by noting that “`[w]ilful as used in criminal statutes means the wrongful doing of an act without justification or excuse, or the commission of an act purposely and deliberately in violation of law.’” State v. Barr, supra (quoting State v. Williams, 284 N.C. 67, 199 S.E.2d 409 (North Carolina Supreme Court 1973)).

foregoing assertions by [Barr] -- in particular, the testimony of Stokes and [Barr] -- there is also evidence to the contrary -- Granados' testimony. When asked, `did you ever call the Department of Motor Vehicle Division in Raleigh to receive any information or assistance regarding that particular issue?’ Granados responded, `No, sir.’

Q. Ma'am, I want to bring your attention to the date January 6, 2009. Did you have occasion to again process titles for Lanier Motor Company on that date?

Q. Could you indicate to the ladies and gentlemen of the jury how that came about and what, if anything, unusual took place?

A. I brought it to my work station. . . . [and] opened up the dealer packet and proceeded to see if I could do the work and it still said the dealer was inactive.

Q. Was the Betty Barr present in the office on that date and time?

Q. What conversation, if any, did you have with Betty Barr regarding the finding that you just learned on your computer as it relates to the Lanier Motor Company transfer?

A. I told her the dealer number was inactive. And she said to go ahead and process it as an OS and that when Raleigh received it they would see he had applied for his dealer . . . and would go ahead and send it through.

Q. Based upon your training and education and experience as a title clerk for the license plate agency, was that a proper protocol that you have learned or experienced as a clerk?

Q. How many transfers did you make for Lanier Motor Company on January 6, 2009, if any?

A. I recall about three pieces.

As I’ve noted in earlier posts, in criminal law aiding and abetting is a principle of vicarious liability, i.e., it allows A to be held liable for crimes B actually committed as long as A facilitated (abetted) the commission of those crimes. As Wikipedia notes, it’s also referred to as accomplice liability. So in these two counts, Barr is being charged with aiding and abetting two crimes – crimes that are created by a single criminal statute.

The Court of Appeals agreed with Barr on this issue:

Posted by Susan Brenner at 4:19 PM