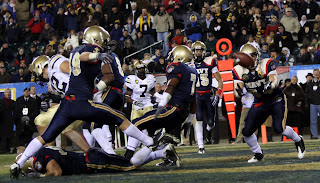 After being convicted, in a bench trial of possessing marijuana with the intent to distribute, Tyrone Davis appealed, raising a single issue: That Montgomery County Police violated a Maryland statute when they “`intercepted a phone call made by [Davis] in Virginia from a Virginia phone to a Virginia phone while the call’s recipient was in Virginia.’” Davis v. State, __ A.3d __, 2011 WL 2150350 (Maryland Court of Appeals 2011).

In its opinion, the Court of Appeals used a football analogy to put the issue into context:

Where was the interception? In football, a quarterback, standing on his own ten-yard line, may direct a pass to his wide receiver on the forty-yard line. An intervening defensive back, however, with probable cause to anticipate the pass, may leap up and pull the ball out of the air at the thirty-yard line. In the binary `either-or’ world of football, the interception precludes the reception.

In the multi-layered world of electronic surveillance, by contrast, the message may be received at its destination even as it is simultaneously intercepted in mid-flight. Our problem on this appeal is to pinpoint the legally significant spot at which an electro-magnetic transmission is effectively converted by the opposing team to its own use. Where, jurisdictionally, does the interception take place? At the ten-yard line, the thirty-yard line, the forty-yard line, or at all three places at once?

The “interception” of the phone call was made pursuant to an order Judge Harrington of the Circuit Court for Montgomery County signed on September 8, 2006, “authorizing officers of the Montgomery County Police Department, along with officers of the United States Drug Enforcement Administration” and “officers of `any other jurisdictions . . . working with and under the direction of’ the Montgomery County officers, to intercept pertinent outgoing and incoming calls on “cellular telephone 757–358–1554.” Davis v. State, supra. The order noted that, based on information provided to support the issuance of the order, the “`cellular telephone 757–358–1554 is known to be used in Montgomery County, Maryland and therefore . . . the applicants believe the events being investigated are occurring within the jurisdiction of Montgomery County, Maryland.” Davis v. State, supra (emphasis in the opinion).

Davis claimed that Judge Harrington did not have “jurisdictional authority” to issue the interception order targeting his cell phone because (i) he was in Virginia when he made the call, (ii) the recipient of the call was in Virginia and (iii) the call was made “`to a Virginia phone line.’” Davis v. State, supra. I don’t have access to the briefs in the case, but my impression is that Davis argued that the statute didn’t apply here because the call at issue was neither received in Maryland nor sent by a communication device that was physically in Maryland. Davis v. State, supra.

The Court of Appeals, however, did not see the issue as being that straightforward:

Davis claimed the phrase “communication device anywhere within the State” meant the phone itself must be in Maryland “at the precise moment of the interception.” Davis v. State, supra. After reviewing the evolution of the language in § 10-408(c)(3), the Court of Appeals explained that a 1991 amendment to that provision expanded a judge’s authority to order interceptions: Prior to the amendment, the judge issuing such an order could not issue an order authorizing an “intercept outside of the judge’s county”. Davis v. State, supra. The amendment expanded the provision to allow judges to issue an order “`authorizing the interception of communications sent or received by mobile telephone anywhere in the state regardless of where the mobile telephone is physically located at the time of interception regardless of the territorial jurisdiction of the court that issues the order.’” Davis v. State, supra (emphasis in original & quoting legislative history).

The Court of Appeals then explained that the amendment did not eliminate the need for a “jurisdictional anchor” to support interception orders: It merely shifted that anchor from the county as to which the judge had jurisdictional authority to “the situs of the crime.” Davis v. State, supra. As you can see from the quotation above, the last sentence of § 10-408(c)(3) says that the application for the interception order must allege that the crime under investigation “may transpire in the jurisdiction of the court” from which the intercept order is sought. Davis v. State, supra. After briefly reviewing the evidence in the case, the Court of Appeals concluded that

The Court of Appeals then took up the issue with which it began, “to wit, where does the interception of a cell phone conversation actually take place?” Davis v. State, supra. It explained that the

present case is a perfect illustration of why predicating the legality of an interception on the physical location of the cell phone itself would be exceedingly problematic. The only reason we know that the intercepted call now in issue, Call 27 on Line F, emanated from Virginia is because that fact slipped out, purely coincidentally, in the course of essentially extraneous chatter. But for that conversational happenstance, the call could have been from anywhere. In this case, the dialogue revealed, inferentially, that the appellant was in Virginia.

If jurisdiction to authorize an interception depended on such a gratuitous revelation, how long would it take an adaptive narcotics industry to instruct everyone of its cell phone users to announce or to suggest that the call then in progress was coming from Kansas City or from Katmandu? The location of the phone could be a tenuous thread on which to hang jurisdiction over the intercept.

would be unworkable. In the ethereal world of cellular technology, we must depend, for the lack of a feasible alternative, on the reassuring geographic stability of the police listening post. We may rely on it, unlike a cell phone, to stay where it is expected it to be.

It concluded the opinion by answering the

I'm glad the court decided on the relatively sane scheme of the interception happening at the police listening post. Can you imagine trying to apply the alternative to intercepting email or network traffic?