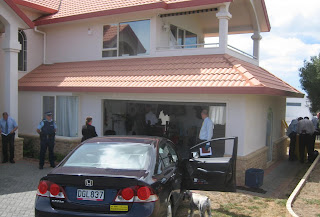 To obtain a warrant to search a place or thing (or a person), an officer submits an application for a search warrant. You can find the form used for this purpose in the federal system here.

As you can see from the form, the officer indicates the offense(s) which provide the legal basis for the search and will include a statement of the facts on which the application is based (a statement that usually continues, as the form notes, on attached pages). As you’ll also see from the form, in submitting the application the officer “state[s] under penalties of perjury” that he/she “has reason to believe” evidence of a crime will be found at/in the place/thing to be searched.

What happens if the officer lies in the warrant application? The Supreme Court addressed that issue in Franks v. Delaware, 438 U.S. 154 (1978). The Franks Court held that (i) if the defendant “makes a substantial preliminary showing that a false statement was included in the warrant application “intentionally, or with reckless disregard for the truth” and (ii) if the statement was necessary to the finding of probable cause that resulted in the issuance of the warrant, (iii) the court must hold an evidentiary hearing to determine whether the false information was intentionally or recklessly included and (iv) if at the defendant shows it was included recklessly or intentionally and was necessary to the finding of probable cause, then the “search warrant must be voided and the fruits of the search” excluded from evidence.

That brings us to U.S. v. Davis, 2011 WL 2119378 (U.S. District Court for the Eastern District of Washington 2011). Andrew Vaughn Davis was charged with possessing and receiving child pornography in violation of 18 U.S. Code § 2252A based on “evidence found during a search of his personal computer at his home pursuant to a state court search warrant.” U.S. v. Davis, supra.

After being indicted, Davis moved to suppress the evidence obtained from his computer, arguing that the warrant was obtained in violation of the 4th Amendment because the

applying officer deliberately or recklessly failed to disclose to the issuing state Superior Court judge that the minor, referred to as G.T., who had allegedly had sexual contact with the Defendant six months previously, had, inter alia, recently provided false information to law enforcement officers, including to the affiant herein and made a false claim to the officers of an alleged sexual assault by a fellow student.

U.S. v. Davis, supra. The district court judge who has the case held an evidentiary hearing on Davis’ claims, and then issued an opinion in which he states the “findings of fact” resulting from that hearing and the conclusions of law he derived from those facts. U.S. v. Davis, supra.

We’ll start with the facts. The officer who submitted the application (under penalties of perjury) was Stevens County Deputy Sheriff Iain Ashley, who became a deputy in 2002 and a detective in 2007. U.S. v. Davis, supra. The application he submitted contained “information incorporated in a City of Spokane police report stating that a female minor, [“GT”] who was 15 years old at the time, claimed she had consensual sexual intercourse with Davis some six months prior to the report.” U.S. v. Davis, supra.

Ashley did not interview GT but “relied on the police report of Officer Eckersley of” the Spokane Police Department; Eckersley spoke with GT and prepared a report that went to Ashley. U.S. v. Davis, supra. GT also gave Eckersley “some MySpace chat logs,” portions of which Ashley included in the warrant application; the judge noted there “was nothing in the chat logs that referred to pornography of any kind.” U.S. v. Davis, supra. He also noted that aside from the information provided by GT, the only other information included in the warrant application was that “Davis had two prior convictions: 1) 3rd Degree Rape (1998) and 2) 3rd Degree Rape of a Child (1998).” U.S. v. Davis, supra.

The judge also explained that Ashley had had previous law enforcement contact with GT,

none of which was revealed to the state court judge. . . . . Ashley's first interaction with GT occurred when she was 13 years old. . . . Ashley was a patrol deputy and responded to a call at the residence. [GT apparently called and complained about being disciplined “`by a parent for . . . something to do with using the computer.’] . . . Ashley determined it was a reasonable discipline issue, and there was no basis for criminal charges.

Ashley's next interaction with GT was on March 4, 2008 [when] she made an allegation of a sexual assault of her by a 15 year-old boy [Cody Little], [whom she claimed had] GT pinned her to the wall in the school hallway, kissed her, tried to stick his hands down her pants, and threatened her not to tell anyone. . . . Ashley's report . . . also recounted a conversation he had with GT's mother: `She also told me that she had been having trouble with GT and brought up a past call our office had handled at the house in which GT reported an assault that was unfounded. She also advised that GT had described a similar event to the one I was investigating but stated that it had allegedly occurred when GT was 13 years old.’

On March 6, 2008, GT recanted her allegations against Cody. . . . Ashley was aware GT had recanted her allegations against Cody and that the allegations were false. . . . Ashley discussed [the matter] with Cody's mother [who said Ashley told her] it was not the first time GT had done this sort of thing, and GT had mental and emotional problems. Ms. Little told Ashley she wanted charges brought against GT for the false accusations, but Ashley advised against such action.

Ashley did not disclose any of this information to the judge who issued the warrant to search Davis’ computer. U.S. v. Davis, supra. In his opinion, the judge notes that since the basis of Ashley’s application for the search warrant was the “alleged statements of GT, her credibility, or the lack thereof, was of critical import in an evaluation by a judge concerning whether probable cause existed for the issuance of a search warrant for” Davis’ computer. U.S. v. Davis, supra. The opinion also notes that the affidavit Ashley submitted in support of the warrant said that “sometime between May 15 and May 20, 2008” GT was at Davis’ house with his daughter and a “minor male” when she had sex with Davis. U.S. v. Davis, supra. Ashley’s statement indicated the sex was consensual but, as the opinion notes, “Davis’ actions, if true, would have been criminal, given GT’s age.” U.S. v. Davis, supra.

According to the opinion, though Ashley knew “of GT’s credibility issues” and prior false report of a sexual assault, he did not present this information to the judge from whom he sought the warrant, did not “take steps to corroborate GT’s story”, did not contact Eckersley to discuss his interactions with GT and did not contact the others who were “allegedly at the house the house on the night Davis and GT had sex.” U.S. v. Davis, supra. He also did not report a “prior `unfounded’” allegation she made against her father or that she had been arrested for assaulting her mother. U.S. v. Davis, supra.

Now, the conclusions of law. Davis, of course, was making a Franks argument, but the Franks case involved affirmatively false statements . . . which, of course, was not true here. The deliberate act the judge attributed to Ashley was an act of omission – not an act of deliberate falsification. He noted, though, that the U.S. Court of Appeals for the 9th Circuit (whose precedents bind this federal court) has extended the Franks holding to encompass omissions, as well as deliberate false statements. U.S. v. Davis, supra.

The district court judge also found that while Davis’ criminal history “was probative”, that “history alone would not support a finding of probable cause.” U.S. v. Davis, supra. He also noted that the convictions were “10 years old at the time of the warrant application” and that courts have found that “stale” convictions are only “marginally relevant” in determining probable cause. U.S. v. Davis, supra.

That left GT’s statements. The district court judge explained that “[i]f the Superior Court judge had been informed that GT had recently made a false allegation of sexual assault and previously made an `unfounded’ allegation against her father concerning parental discipline, the judge would have likely afforded her statement little weight.” U.S. v. Davis, supra. He held, therefore that “had the issuing state court judge been truthfully provided with the omitted information about GT, the judge would not have issued the warrant without requiring Ashley to conduct further investigation and obtain corroborating information.” U.S. v. Davis, supra.

The judge therefore granted Davis’ motion to suppress the evidence obtained from his computer. U.S. v. Davis, supra. In so doing, he noted that the “protections of the Fourth Amendment are not lessened based on the nature of the crime investigated.” U.S. v. Davis, supra.