Alibi, Exculpatory Evidence and the Motion in Limine 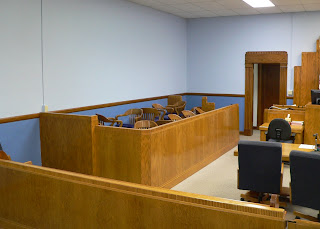 Based on information that [William] Reed, a student at South Dakota State University, was using a chat and file-sharing program to download and share child pornography, federal agents conducted a warrant search of Reed's residence on September 19, 2007.

The agents seized Reed's laptop computer, a USB storage device, and three hard drives. A forensic examination of the hard drives uncovered `thousands’ of chat transcripts, many of which involved sexually explicit topics and the transfer of images depicting child pornography.

demand for alibi. . . . After Reed filed a notice of alibi nearly three months later on October 15, 2009, the Government sought and obtained a superseding indictment on November 3, 2009, that kept three of the charges from the original indictment and added a count of possession of child pornography. . .

Appellee’s Brief, U.S. v. Reed, supra. (Rule 12.1 of the Federal Rules of Criminal Procedure, which you can find here, allows the government to file a written request for notice of “any intended alibi defense” and requires the defendant to respond in writing by identifying the nature of the alibi defense and identifying the alibi witness(es) on whom he or she intends to rely. According to the Advisory Committee that drafted the rule, it is intended “to prevent unfair surprise to the prosecution.”)

Why did the government obtain a superseding indictment that contained fewer, and slightly different, charges? According to the 8th Circuit’s opinion, Reed responded to the demand for alibi “with evidence tending to show that various roommates had access to his computer and that he was out of town when some of the nine chats took place”. U.S. v. Reed, supra. And according to a brief filed on his behalf, the “defense strategy was to show that another person was using his computer at times when child pornography was downloaded to it”. Reply Brief of Appellant, U.S. v. Reed, 2010 WL 4852494. At trial, Reed testified that

Reed filed a notice of second alibi on January 26, 2010, a week before trial. Without offering the identity of any witnesses, this second notice merely stated that Reed was not in South Dakota at the time of the charged offenses. In response, the Government filed a motion in limine to exclude `any reference to the fact that 9 counts of receipt and distribution of child pornography were charged in an Indictment issued January 8, 2008, and that 6 of those counts are not present in a Superseding Indictment issued November 3, 2009.’

As Wikipedia notes, a motion in limine “asks the court to decide that certain evidence may or may not be presented to the jury at the trial.” Wikipedia explains that such motions usually address “issues which would be prejudicial for the jury to hear in open court, even if the other side makes a timely objection which is sustained, and the judge instructs the jury to disregard the evidence.”

According to the opinion, the government filed the motion in limine “[o]n the eve of trial”, which prompted Reed’s defense attorney to object that

cross-examining the government's witnesses about the six dropped counts would support Reed's defense that other persons with access to his computer had downloaded and shared all the child pornography. The prosecutor responded that it was `probably fair’ to allow Reed to offer other chats to show `it [was] not him,’ but that evidence as to the government's charging decisions was not `fair game.’ The district court granted the motion in limine but stated that Reed was not prevented `from attempting to show that others at various times used his computer.’

On appeal, Reed argued that the district court judge’s abuse of discretion allowed the

Government to circumvent Brady's intent. If the Government is correct in its arguments, it would be possible for any future prosecutor to withhold potentially exculpatory evidence, not through the discovery process, but through its power to issue Superseding Indictments. Without denying the Government's ability to drop charges for which it does not believe it can obtain a conviction, the Court must still allow potentially exculpatory evidence to be admissible at trial.

The prosecution argued, in response, that the district court was

well within its discretion to preclude the Government's charging decisions from coming before the jury. Preventing the introduction of charging decisions as evidence avoided a mini-trial on issues not relevant to the charges in the superseding indictment. Additionally, the district court . . . avoided the possibility of misleading the jury into thinking [Reed] was innocent of the charges not included in the superseding indictment.

Not surprisingly, the Court of Appeals agreed with the prosecution. It began by rejecting Reed’s argument that the district court judge’s ruling “essentially withdrew evidence, . . . `which resulted in a situation identical to one where the Government suppressed the evidence in the first instance.’” U.S. v. Reed, supra. The Court of Appeals found that

[t]his contention is without merit. Reed concedes that the government permitted his attorney to view all seized `images and their associated dates through the discovery process.’ Brady addressed only the government's duty to provide access to evidence favorable to an accused upon request. It does not require a prosecutor to retain or pursue criminal charges to which the defendant has an alibi so that the defendant can refute those charges at trial.

The court also noted that several of the U.S. circuits “have unanimously upheld the exclusion of evidence of prior charging decisions on the ground that many factors unrelated to guilt may influence those decisions and their admission therefore risks misleading the jury and confusing the issues.” U.S. v. Reed, supra. The Court of Appeals seems to have agreed with the prosecution, which pointed out that because “[p]rosecutors maintain a great deal of discretion in making charging decisions”, those decisions “are not issues for a jury to decide.” Appellee’s Brief, U.S. v. Reed, supra.

It seems to me that the real basis of the district court judge’s ruling on the motion in limine and the Court of Appeals’ decision to uphold that ruling is that the decision is inherently ambiguous. The prosecutors presumably dropped those six charges either because (i) they thought it would be too difficult to prove Reed was responsible for the child pornography that was received/distributed on the dates at issue in those counts or (ii) they thought he probably wasn’t responsible for the child pornography that was received and/or distributed on those dates.

As I understand it, Reed wanted to use the withdrawal of those six counts to support the inference that (i) he wasn’t guilty of the conduct at issue in those counts and (ii) or of the conduct at issue in the counts in the superseding indictment. As I see it, neither of the alternatives set out above in the paragraph above can support either inference.

The fact that it would be difficult to prove someone’s guilt beyond a reasonable doubt cannot, IMHO, reasonably support the inference that the person is not guilty. Like the prosecutors, I don’t see this circumstance as having evidentiary relevance either to guilt or innocence. And the (assumed for the purposes of analysis) fact that the prosecutors thought Reed probably wasn’t responsible for the child pornography that provided the basis of the withdrawn counts cannot support the inference that he was, in fact, not guilty of that conduct or that he was not guilty of the entirely different conduct that provided the factual basis for the counts in the superseding indictment.

A prosecutor’s opinion about a case is not evidence that can be admitted at trial; if it were, then I assume prosecutors could submit sworn affidavits attesting to their strong opinions as to a defendant’s guilt and ask to have the affidavits submitted to the jury as evidence for their consideration.

Why would a defendant ever obey a court's motion in limine? I'd be hollering about that stuff if I was on trial.

If you first accuse me of doing 50 different things, but then back off and only accuse me of 20 things, why couldn't I use that as evidence that you did a sloppy investigation or a rush to judgment?