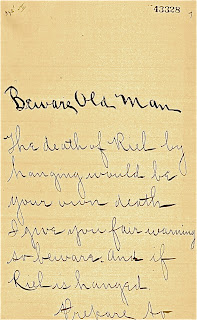 This post is about a recent opinion that addressed an issue involving “threats,” i.e., whether one accused of “threatening” another must have communicated the threat directly to the presumed victim.

As I’ve noted in earlier posts, the usual dynamic of a threat crime is that the perpetrator (the “threatener”) directly transmits the threat to the victim (the “threatened”). That’s been an essential, if implicit, element of the crime, and it’s one of the reasons criminal law can criminalize threats without violating the 1st Amendment. A threat is, after all, speech, which means it’s protected by the 1stAmendment unless some circumstance deprives it of that protection.

As I've also noted, courts historically held that threats could be criminalized under either or both of two rationales: One is that a threat causes emotional “harm” to the victim, which is usually what the threatener intends to do. The premise here is that unlike regular speech – which can offend us or make us uncomfortable -- a threat inflicts an aggravated level of emotional “harm” which justifies criminalizing the act of making a threat.

The other rationale is that a threat can be seen as an initial step toward carrying out the threatened act of killing or injuring another person or persons. The premise here is that by making a “true threat,” you’ve shown that you’re dangerous, so the law can intervene to prevent you from carrying out what you have, in effect, promised to do.

That brings us to Holcomb v. Commonwealth, __ S.E.2d __, 2011 WL 2183100 (Virginia Court of Appeals 2011). John Andrew-Collins Holcomb and Miranda Rollman” were “involved in a romantic relationship that produced a daughter. After the relationship dissolved, a custody battle ensued over their child.” Holcomb v. Commonwealth, supra. During the battle, Holcomb “began posting incendiary messages on his MySpace profile,” two of which were as follows:

One of the blog entries -- titled `Unfinished Bizness God, I Give You the “woodroll” family. Tell them to “F the F OFF” and “GET OFF ME,’” -- read:

With no vest, off'd with 2 shots

Thru the chest from 2 blocks!

Bitch made me go mad I just had to stab her

On the front cover of The World's Most Murdered Mothers

By Americas Most Wanted Fathers’


The post continued, `Ain't nobody playin' bitch[,] slit your neck into a fountain drink,’ `This is your pre-accident announcing[.] Fuck your fliers[,] I already put the word out for the crowd 2 see[,]’ `No one hearing your screams from the knife cut sounds,’ and `See you with my daughter I'm a snatch her.’ A final post dated August 24, 2009, read:


This entry concluded with, `Still labeled psychotic just in case you're not worried; murder makes me happy so don't believe I'm nervous.’

Holcomb was arrested and charged with “knowingly communicating a written threat” in violation of Virginia Code § 18.2-60(A)(1), which provides as follows:

Any person who knowingly communicates, in a writing, including an electronically transmitted communication producing a visual or electronic message, a threat to kill or do bodily injury to a person, regarding that person or any member of his family, and the threat places such person in reasonable apprehension of death or bodily injury to himself or his family member, is guilty of a Class 6 felony.

After a bench trial, Holcomb was convicted, the judge having found that the “ongoing custody dispute involving his daughter created a `connection or [a] nexus’ between his posts and Rollman's `individual situation’ such that the posts constituted `very veiled threats.’” Holcomb v. Commonwealth, supra. Holcomb appealed, arguing that the

evidence fails to establish that he knowingly communicated the posts within the meaning of the statute.[Holcomb] suggests that because his chosen medium was `available for everyone to view’ on a public website and he did not specifically send the posts to Rollman or direct her to view his posts, he cannot be convicted.

So Holcomb relied on the issue I noted earlier, i.e., that historically a “threat” has been communicated directly from the threatener to the victim. The Court of Appeals began its analysis of his argument by noting that in 1998, the

[Virginia] General Assembly amended Code § 18.2-60 to criminalize threats contained in `electronically transmitted communication[s] producing a visual or electronic message.’ 1998 Va. Acts ch. 687. Section 18.2-60(A)(1) contains no requirement that the accused must communicate the written threat directly to the intended victim. Instead, `[p]roof that [the accused] intended to make and communicate the [alleged] threat and that [it] was made and communicated satisfies the statutory requirement.’ Summerlin v. Commonwealth, 37 Va. App. 288, 557 S.E.2d 731 (2002). The statute is concerned with neither the mode of communication nor the number of recipients of the alleged threatening communication.

The Court of Appeals also noted that in interpreting the federal threats statute – 18 U.S. Code § 875(c) (which I’ve discussed in earlier posts) – the U.S. Court of Appeals for the 2d Circuit rejected a similar argument that the

`broadcast of the threat to an indefinite and unknown audience is not a ‘communication’ of that threat.’ U.S. v. Kelner, 534 F.2d 1020 (1976). The court reasoned that if this argument were taken to its logical conclusion, `any would-be threatener could avoid the statute by seeking the widest possible means of disseminating his threat.’ Id. Rather, the proper inquiry was whether the accused `intended to communicate a threat of injury through means reasonably adapted to that purpose.’ Id.

plainly falls into the category of an `electronically transmitted communication’ because it produces a `visual or electronic message’ that can be viewed by anyone who has access to that person's MySpace profile. In fact, the Commonwealth was readily able to print out the posts from appellant's MySpace profile and enter them into evidence at his trial. [Holcomb] concedes that he knowingly posted the messages on his MySpace profile. If these messages constituted threats, then nothing more is required.

The Court of Appeals therefore found that it was of

no consequence that [Holcomb] did not direct Rollman to view his MySpace profile. . . . [I]t is sufficient [he] made numerous references to his history with Rollman that allowed her to identify herself as the subject of the violent fantasies once she did view the profile. Further, [he] knew Rollman had access to his MySpace profile and had in fact viewed it in the past.

The fact Rollman lacked a personal computer from which she could access MySpace does not lessen the threatening nature of [Holcomb’s] posts because Rollman could, and did, just as easily access MySpace from her mother's computer. We thus conclude [his] posts on his MySpace profile are electronic communications capable, depending on their content, of constituting threats in violation of Code § 18.2-60.

Holcomb also argued that the content of the postings did not qualify as “threats,” noting that he “he previously used MySpace as a medium for posting other lyrics he composed, and has an established history of involvement with that particular style of music.” Holcomb v. Commonwealth, supra. The Court of Appeals again disagreed.

It found that the postings qualified as threats because while they might seem “somewhat innocuous” to the “casual observer,” “the specificity of the posts relating to [Holcomb’s] tumultuous history with Rollman and her family makes clear [they] were directed toward Rollman and were not meant to be mere expression.” Holcomb v. Commonwealth, supra. So the court is saying the posts qualified as threats under either or both of the theories noted above -- the “emotional harm” or “dangerousness” theories.

The Court of Appeals also found that the “graphic and violent imagery . . . in the posts further indicate[d] the threatening nature of the messages.” Holcomb v. Commonwealth, supra. It pointed out that when he testified at trial, Holcomb “acknowledged” that “`if [the posts] were reality . . . that would be very horrifying; and to think that I think it just to write it is -- you know, could just be as horrifying.’” Holcomb v. Commonwealth, supra.

Finally, the Court of Appeals considered Rollman’s reaction to the posts to “determine whether they placed here in `reasonable apprehension of death or bodily injury” as required by Virginia Code § 18.2-60(A)(1). Holcomb v. Commonwealth, supra. It found that they did, since Rollman moved into her “parents’ home to take advantage of their security system” and testified she was “`scared [she] was going to be killed [or] maimed’ and `her daughter was going to be kidnapped.’” Holcomb v. Commonwealth, supra.

No doubt these words can make one feel uncomfortable but no worst than what goes on in todays modern hip-hop music and tv sitcoms. Many, many songs we're written and everything they brought on the table was taken out of context and scrambled and put together to please the victim. As this is my opinion, so is the victims reaction to the postings. And since he can't be charged again for the same threats made, I took liberty in reposting his song. However, I felt it should be noted, the true form of the song is as follows:

" V.2 Say I'm sadistically twisted
Maybe satanistic
Or a bit disturbin
Whatever your preferrin
This is my discernment
The circumstance occurin
Still runnin with the hatchet
So ya better hurry
Still labeled psychopathic just
In case your not worried
Murder makes me happy
So don't believe I'm nervous
Til death do us part is why I feel you deserve this
Lets just recap this
The meds still not workin....

v.3 Room surrounded by candles all lit up with matches
My style's satanic
3 sixes can't match it
Vision way out there the aliens grasp it
Bitch if I were you I'd stay a fucking crack addict
Costed me a blessin
The cause of my depression
Never lettin go
Ya throat becomes my obsession
No joke, slit throats
Forever dead and never woke
Bitch don't get choked
Sit down ho don't prevoke
Never knew you could be so heartless
Prepare for holocaust
You lost up in the sauce
Let you walk but I'ma bang that ass regardless
Ice around the mic so my style remains flawless
Spit cycles thru ya chest leaving your heart frosted
Yeah! I fuckin lost it
Ventin bout some punk bitch off the meds detoxin
Bi-polar like polar bears leavin claws all across ya"