Claim for Damages Resulting From Seizure of Laptop . . . Fails 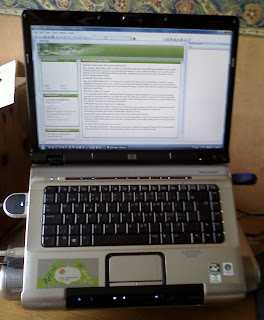 Unlike most of my posts, this one isn’t about a criminal case. It’s about a civil suit in which a man sought damages for the seizure of his laptop as he returned to the United States from a trip abroad.

[Kam-Almaz] alleges that Agent Moldowan stated the laptop would be seized for `no more than seven days. [He] also alleges that he received a document receipt on a Customs Form 6051D that stated `shipments may be detained for up to thirty (30) days, unless statutory authority of interagency agreement mandates that a longer period of time is required or the imports/exporter/subject requests a longer detention period through the Port Director.’

The Government withheld the laptop until June 21, 2006, some ten weeks. During this time, [Kam-Almaz] on several occasions repeated his request to copy the files on the computer. These requests were also denied. While in ICE custody, the computer crashed. This resulted in permanent damage to [Kam-Almaz’s] operating software, his data files, and the software warranty.

In the Complaint Kam-Almaz filed to initiate his civil suit, he claimed “the Government breached an implied-in-fact bailment contract or effected an uncompensated taking when it seized [his] business laptop computer and flash disks.” Kam-Almaz v.U.S. supra. He sought “damages for equipment and warranty costs; replacement hardware, software, and warranty; and lost contract costs totaling $469,480.00.” Kam-Almaz v.U.S. supra.

Before we go any further, I need to explain a bit about the court in which this case was filed. As Wikipedia explains, the “94 United States district courts are the general trial courts of the United States federal court system”, which is why the federal cases I write about in my posts always originated in a U.S. District Court. Claims against the government – e.g., claims for property damage or deprivations of property, claims for violation of civil rights, etc. – are therefore usually filed in a U.S. District Court.

This action, though, was not. It was filed in a federal court, but not a U.S. District Court. As I noted above, it was filed in the U.S. Court of Federal Claims, which is something very different. As Wikipedia explains, this United States federal court hears

monetary claims against the U.S. government. The court is established pursuant to Congress's authority under Article One of the United States Constitution. Unlike judges of courts established under Article Three of the United States Constitution, judges on the Court of Federal Claims do not have life tenure. . . . Instead they serve for 15-year terms and are eligible for reappointment.

As Wikipedia also explains, the Court of Federal Claims “has special jurisdiction,” as set out in 28 U.S. Code § 1491, “for money that arise from the United States Constitution, federal statutes, executive regulations, or an express or implied in fact contract with” the U.S. Government.

That brings us back to Kam-Almaz’s lawsuit. The government responded by filing a motion to dismiss the suit “for lack of jurisdiction and for failure to state a claim under which relief can be granted.” Kam-Almaz v.U.S. supra. The motion to dismiss was filed pursuant to Rule 12(b) of the Federal Rules of Civil Procedure, which you can find here. Motions under Rule 12(b) don’t go to the facts in a case; instead, they argue that the case should be dismissed for purely legal reasons. Under Rule 12(b)(1), a court’s lack of subject-matter jurisdiction requires that a suit be dismissed, and under Rule 12(b)(6), the motion makes the same argument on the theory that the complaint fails to state a legally cognizable cause of action.

We’ll start with the government’s argument that Kam-Almaz’s complaint failed to state a cognizable cause of action. As I noted above, he argued that the government was liable under either or both of two causes of action: an implied in fact bailment contract and a takings claim. We’ll analyze each, in order.

As Wikipedia explains, a bailment is a “legal relationship .. . . where physical possession of personal property . . . is transferred from one person (the 'bailor') to another person (the 'bailee')”. As I noted in an earlier post, the classic example of a bailment occurs when I check a bag with an airline: I give the airline possession of my bag while I’m flying on its plane(s), but I don’t give up ownership of it; I expect the airline to return it to me (intact) when I get off the plane at my destination.

In its motion to dismiss, the government apparently argued that Kam-Almaz’s complaint didn’t allege facts sufficient to support a cause of action for an implied in fact bailment, and the court agreed:

[Kam-Almaz] contends that both the oral promise to return the computer within seven days and the signed Customs Form 6051D stating that the computer would be returned within thirty days gave rise to an implied promise to use due care during the alleged bailment. However, these Government promises do not give rise to a bailment. First, the Complaint does not allege that [he] `deliver[ed] personalty’ to the Government. Rather, the property was seized. Second, the Complaint does not allege that the computer would be returned `in accordance with [Kam-Almaz’s] instructions.’

Moreover, there are no facts in the Complaint demonstrating an explicit promise that the goods would be guarded or carefully handled. . . . The `purely unilateral act’ of seizing a person's personal property does not evidence intent to enter into a bailment contract. . . . [T]he Complaint describes the Government's actions as a `seizure.’ The oral promise to return the computer in seven days and the Customs Form 6051D are not enough to overcome the unilateral nature of the transaction. . . .

[Kam-Almaz] involuntarily gave up his property because he did not have any choice but to accept the Government's actions; the Court cannot find the mutual intent necessary to form a contract.

In addition to these deficiencies, any one of which is fatal . . . , the Complaint lacks the necessary allegations of Agent Moldowan's authority to enter into a bailment contract.

That brings us to the takings claim, which was based on the 5th Amendment’s statement that private property cannot “be taken for public use without just compensation.” Claims under the Takings Clause of the 5th Amendment usually arise from the government’s use of its power of eminent domain, i.e., the power to take private property for public use. The Court of Federal Claims found that Kam-Almaz’s takings claim had to be dismissed for failure to state a cause of action because property seized and retained pursuant to

the police power is not taken for a `public use’ within the context of the takings clause. . . . The police power encompasses Customs' ability to seize and retain property if the officer has `reasonable cause to believe that any law or regulation enforced by Customs and Border Protection or Immigration and Customs Enforcement has been violated.’ 19 Code of Federal Regulations § 162.21.

[Kam-Almaz] argues that the laptop was not seized according to the police power but rather according to an `administrative border search for security purposes.’ However, agents do not have authority to seize property without having `reasonable cause to suspect a violation of law,’ and thus, cannot randomly seize property for general security purposes as [Kam-Almaz] argues occurred in this case. If property could be randomly seized without reasonable cause, [Kam-Almaz] might argue that such a seizure was for a `public use- -- to protect the general welfare. However, this argument must fail given the limit on seizure authority granted in 19 C.F.R. § 162 .21 and the lack of any facts in [his] Complaint demonstrating an administrative search and seizure.

If Agent Moldowan did not have `reasonable cause’ to believe a violation of the law occurred, the seizure would have been unlawful and unauthorized. First, this Court does not have jurisdiction to hear claims contesting the lawfulness of a . . . seizure because due process and Fourth Amendment claims are reserved to the District Court. Second, this Court only possesses jurisdiction to consider takings claims that arise `as the direct, natural, or probable result of an authorized activity’ by Government officials. Ridge Line, Inc. v. U.S., 346 F.3d 1346 (U.S. Court of Appeals for the Federal Circuit 2003) (emphasis added).

Finally, the Federal Court of Claims agreed with the government that it lacked jurisdiction to hear the case:

[E]ven if the Government's action was authorized and the taking was based on an `unreasonable delay’ in returning the property, [Kam-Almaz’s] claim must fail for lack of jurisdiction. Though an owner of property has a due process right to have the government either return seized property or initiate forfeiture proceedings, a claim of damages for delay in returning seized property is a due process claim that must be heard in District Court. See Arcadia Technology, Inc. v. U.S., 458 F.3d 1327 (U.S. Court of Appeals for the Federal Circuit 2006).

In Arcadia, Plaintiff argued that a seizure of its goods for four years was a compensable taking based on unreasonable delay. The Court disagreed. The Plaintiff could bring a due process claim for delay in District Court, but the Due Process Clause is not a money-mandating provision conferring jurisdiction on this Court.

The Federal Court of Claims therefore granted the government’s motion to dismiss Kam-Almaz’s complaint, which meant the civil suit ended. Kam-Almaz v. U.S., supra. It's not a judgment on the merits, which means he can try filing the suit, again, in a U.S. District Court, which would have jurisdiction over the due process claim; he'd have to address the problems noted in this opinion to revive his implied in fact bailment claim.