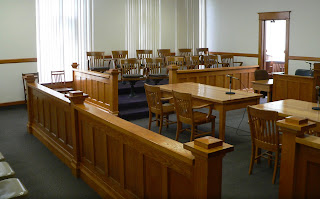 This post involves what might be juror misconduct, but it isn’t about juror misconduct, as such. It’s going to deal with an order a California federal judge recently issued in a civil suit that arose from a jury foreperson’s use of Facebook while he was serving on the jury.

The ex-jury foreperson filed the civil suit – for reasons we’ll come to in just a moment – and was allowed to use a pseudonym (“Juror Number One”) in doing so. That’s why the decision we’ll examine is entitled Juror Number One v. California, 2011 WL 567356 (U.S. District Court for the Eastern District of California, February 14, 2011).

This is essentially how the civil suit arose:

Afterward, Juror Number Five contacted defense counsel and stated that plaintiff had posted `comments about the evidence during trial’ on his Facebook page. Judge Kenny held an evidentiary hearing into the alleged juror misconduct. The hearing started on September 17, 2010, and continued on October 1, 2010. Plaintiff testified at the hearing, but was not appointed counsel.

Now, back to what happened after Judge Kenny held the evidentiary hearing on the alleged juror misconduct. This, according to the Complaint, is what happened then:

Counsel for the defendants in the Criminal Trial issued a subpoena to Facebook, Inc., requesting copies of postings made by Juror Number One.

Citing limitations on its ability to disclose the postings pursuant to the Stored Communications Act, [18 U.S. Code §§ 2701-2712], Facebook, Inc. moved to quash the subpoena.

Counsel for the Defendants in the Criminal Trial argued that the Act was unconstitutional in that it subverts due process and a fair trial by denying criminal defendants access to information needed in their defense while permitting government entities to obtain that information in connection with a criminal investigation.

Counsel for the Defendants in the Criminal Trial, thereafter, issued a subpoena to Plaintiff seeking the information provided by Facebook, Inc.

Plaintiff moved to quash the subpoena on the basis that it was overbroad, burdensome, and an unreasonable intrusion on Plaintiff’s privacy rights under the California Constitution and the [Electronic Communications Privacy Act].

On February 4, 2011, Judge Kenny quashed the subpoena on the basis that it was overbroad and issued an Order . . . requiring Plaintiff `within 10 days from the date of this order . . . execute a consent form sufficient to satisfy the exception stated in Title 18, U.S.C. section 2702(b) allowing Facebook to supply the posting made by Juror # 1 during trial.’. . .

So he went to federal court. According to the federal court’s order, on February 14 Juror Number One went to the U.S. District Court for the Eastern District of California, seeking

a temporary restraining order and preliminary injunction to enjoin Judge Kenny from enforcing the Order, to enjoin Facebook from disclosing the postings, and enjoin the criminal defendants from undertaking any further efforts to obtain the postings.

Plaintiff argues that requiring a signed consent form would be a violation of the Fourth Amendment right to privacy and Fifth Amendment right against self-incrimination through 42 U.S. Code § 1983, and would also violate the Electronic Communications Privacy Act, 18 U.S. Code § 2510, the California Constitution, and various state statutes. The motion was filed . . . February 14, 2011, which is the date on which plaintiff is required by the Order to sign the consent form.

I’m sure everyone knows what the 4th and 5th Amendments are. Section 1983 of Title 42 of the U.S. Code is part of the Civil Rights Act of 1871. Section 1983 creates a civil cause of action for a deprivation of rights under the Constitution and federal law. The first sentence of § 1983 reads as follows:

Every person who under color of any statute, ordinance, regulation, custom, or usage, of any State or Territory or the District of Columbia, subjects . . . any citizen of the United States . . . to the deprivation of any rights, privileges, or immunities secured by the Constitution and laws, shall be liable to the party injured in an action at law.

So Juror Number One was claiming that enforcing Judge Kenny’s order would violate his Constitutional rights under the 4th Amendment, 5th Amendment and/or his rights under federal law, i.e., the Electronic Communications Privacy Act. The federal district court judge’s order addresses the initial, and important, issue of whether a federal court was barred from intervening in the case under the abstention doctrine.

As Wikipedia notes, the doctrine encompasses several doctrines under which “a court of law in the United States . . . might (or in some cases must) . . . refuse to hear a case, when hearing the case would potentially intrude upon the powers of another court.” As Wikipedia also notes, the United States has a federal court system with limitations on

the cases federal courts can hear, while each state has its own individual court system. In some instances, the jurisdiction of these courts overlaps, so a lawsuit between two parties may be brought in either or both courts. The latter circumstance can lead to confusion, waste of resources, and the appearance that one court is disrespecting the other. Both federal and state courts have developed rules determining when one court will defer to another's jurisdiction over a particular case.

One of these doctrines is known as Younger abstention, after the Supreme Court’s decision in Younger v. Harris, 401 U.S. 37 (1971). The judge assigned Juror Number One’s request for a temporary restraining order and an injunction analyzed the need for the federal court to abstain in this case, explaining that abstention under Younger is required “`if (1) there are pending state judicial proceedings, (2) the state proceedings implicate important state interests, and (3) the state proceedings provide an adequate opportunity to raise federal questions.’” Juror Number One v. California, supra (quoting Polykoff v. Collins, 816 F.2d 1326, 1332 (U.S. Court of Appeals for the 9th Circuit 1987)).

Juror Number One also argued, however, that “the state court proceedings do not provide an adequate remedy to raise federal questions because he `does not believe the California Supreme Court will act quickly enough.’” Juror Number One v. California, supra. The federal judge wasn’t persuaded:

Second, and more importantly, when a federal plaintiff argues that Younger abstention is inappropriate because the state court cannot hear the constitutional claim within the limited time available, `the burden on this point rests on the federal plaintiff to show “that state procedural law bar[s] presentation of [its] claims.”’ . . . [P]laintiff has not shown that state law either procedurally or substantively bars presentation of his claims to the California Supreme Court.

(On Wednesday, I'll do a post analyzing Juror Number One's arguments under the 4th and 5th Amendments.)

Posted by Susan Brenner at 8:33 AM

Very informative. Your insight is appreciated.

Why isn't juror number 5 facing any troubles, she was on facebook with juror number one and reported it. Also, why wasn't the courts asking for her records.