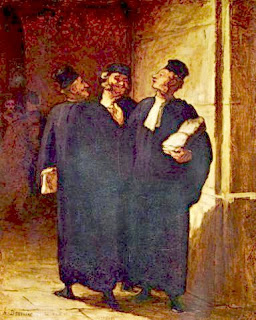 As Wikipedia explains (and as everyone probably knows), the attorney-client privilege is an evidentiary privilege “that protects communications between a client and his or her attorney and keeps [them] confidential.” As Wikipedia notes, the policy behind the privilege is that it encourages free and open communications between a lawyer and his/her client, which helps the lawyer to a better job of representing the client.

If I know my attorney can’t be forced to disclose what I tell her, I’m much more likely to tell her what really happened than if I knew she could be forced to reveal what I told her. (And the same principle underlies other evidentiary privileges, like the doctor-patient privilege or the priest-penitent privilege.)

This post is about an issue that came up in Dawe v. Corrections USA, 2009 WL 3233883 (U.S. District Court for the Eastern District of California 2009). I really don’t know what the case (a civil suit) is about. According to one website, Brian Dawe is (or was) the Executive Director of Corrections USA, “a nonprofit coalition of the nation’s public corrections officers.” And that’s about all I know as to the facts in this case or what kind of claims are involved.

That’s really not essential. The judge to whom the case is assigned issued the above-cited opinion in October of this year; it contains the federal judge’s rulings on several discovery motions filed by the plaintiffs and defendants in the case. Dawe v. Corrections USA, supra. As Wikipedia explains, “discovery is the pre-trial phase in a lawsuit in which each party through the law of civil procedure can request documents and other evidence from other parties”.

As Wikipedia also explains, discovery requests don’t trump privileges, including the attorney-client privilege. Discovery rules, like those in the Federal Rules of Civil Procedure, generally bar one party from using discovery to obtain material that contains information protected by a privilege, such as the attorney-client privilege. As Wikipedia notes, when one side seeks the production of such material, these rules usually require the other party to produce a “`privilege log’ which describes the privileged information or material in a way that allows others to see . . . (if) it is privileged, but does not divulge the privileged material.”

That’s what happened in this case. The defendants sought access to emails that the plaintiff claimed were protected by the attorney-client privilege. All the defendants were given was a privilege log that had these entries (which I’ve slightly edited and reformatted):

8/21/06 Email between Gary Harkins and attorney Barry Peek, with prior email exchange between Mr. Harkins and Richard Loud (cc to Mr. Peek) re issues to address with corporate and employment attorneys and advice provided by California corporate attorney re, removal and replacement of Board of Directors’ members

9/26/06 Email to Richard Loud and Brian Dawe re information provided by attorney related to potential claims by and against CUSA and representatives thereof.

protect communications between parties, even if an attorney is `copied,’ and even if the communications include legal advice; they argue that the disclosure constitutes a waiver of any privilege that may originally have existed between attorney and client. Plaintiffs respond that these documents are privileged because they transmit information provided by attorneys who have been jointly consulted regarding possible litigation by and against CUSA.

The federal judge began his analysis of the arguments by noting that the attorney-client privilege protects communications “between a lawyer and client which are intended to be confidential”. Dawe v. Corrections USA, supra. He then addressed the nature and status of the emails at issue:

The first privilege log entry is a four-message e-mail string that is fairly described by the privilege log. The initial (earliest in time/last in string) message, from Loud to Harkins, sets forth several questions to be asked, respectively, of a `corporate attorney’ and an `employment attorney.’ The message is a communication between parties, does not contain legal advice, and is not subject to attorney-client privilege.

The second message, from Harkins to Loud, with a `cc’ to Barry Peek (described to the court as `another lawyer in this case’ . . . recounts Harkins' discussion `with Mr. May, a ca corporate attorney,’ and the legal advice conveyed therein. This, again, is a communication among parties. While the subject information was clearly protected when conveyed by `Mr. May’ to Harkins, Harkin's communication (in which he transmits that information) to third parties Dawe and Loud, notwithstanding that the information was simultaneously `cc'd to attorney Peek, has not been shown to be a privileged communication. See, e.g., U.S. v. ChevronTexaco Corp., 241 F.Supp.2d 1065 (N.D. Cal. 2002) (`[t]he mere fact that outside counsel was copied with the e-mail will not shield communications not made for the purpose of securing legal advice’).

The court need not, however, reach these issues since the initial messages in the e-mail string were, essentially, `attachments’ to the final message between client and attorney. The third message is a single question posed by Peek to Harkins, concerning the advice given by Mr. May, while the fourth and last (most recent in time/first in string) e-mail message is Harkins' response to Peek, responding to the question. These last two messages are clearly protected by attorney-client privilege, and while the application of privileges to email communications remains an evolving area of the law, it appears that the current weight of authority favors examination of the most recent communication as the means for characterizing the entire e-mail string.

Dawe v. Corrections USA, supra. The judge then elaborated on the last point, noting that the U.S. v. ChevronTexaco court found that each email

`consists of the text of the sender's message as well as all of the prior e-mails that are attached to it. Therefore, [the] assertion that each separate e-mail stands as an independent communication is inaccurate. What is communicated with each e-mail is the text of the e-mail and all the e-mails forwarded along with it. . . . . “As Upjohn Co. v. United States makes clear, the fact that non-privileged information was communicated to an attorney may be privileged, even if the underlying information remains unprotected. 449 U.S. 383 (1981). As applied in the e-mail discovery context, the court understands Upjohn to mean that even though one e-mail is not privileged, a second e-mail which forwards that prior e-mail to counsel might be privileged in its entirety. In this respect, the forwarded material is similar to prior conversations or documents that are quoted verbatim in a letter to a party's attorney.”’

The judge therefore held that the first entry in the privilege log was “indeed privileged and should remain confidential.” Dawe v. Corrections USA, supra. He then turned to the second entry, which was a

single e-mail . . . from Gary Harkins, to Brian Dawe and Richard Loud, repeating legal advice Harkins received from his attorney. The legal information is specific to Harkins, even to the possible detriment of Dawe and Loud. While the information contained therein was clearly protected by the attorney-client privilege when transmitted from Harkins' attorney to Harkins, the essential question is whether Harkins waived the privilege by transmitting it to third parties Dawe and Loud.

The plaintiffs argued that the attorney-client privilege had not been waived because the email was protected by a “joint defense” or “common interest” privilege that protected communications involving two or more clients who have retained or consulted a lawyer on a matter of common interest. Dawe v. Corrections USA, supra. After reviewing the cases that had addressed this apparent privilege, the federal judge in this case found that it does not encompass communications between co-plaintiffs when “`counsel is not present, or at the very least, where the specific conversations of the co-parties at issue was not expressly directed by counsel.’” Dawe v. Corrections USA, supra.

The judge held, therefore that

Harkins waived the confidentiality of the information he obtained from his attorney when he conveyed that information to Dawe and Loud. The court concludes, therefore, that the second entry in Harkins' privilege log is not privileged. Plaintiffs shall provide a copy of this e-mail to defendants within five days after this order is filed.

This obviously isn’t a cybercrime case. I decided to write about it because the issue of how the attorney-client privilege applies to emails that incorporate the text of prior emails among the same parties can come up in a criminal case just as easily as it can in a civil case. And I hadn’t seen much written on this; I haven’t found a cybercrime case in which it’s come up, at least not so far.

Posted by Susan Brenner at 1:19 PM