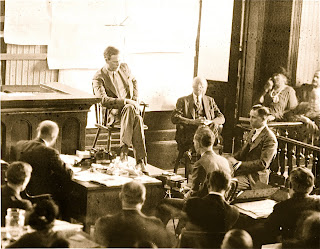 I did a post earlier this year on how courts are trying to discourage jurors from using the Internet (including Twitter) during trials. As I explained, the concern here is that jurors will use these resources to conduct their own investigations into issues involved in a trial, which violates the premise that a jury should only decide a case based on evidence that was properly admitted during the trial.

This post is about a different use – or proposed use – of Twitter. The proposal came up in connection with the then-upcoming trial in U.S. v. Shelnutt, U.S. District Court for the Middle District of Georgia (Case No. 4:09-CR-14). As this news story explains, criminal defense attorney J. Mark Shelnutt was charged with conspiring to launder drug money and with 31 counts of money laundering. His trial began in early November of this year.

Prior to trial, a reporter for the

Columbus Ledger-Enquirer newspaper . . . requested that he be allowed to use his handheld electronic device ( e.g., a BlackBerry or cellular telephone) during the trial of the above-captioned criminal case to send electronic messages describing the court proceedings directly from the courtroom to his newspaper's `Twitter’ website. The messages, called `tweets,’ would then be available to any member of the general public who accessed the newspaper's Twitter website.

U.S. v. Shelnutt, 2009 WL 3681827 (U.S. District Court for the Middle District of Georgia 2009). According to this opinion, Shelnutt objected to the request but the prosecution took “no position on the issue, leaving it to the Court’s discretion.” U.S. v. Shelnutt, supra.

The federal district judge to whom the case was assigned denied the request because he found that “Rule 53 of the Federal Rules of Criminal Procedure prohibits `tweeting’ from the Courtroom and that Rule 53 does not unconstitutionally restrict the freedom of the Press under the First Amendment”. U.S. v. Shelnutt, supra.

Since this is presumably the first case in which this issue has arisen (it’s the only one I can find), the judge didn’t literally mean that Rule 53 prohibits sending tweets while a court is in session. Instead, the judge found that tweeting falls within the more general prohibitions contained in Rule 53.

Here is what Rule 53 of the Federal Rules of Criminal Procedure says:

The rule dates back to 1944, but has been amended on several occasions. According to one law review article, it has its origins in events that occurred in the 1930s:

[H]igh profile nineteenth-century court proceedings were `. . . conducted in carnival-like atmospheres, attended by thousands of spectators, and received saturation press coverage.’ These trials were the subject of `mass interest and entertainment,’ thereby raising `concern for the rights of defendants. . . . [C]riticism of the sensational and highly disruptive media coverage surrounding the 1935 trial of Bruno Hauptmann, the alleged kidnapper and murderer of the infant son of Charles Lindbergh, precipitated the nationwide regulation of court reporting and near ban of photographic trial coverage. Some accounts of the proceedings asserted that over 830 individuals affiliated with various media organizations were present at the courthouse to cover the trial, resulting in frequent disruptions at the trial.

Henry F. Fradella & Brandon Burke, From the Legal Literature, 43 Criminal Law Bulletin (2007) (notes omitted). The abuses of the Lindbergh trial prompted the American Bar Association to appoint a Special Committee on Publicity in Criminal Trials at its 1935 convention. Fradella & Burke, supra. The committee, which consisted of 12 reporters and 5 lawyers, reported back to the ABA at its 1937 convention. Daniel Stepniak, A Comparative Analysis of First Amendment Rights and the Televising of Court Proceedings, 40 Idaho Law Review 315 (2004).

“While the Committee's recommendations revealed a reluctance to impose a total prohibition on cameras, the Committee appeared to ultimately concede that in its then current state, recording equipment tended to distract trial participants from their primary task.” Stepniak, supra. As a result, the convention adopted Canon 35 of the ABA Code of Judicial Ethics, which provided as follows:

`Proceedings in court should be conducted with fitting dignity and decorum. The taking of photographs in the courtroom during sessions of the court or recesses between sessions, and the broadcasting of court proceedings are calculated to detract from the essential dignity of the proceedings, degrade the court and create misconceptions with respect thereto in the minds of the public and should not be permitted.’

Stepniak, supra. According to both sources, the original version of Rule 53 was adopted to implement the provisions of Canon 35 in federal court proceedings.

And that brings us back to Shelnutt and to Twitter. The judge in the Shelnutt case found that the

term `broadcasting’ in rule 53 includes sending electronic messages from a courtroom that contemporaneously describe the trial proceedings and are instantaneously available for public viewing. Although `broadcasting’ is typically associated with the dissemination of information via television or radio, its plain meaning is broader than that. The definition of `broadcast’ includes `“casting or scattering in all directions”’ and `“the act of making widely known.”’ Webster's Third New International Dictionary (Unabridged) 280 (1993). It cannot be reasonably disputed that `twittering’ . . . would result in casting to the general public and thus making widely known the trial proceedings. Moreover, it appears clear that the drafters of Rule 53 intended to extend the Rule's reach beyond the transmission of trial proceedings via television and radio.

Prior to . . . 2002 . . . the Rule . . . prohibited the `taking of photographs’ and `radio broadcasting.’ Fed.R.Crim.P. 53 (1946) (amended 2002) (emphasis added). The 2002 Amendments eliminated the modifier `radio’. . . . [A]lthough although the Advisory Committee's notes state that the Committee did not consider the change to be substantive, the . . . Committee made the change with the intention that additional types of broadcasting would be covered by the Rule. See Fed.R.Crim.P. 53 advisory committee's note (`Given modern technology capabilities, the Committee believed that a more generalized reference to ‘broadcasting” is appropriate.’)

Based on the foregoing, the Court finds that the contemporaneous transmission of electronic messages from the courtroom describing the trial proceedings, and the dissemination of those messages in a manner such that they are widely and instantaneously accessible to the general public, falls within the definition of `broadcasting’ as used in Rule 53. Therefore, this type of broadcasting is prohibited under Rule 53, unless the application of Rule 53 is unconstitutional because it unduly restricts the freedom of the press under the First Amendment.

U.S. v. Shelnutt, supra. I’m not going to get into the First Amendment issue for two reasons: One is space; I don’t have enough to do that issue justice in this post. The other reason is that I can see a good argument, given Supreme Court precedent in this area, that there is not a First Amendment problem (which doesn’t mean, maybe, that there shouldn’t be . . . but that’s another post).

What I want to focus on is this court’s analysis of why Rule 53 bars tweeting during a trial. From the analysis in the law review articles cited above, I gather that the real purpose of Canon 35 and Rule 53 is to prevent media from disrupting court proceedings. Stepniak, for example, says “as many as 141 newspaper reporters and photographers, 125 telegraph operators, and 40 messengers” were simultaneously present “in the courtroom” during the Hauptmann trial. Stepniak, supra. The judge in that trial seems to have imposed some restrictions on taking photographs and recording newsreel images during the proceedings, but some of the media seem to have violated those restrictions. Stepniak, supra.

The underlying concern, then, is that broadcasting (in particular) is barred not because it allows information about the proceedings to be “widely and instantaneously accessible to the general public,” but because the practical aspects of implementing a radio or TV broadcast threaten to disrupt the proceedings and/or distract the jurors. A blanket ban on broadcasting may have been the best (or only) way to address that concern in the 1930’s and even in the 1950s, but the increased sophistication of modern technology no longer justifies equating broadcasting with disruption. As the Fradella & Burke article notes, 47 states currently allow at least some TV access to court proceedings. And in 1981, the U.S. Supreme Court found that just as the risk of “juror prejudice . . . does not justify an absolute ban on news coverage of trials by the printed media”, the risk of “such prejudice does not warrant an absolute constitutional ban on all broadcast coverage” of court proceedings. Chandler v. Florida, 449 U.S. 560 (1981).

I could go on, but I suspect I’ve pretty much made my point. I don’t see why a reporter tweeting during a criminal trial is any more disruptive than letting a reporter take notes by hand or on a laptop during a trial . . . or letting an artist create sketches that will later be broadcast to the public via television.

(Oh, and while it's not relevant to this post, according to this story the jury acquitted Shelnutt on all charges.

Posted by Susan Brenner at 2:58 PM