The Email and the Roadblock 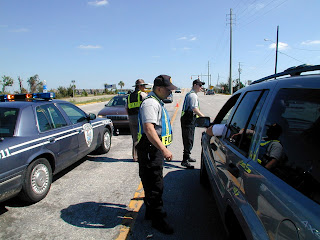 After being charged with “driving under the influence (DUI) and various other offenses” Douglas Wayne Brown “moved to suppress evidence found as result of roadblock checkpoint.”  State v. Brown, __ S.E.2d __, 2012 WL 987541 (Georgia Court of Appeals 2012).  The trial judge granted the motion and the prosecution – “the State” – appealed the ruling.  State v. Brown, supra.
This is how Brown came to be charged with DUI and “various other offenses”:

On April 9, 2010, [he] was arrested by officers of the Cobb County Police Department, charged with various offenses, and ultimately indicted for VGCSA, DUI, two counts of Obstruction of an Officer and attempted removal of a weapon from a Peace Officer. . . .
A few days prior, . . . Captain Cox of the Cobb County Police Department, who was precinct commander of Zone 4 in Cobb County, sent an email to all precinct 4 officers in response to a `citizens traffic complaint’ he had received. The complaint referenced speeding, racing and littering on Groover Road. Cox's email instructed all precinct 4 officers to handle the complaint. No further instructions were given. . . .
On April 9, Sgt. Mar[ch]etta of the Cobb County Police Department made a decision in response to the e-mail sent by Cox several days earlier, to set up a traffic safety check point, or roadblock. He . . . did this acting as the supervisor implementing the checkpoint. . . .  Only two officers participated in the checkpoint, Sgt. Mar[ch]etta and Officer Smith. . . .
The Officers activated their blue lights, wore vests and marked the checkpoint with cones. Every car was to be stopped for purposes of enhancing roadway safety. Both Mar[ch]etta and Smith were acting as screeners of drivers. . . .
[Brown] approached the roadblock at approximately 7:05 p.m. Smith, acting as a screener, made the initial contact after directing [him] to stop his vehicle. Smith smelled marijuana coming from the car, and observed a large folding knife clipped to [Brown’s] pants. [He was removed from the vehicle and immediately became combative with both officers.

Considerable effort from both officers was necessary to restrain him, and put him on the ground. [Brown] was arrested and charged with various offenses, including possession of marijuana, which was found following a subsequent search of the vehicle.

State v. Brown, supra.
In granting Brown’s motion to suppress, the trial judge found that while Marchetta was

authorized to implement a checkpoint as a supervisor, no evidence was presented that the roadblock was planned in advance to occur at a specific time. In conjunction with this finding, the court concluded Marchetta made the decision while acting as an officer in the field. The court found further that the roadblock was not sufficiently manned because Marchetta `should not act as a screening officer, the investigating officer and the chase-vehicle officer.’

State v. Brown, supra.
The prosecution argued, on appeal, that the “legal requirements for the roadblock . . . were met and therefore the trial court should have denied Brown’s motion to suppress.”  State v. Brown, supra.  The Court of Appeals began its analysis of the prosecution’s argument by noting that “`[i]n examining the propriety of roadblock stops, the issue for resolution is not whether there was probable cause to stop the vehicle, but whether the roadblock stop was . . . implemented and conducted in a manner as to demonstrate that the stop of the vehicle was ‘reasonable’ under the 4th Amendment.’” State v. Brown, supra (quoting LaFontaine v. State, 269 Ga. 251, 497 S.E.2d 367 (1998)).
As you probably know, the 4th Amendment creates a right to be free from “unreasonable” searches and seizures.  As Wikipedia notes, a “seizure” of a person occurs when “by means of physical force or [a] show of authority” law enforcement officers restrain his or her “freedom of movement” so that under the circumstances, a “reasonable person would believe that he was not free to leave.”  That obviously applies to a roadblock or, as it’s often known, a traffic or sobriety checkpoint.  And as I’ve noted in earlier posts, a 4th Amendment “search” occurs when law enforcement officers violate a reasonable expectation of privacy in a place of thing; as I’ve also noted, to have such an expectation of privacy, you must believe the place/thing is “private” and society must accept your belief as objectively reasonable.
As the facts above demonstrate, Brown was subjected to a 4th Amendment seizure, i.e., officers interfered with his freedom of movement, and a subsequent search.  For the state to be able to use evidence obtained from either or both, the seizure and/or search had to be “reasonable” under the 4th Amendment, as the Supreme Court recognized in Michigan Department ofState Police v. Sitz, 496 U.S. 444 (1990).
Earlier, in Delaware v. Prouse, 440 U.S. 648 (1979), the Supreme Court had held that “random stops made by Delaware Highway Patrol officers in an effect of apprehend unlicensed drivers and unsafe vehicles” violated the 4th Amendment.  Michigan Department of State Police v. Sitz, supra.  It explained that “[t]his kind of standardless and unconstrained discretion is the evil the Court has discerned when in previous cases it has insisted that the discretion of the official in the field be circumscribed, at least to some extent.”  Delaware v. Prouse, supra. So, as Wikipedia notes, when the Sitz Court upheld the Michigan checkpoints, it implicitly acknowledged that there

must be guidelines in order to avoid becoming overly intrusive. In other words, checkpoints cannot simply be set up when, where and how police officers choose. As often happens in Supreme Court decisions, however, the [Court] left it to the states to determine what those minimal safeguards must be. . . .

That brings us to how Georgia approaches roadblocks:  As noted above, in LaFontaine, the state Supreme Court held that “roadblock stop[s]” must be implemented in a manner that “demonstrated . . . the stop . . .  was `reasonable’ under the 4th Amendment.”  It also “outlined the minimal constitutional prerequisites for a roadblock” in Georgia:

A roadblock is satisfactory where the decision to implement the roadblock was made by supervisory personnel rather than the officers in the field; all vehicles are stopped as opposed to random vehicle stops; the delay to motorists is minimal; the roadblock operation is well identified as a police checkpoint; and the `screening’ officer's training and experience is sufficient to qualify him to make an initial determination as to which motorists should be given field tests for intoxication.

LaFontaine v. State, supra.  The LaFontaine court also noted that the “purpose of these requirements is to ensure that individuals are not subject to arbitrary or oppressive invasions solely at the unfettered discretion of officers in the field.”

That brings us back to State v. Brown.  The trial judge found the roadblock in that case “allegedly” violated “the requirements set forth in LaFontaine” in two respects:  “the . . . State failed to prove the decision to implement the checkpoint was made by supervisory personnel rather than by officers in the field; and . . . the roadblock was not sufficiently manned.”  State v. Brown, supra.

The Court of Appeals did not agree.  With regard to the first issue, it found that the trial judge based his decision that Marchetta was acting as

an officer in the field, only in conjunction with and reliance upon the email Marchetta received from his precinct commander a few days prior to the implementation of the roadblock. Indeed, the trial court concluded that `[t]he e-mail from the precinct commander which initiated the response simply instructed all precinct officers to handle the complaint. No checkpoint was ordered and no instructions were given.’

It is clear that in reaching this decision, the trial court relied heavily upon a specific factual finding that `no evidence was presented that it was planned in advance to occur at a specific time.’ This factual finding is belied by the record. The record reveals without dispute that Marchetta decided to implement the roadblock two days before and even sent another officer to survey the road before implementing it.

State v. Brown, supra.  The court found that while “the reason for Marchetta's decision originated with his captain, the decision to implement the roadblock was made by Marchetta, a supervisor who, as even the trial court concedes, had the authority to do so.”  State v. Brown, supra (emphasis in the original).

`made the decision while acting as an officer in the field,’ focusing solely on the fact that Marchetta's decision was prompted by the earlier email of his precinct commander. . . . [H]ad Marchetta lacked the authority to authorize and implement a checkpoint, it is clear that as an officer in the field, a roadblock premised solely upon the email of the precinct commander would have been wholly noncompliant with the mandate of LaFontaine.

However, based upon the facts presented here, the precinct commander's email is meaningless but for the fact that it apparently prompted the authorized action by Marchetta to implement a roadblock. Because . . . Marchetta had the independent supervisory authority to implement roadblocks, the actions of the precinct commander and the contents of his email are irrelevant to a proper analysis of whether the roadblock authorized by Marchetta was compliant with LaFontaine.

After noting that “officers are not precluded as a matter of law from acting simultaneously as a supervisor and a field officer”, the Court of Appeals held that the trial judge “erred in concluding as a matter of law that Marchetta was acting as an officer in the field.”  State v. Brown, supra.

The Court of Appeals also rejected the trial judge’s finding that the roadblock was not sufficiently manned “as required by LaFontaine.”  State v. Brown, supra.  It noted that “whether the roadblock was sufficiently manned is not among the specific factors enumerated” in LaFontaine, and it found “no authority holding that an understaffed roadblock alone is sufficient to demonstrate that a stop was unreasonable under the 4th Amendment.”  State v. Brown, supra.

The court then explained that Marchetta testified that based on the

Moreover, [in Gonzales v. State, 289 Ga. App. 549, 657 S.E.2d 617 (2008),] we held that a supervising officer's participation in a roadblock does not render the roadblock unconstitutional. . . .The trial court therefore also erred in its conclusion that suppression was required because the roadblock was not sufficiently manned.

Four of the seven Court of Appeals judges therefore voted to reverse the trial judge’s granting Brown’s motion to suppress, which presumably takes the case back to where it was when the motion was granted.  State v. Brown, supra.

The other three judges dissented because they found that determining whether Marchetta was acting as a “field officer” or as a “non-field officer” when he made the “decisions about time, place and duration” of the roadblock were “questions of fact” that were “difficult to discern.”  State v. Brown, supra.  They, therefore, concluded that the trial court should be

affirmed because it found, after hearing from witnesses, that the person who made the decisions, Sgt. Marchetta, was acting as a `field officer’ and not as a `non-field officer’ at the programmatic level when he made the crucial decisions. We should not second guess the trial court based on a cold record.

State v. Brown, supra.
Posted by Susan Brenner at 9:31 AM