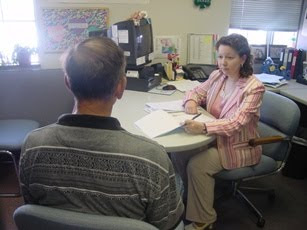 In 2007, Russell Lee Gooch was charged with stalking, threatening a witness, making criminal threats and contempt, all in violation of California law. People v. Gooch, 2011 WL 1473938 (California Court of Appeals 2011).

In March, 2009, Gooch was residing at the Foundation in

Los Angeles and Bruneau had relocated to another state. On March 19, Bruneau logged onto her Yahoo! e-mail account. On the lower right corner of her inbox, Bruneau saw a pop-up window with an instant message stating that `RUSSELL would like to add you to his or her Online Contacts list,’ and a pushbutton to `Accept’ or `Decline.’ The upper left corner of the pop-up window listed an electronic address of `rlgrn@sbc.’ Bruneau believed Gooch . . . sent the instant message because when they were married, he had a Yahoo! e-mail account with the address `rlgrn@yahoo.com.’ Gooch was a registered nurse at the time of their marriage, and Bruneau recognized the initials `rlgrn’ as standing for Russell Lee Gooch, Registered Nurse. Bruneau was not aware of anyone else named Russell who would attempt to electronically contact her. . . .


Bruneau [was afraid] thatGooch had been released from his residential treatment program and was attempting to contact her. According to Bruneau. . . . [He] abused [her] during their marriage by beating her, breaking her ribs, and threatening to kill or harm her. After their marriage ended, Gooch continued to threaten Bruneau through voice-mails and e-mails, and she eventually obtained a restraining order against him. . . . Bruneau remained fearful that Gooch would harm her or her family.


On the day she received the instant message, Bruneau called Investigator Tom Miller with the Santa Barbara County District Attorney to report the contact. . . . [and gave] Miller her Yahoo! user name and password so he could access her e-mail account. Later that day, Miller logged onto Bruneau's Yahoo! e-mail account. The pop-up window with the instant message again appeared on the lower right corner of [her] inbox. Miller printed a hard copy of the inbox screen image, but he neither preserved an electronic copy of the pop-up window nor attempted to electronically trace the source of the instant messaging communication.

On May 18, Gooch’s probation officer interviewed him about the instant message:

Gooch admitted [having] a Yahoo! e-mail account with the address `rlgrn@yahoo.com,’ and an SBC e-mail account with the address `rlgrn@sbcglobal.net’. . . . [but] denied attempting to contact Bruneau. . . . According to Gooch, both Bruneau and his father were aware of his user names and passwords to his e-mail accounts, and his father regularly accessed the Yahoo! account to ensure it remained active. Gooch [said] he did not know who might have sent the instant message to Bruneau, unless his father had done so inadvertently when he accessed the e-mail account or the message had been generated automatically by the e-mail system. Based on the alleged contact with Bruneau and his refusal to accept responsibility for it, Gooch was terminated from the Delancey Street Foundation in May 2009.

The Los Angeles District Attorney “initiated probation violation proceedings” against Gooch; Miller and Bruneau testified for the prosecution at the probation revocation hearing. People v. Gooch, supra. They “described seeing the pop-up window with the instant message” but admitted “the only action they took to preserve the message was to print a screen image of the inbox.” People v. Gooch, supra. The prosecution also presented “a declaration from a Yahoo! representative” who stated that “`for a user to add someone as a Messenger “Contact,” that user must proactively request a person to become a contact. While Yahoo! may make suggestions to a user that he or she invite someone as a contact, the user must take action to do so.'” People v. Gooch, supra.

Gooch testified on his own behalf, and denied having anything to do with the instant message. People v. Gooch, supra. According to Gooch, when the message was sent he was residing at the Delancey Street Foundation where his days were structured:

At 8:00 each morning, . . . [he] and . . other residents [took] a bus owned by the . . . Foundation to a warehouse. . . . [There,] Gooch worked in an office where he used a land line telephone to make calls soliciting contributions. There were always six or seven people in the office with him also making calls. At 4:30 each afternoon, Gooch and the others [took] the bus back to the residence and [spent] the rest of the evening attending . . . group meetings. [He] admitted [having] a Yahoo! e-mail account with the address `rlgrn@yahoo.com’. . . . [but said] he did not have access to the internet from 2006 until May 21, 2009, after he was terminated from the Delancey Street Foundation.

In reviewing his appeal, the Court of Appeals noted, first, that at a probation revocation hearing “the prosecution has the burden of proving that the defendant violated probation by a preponderance of the evidence.” People v. Gooch, supra. The court also noted that its review of a probation revocation is limited to determining whether the record created below contains “substantial evidence of solid value, contradicted or uncontradicted,” that supports the lower court’s decision. People v. Gooch, supra.

The Court of Appeals found that the “trial court abused its discretion in revoking Gooch’s probation because the evidence was insufficient to support a finding” that he caused the instant message to be sent to Bruneau. People v. Gooch, supra.

The evidence . . . merely established that Bruneau received an instant message that referenced the first name `Russell’ and the electronic address `rlgrn@sbc,’ and Gooch previously had an SBC e-mail account with the address `rlgrn@sbcglobal.net.’ However, none of the evidence supported a finding that the instant message was in fact sent from an electronic account belonging to Gooch, or that Gooch had access to an electronic account at the time the message was sent. Indeed, the undisputed evidence . . . was to the contrary. . . .


[T]he evidence failed to establish that the message could have been sent from any type of electronic account belonging to Gooch. Although [it] included a reference to `rlgrn@sbc,’ it was undisputed that Gooch's SBC e-mail account with the address `rlgrn@sbcglobal.net’ . . . had been deactivated for two years prior to the message appearing in Bruneau's inbox. No other evidence was offered to demonstrate that, despite the deactivated status of Gooch's SBC account, the message nevertheless could have been generated from that account.


Additionally, the evidence failed to establish that Gooch had access to any type of electronic account at the time the instant message was sent. To the contrary, the parties stipulated at the probation revocation hearing that, when Gooch was in the Delancey Street Foundation's residential treatment program, he did not have access to a computer or to the internet.

Finally, the court noted that the trial judge found Gooch must have caused the message “to be sent to Bruneau because there was no explanation as to why anyone else would have sent [it]. Given the absence of other identifiable suspects, the trial court inferred that Gooch was the only one with a motive to do so.” People v. Gooch, supra. The Court of Appeals explained that this was error because (i) the prosecution had the burden of proof to “establish by a preponderance of the evidence that the instant message was in fact sent by or at the direction of Gooch, and not simply that there was an absence of evidence that it could have been sent by someone else and (ii) an absence of evidence is not the equivalent of the substantial evidence supporting the trial court’s decision. People v. Gooch, supra.