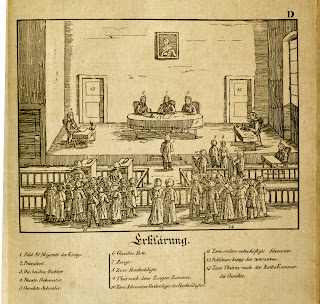 As you may know, the 6th Amendment, in part, guarantees “the accused” in a criminal prosecution “the right to a speedy and public trial”. In Gannett Co., Inc. v. DePasquale, 443 U.S. 368 (1979), the U.S. Supreme Court explained that its cases have uniformly

recognized the public trial guarantee as one created for the benefit of the defendant. In In re Oliver, 333 U.S. 257 (1948), this Court held that the secrecy of a criminal contempt trial violated the accused's right to a public trial. . . .

The right to a public trial, the Court stated, `has always been recognized as a safeguard against any attempt to employ our courts as instruments of persecution. The knowledge that every criminal trial is subject to contemporaneous review in the forum of public opinion is an effective restraint on possible abuse of judicial power.’ Id. at 270.

In an “explanatory footnote”, the Oliver Court noted the “frequently quoted” statement in

in [1] Cooley, Constitutional Limitations (8th ed. 1927) at 647: ‘The requirement of a public trial is for the benefit of the accused; that the public may see he is fairly dealt with and not unjustly condemned, and that the presence of interested spectators may keep his triers keenly alive to a sense of their responsibility and to the importance of their functions. . . . ‘

In re Oliver, supra.

On October 13, 2007 Cockett went to Webster's apartment to take care of their one-year-old child. The two argued and . . . Cockett squeezed Webster's throat, obstructing her breathing. This was done within hearing distance of their son, who was in his crib in a nearby bedroom. . . .

A few days [later], Webster went to work, still feeling the pain in her neck. Her supervisor noticed [she] did not look well and was moving awkwardly. Webster disclosed the rape to her supervisor and the supervisor drove her to the doctor. Webster told the doctor how Cockett had attacked . . . her. The doctor arranged for [her] to speak with a social worker, who advised her to obtain a protection order. . . .

The trial was set to begin on September 30, 2008. On the first day of trial, the prosecutor alerted the court that one of its witnesses, social worker Eloise Rice, had to testify before she left for Europe on October 9, 2008. . . . [T]o accommodate defense counsel's schedule, the court suggested the parties take a perpetuation deposition of Rice's testimony. Defense counsel agreed. . . .

The judge presiding over the trial “then inquired of counsel:”

THE COURT: [D]o we know [sic] to play the deposition in open court, or can I play it on my computer?

[DEFENSE COUNSEL:] You can play it on your computer, Your Honor. We'll accept that.

THE COURT: Thank you. Because I don't have-what do you call it, speakers on this computer.


The court then watched the videotape in chambers.

her co-workers, medical personnel who treated her after the rape, and her aunt, who testified that Cockett approached her about persuading Webster to drop the charges and admitted he engaged in `abnormal sex acts’ with Webster. . . Cockett testified in his own defense, denying that he had raped or assaulted Webster.

After hearing all the evidence, the judge found Cockett “guilty as charged” and also found that the prosecution proved the aggravating factor. State v. Cockett, supra. The judge “imposed an exceptional sentence of 41 months on the assault charge and an indeterminate sentence of a minimum of 130 months and a maximum of life on the rape charge.” State v. Cockett, supra.

Not surprisingly, Cockett appealed, arguing that his right to a public trial was violated when the trial judge “viewed the videotaped deposition in chambers. He argues that by doing so, the court closed the courtroom to the public without first . . . determining whether a courtroom closure was justified.” State v. Cockett, supra. Cockett relied on the Washington Supreme Court’s decision in State v. Bone-Club, 128 Wash.2d 254, 906 P.2d 325 (1995), in which the court held that a trial judge must evaluate five criteria before closing a trial to the public. State v. Cockett, supra.

In ruling on Cockett’s argument, the Court of Appeals noted that a court’s failure to conduct the Bone-Club “inquiry before closing a courtroom violates the right to a public trial and results in” the reversal of a conviction. State v. Cockett, supra. The court did not, however, find that the trial judge’s failure to conduct the inquiry in this case violated Cockett’s right to a public trial and required a reversal of his conviction:

[W]hile the court's in chambers viewing of the videotaped deposition occurred during the evidentiary phase of trial, it did not amount to taking evidence in a closed proceeding, as Cockett contends. Rather, . . . the court was simply viewing a videotape of deposition testimony that had already been taken in open court and was offered at trial as an exhibit in open court. . . .

Cockett cites no authority for the proposition that the court's viewing of an admitted exhibit in chambers during a bench trial violates the public trial right. Nor is there anything in the record to suggest that the court otherwise restricted public access to the videotape or viewed the tape in chambers to exclude the public; rather, it was clear from the record that the only reason the court did so was because the tape could only be heard if played on the computer that was located in chambers. Thus, Cockett fails to show that the viewing of the videotape in chambers amounts to a courtroom closure that implicates the public trial right.

viewing of the videotape in chambers amounted to a courtroom closure in violation of the public trial right, by requesting and affirmatively agreeing that the court do so, Cockett invited the closure and may not now challenge it as error. The basic premise of the invited error doctrine is that a party who sets up an error at trial cannot claim it as error on appeal.

The invited error doctrine applies even when the alleged error is of constitutional magnitude. Here, Cockett did not merely fail to object to or acquiesce to the closure, but actually suggested and affirmatively agreed to it. The court specifically asked for his input (i.e., `Do we know [sic] to play the deposition in open court or can I play it on my computer?’) and he responded that viewing it in chambers was an acceptable choice to him (i.e., `You can play it on your computer, Your Honor. We'll accept that.’). Because he invited the closure, he is barred from now claiming that it violated his public trial right.

State v. Cockett, supra. So, unless the Washington Supreme Court or the U.S. Supreme Court takes the case and reverses Cockett’s conviction, it looks like he’ll be serving the sentence imposed on him.