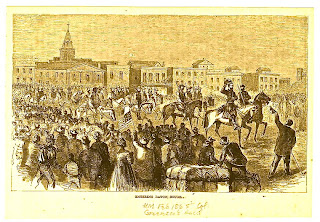 As Wikipedia notes, posse comitatus “is the common law . . . authority of a county sheriff or other law officer to conscript any able-bodied males to assist him in keeping the peace or to pursue and arrest a felon”. As Wikipedia also notes, the posse comitatus “power presumably continues to exist in those U.S. states that have not repealed it by statute.”

At least a few U.S. states have statutes that specifically retain the posse comitatus authority. Louisiana, for example, has a statute the title of which is “Posse comitatus; penalty for refusal to assist” and that provides as follows:

Every sheriff may call for the aid and command the services of every able bodied inhabitant of his parish to preserve the peace in cases of riot, to execute a process of court in cases where resistance is made or threatened. No person shall refuse to render such assistance.

Louisiana Revised Statutes § 33:1436. California has a similar statute: California Penal Code § 150 (crime to neglect or refuse to join “the posse comitatus”). And an Alabama statute specifically says the sheriff “may summon to his aid the posse comitatus of his county, armed and equipped as the occasion may require”. Alabama Code § 9-12-2. I tend to doubt that these statutes are used very often, but the posse comitatus power does seem to still exist at the state level. See, e.g., Joanne Eldridge, County Sheriffs in Colorado: Beyond the Myth, 38 Colorado Lawyer 19 (February 2009).

This post, however, is not about the use of the posse comitatus power. It is, instead, about a federal statute known as the Posse Comitatus Act and a recent federal case in which the applicability of that statute was at issue.

On May 19, 2008, Naval Criminal Investigative Services Special Agent Rachel Lepovetsky was conducting an undercover child exploitation investigation in Yahoo! chat rooms. . . . Lepovetsky posed as a 32-year-old mother of a six-year-old girl and a ten-year-old girl. While chatting in the Yahoo! chat room titled `fetish 14,’ [she] was contacted by a person using the screen name `Consul_211’ The conversation began as follows: `Good afternoon . . . do you enjoy looking at and chatting about pics of young girls?’ Lepovetsky responded `I don't have any to give you.’ Consul_211 replied `No problem . . . just enjoy’ at which point `Consul_211’ sent [her] images of suspected child pornography.

Lepovetsky's continued to converse with `Consul_211’ for nearly an hour, during which time, `Consul_211’ sent approximately twenty images of suspected child pornography. `Consul_211’ also stated that he had taken some pictures of `young models’ and proceeded to describe sexually explicit activity done by the `young models’ at his direction.

Thereafter, Lepovetsky obtained a search warrant seeking subscriber information from Yahoo! records for the user of the screen name `Consul_211.’ The warrant was executed on July 2, 2008, and disclosed that `Consul_211's’ subscriber information identified the user as a Jim Hall of Louisville, Kentucky, with a date of birth of January 15, 1962. Yahoo! also provided the IP address used by `Consul_211’ during his conversation with Lepovetsky on May 19, 2009.

Using this information, Lepovetsky prepared an affidavit and obtained a search warrant seeking the subscriber identity of the IP address in question from Insight Communications. The warrant was executed on August 1, 2008, and Insight revealed that the IP address used on May 19, 2009, was registered to Emma Jimenez, who had an address on Shady Lane in Louisville, Kentucky. Listed as the spouse/roommate of Jimenez in the subscriber information was . . . James Holloway.

At this point, Lepovetsky determined that James Jolloway, “the suspected user of the `Consul_211’ username,” was not associated with the military, and therefore forwarded the information she had gathered to the Kentucky Internet Crimes Against Children Task Force. U.S. v. Holloway, supra.

Detective Dan Jackman of the Louisville Metro Police Department Crimes Against Children Unit “cross-reference the information provided by” Lepovetsky with a “Kentucky Operator’s License for James Holloway, which revealed a match regarding the Shady Lane address provided by Insight as well as a near match regarding the date-of-birth provided by Yahoo!.” U.S. v. Holloway, supra. A criminal history search and a search of the Jefferson County Clerk’s Property Valuation Administrator web site “further confirmed that James Holloway resided at the address provided by Insight and that the home itself was owned by James Holloway.” U.S. v. Holloway, supra.

Holloway's address and date-of-birth to obtain a search warrant for Holloway's home on Shady Lane. The search warrant was issued and executed on September 12, 2008. Jackman and other law enforcement officials conducted the search of Holloway's home and seized several computers and hard-drives. A forensic analysis of those computers revealed 649 still images and 82 movie files of suspected child pornography. Holloway was subsequently indicted.

U.S. v. Holloway, supra. The opinion doesn’t tell me what Holloway was charged with, but I’m guessing possession (and maybe distribution) of child pornography in violation of federal law.

After he was indicted, Holloway moved to suppress “the evidence of his online conversation with Lepovetsky, arguing that her investigation was a violation of the Posse Comitatus Act.” U.S. v. Holloway, supra. As Wikipedia explains, the Posse Comitatus Act was “passed on June 18, 1878, . . . with the intention . . . of substantially limiting the powers of the federal government to use the military for law enforcement.” The Posse Comitatus Act (PCA) is codified as 18 U.S. Code § 1385. It originally applied only to the Army, but was amended in 1956 to add the Air Force and now provides as follows:

Whoever, except in cases and under circumstances expressly authorized by the Constitution or Act of Congress, willfully uses any part of the Army or the Air Force as a posse comitatus or otherwise to execute the laws shall be fined under this title or imprisoned not more than two years, or both.

The current version of the PCA only applies to the Army and Air Force, but a directive promulgated by the Secretary of Defense pursuant to another federal statute – 10 U.S. Code § 375 – extended the Act’s prohibitions to members of the Navy and Marine Corps. U.S. v. Holloway, supra. As implemented by the Secretary of the Navy, the directive “`prohibit [s] “direct” military involvement in civilian law enforcement activities but permit[s] “indirect” assistance such as the transfer of information obtained during the normal course of military operations or other actions that “do not subject civilians to [the] use [of] military power that is regulatory, prescriptive, or compulsory.”’“ U.S. v. Hitchcock, 286 F.3d 1064 (U.S. Court of Appeals for the 9th Circuit 2002) (citing Department of Defense Directive 5525.5 § E4.1.7.2. (Jan. 15, 1986) (as amended Dec. 20 1989)).

Under this Directive, `[a]ctions that are taken for the primary purpose of furthering a military . . . function of the United States, regardless of incidental benefits to civilian authorities[ ]’ do not violate the PCA. DoD Directive 5525.5 § E4.1.2 .1. The investigation and enforcement of the Uniform Code of Military Justice (UCMJ) is considered an independent military purpose under the DoD Directive. Id. § E4.1.2.1.1.

The federal district court judge who has been assigned the Holloway case noted that the “sexual exploitation of children is prohibited under the UCMJ”, and that Lepovetsky’s

under cover investigation was an attempt to stop the sexual exploitation of children as prohibited by the UCMJ. As such, her investigation falls under the independent military purpose exception. Once Lepovetsky was able to confirm that `Consul_211’ was not a member of the military, she immediately turned the investigation over to the appropriate civil law enforcement department. . . .

Lepovetsky was not personally involved with obtaining the search warrant to search [Holloway’s] home, the search of the home itself, the seizure of any evidence, the analysis of any evidence seized, or the arrest of Defendant. Lepovetsky's assistance in [Holloway’s] case was only incidental. [He] was not subjected to the regulatory, prescriptive, or compulsory use of military power. In situations such as this, the PCA is not violated by such assistance.

The judge also noted, in dictum, that even if there had been a

Posted by Susan Brenner at 8:53 AM