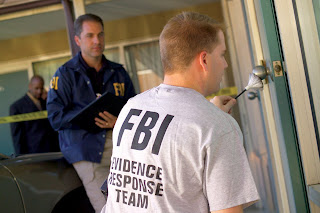 As I’ve explained in earlier posts, there is a procedure – at both the state and federal levels – by which someone whose property has been seized by law enforcement agents pursuant to, say, a search warrant can seek the return of that property.

Rule 41(g) of the Federal Rules of Criminal Procedure, for example, provides as follows:

A person aggrieved by an unlawful search and seizure of property or by the deprivation of property may move for the property’s return. The motion must be filed in the district where the property was seized.

As the U.S. Department of Justice’s U.S. Attorney’s Manual explains, a “target” of a federal grand jury investigation is “a person as to whom the prosecutor or the grand jury has substantial evidence linking him or her to the commission of a crime and who, in the judgment of the prosecutor, is a putative defendant.” U.S. Attorney's Manual § 9-11.150.

In other words, a target is someone who may very well find himself or herself indicted for federal crimes.

Under Rule 6(e)(2) of the Federal Rules of Criminal Procedure, “matter[s] occurring before the grand jury” must be kept secret, subject to certain exceptions spelled out in other parts of Rule 6. Because of that, the opinion we’re going to be examining does not identify the target who filed the Rule 41(g) seeking the return of evidence seized from his home and offices. The opinion refers to him as the “appellant” because he’s appealing the denial of his motion for return of property. In re Grand Jury, supra. I’m going to call him Mr. X, since I find using “appellant” over and over a little tedious.

This is pretty much all we know about what happened to Mr. X:

During an investigation by a grand jury sitting in Scranton, Pennsylvania, federal agents obtained a warrant to search the home and offices of the appellant. The warrant affidavit is sealed, but the government has indicated that the appellant is being investigated for federal-program theft, extortion, fraud, and money laundering. The warrant was executed on June 18, 2010; agents seized numerous documents and made copies of the appellant's hard drives (while leaving the computers undisturbed). To mitigate any inconvenience caused by the seizure, the agents agreed to provide the appellant with copies of the seized documents.

In re Grand Jury, supra. If you’re not familiar with the procedure federal officers use to obtain a search warrant, you might check out Rule 41(d) of the Federal Rules of Criminal Procedure. If you’d like to see an example of the kind of affidavit federal agents submit in seeking a search warrant, you can find one here.

Okay, back to the Scranton warrant and Mr. X. Since he apparently wasn’t satisfied with the agents’ offer to provide him with copies of the seized documents, he filed a Rule 41(g) motion in the U.S. District Court for the Middle District of Pennsylvania. In re Grand Jury, supra. Since Scranton is in the Middle District of Pennsylvania, Mr. X filed his motion in the “district where the property was seized.” Rule 41(g).

Mr. X’s motion challenged the validity of the search and seizure of his property and requested

In re Grand Jury, supra. (Courts have the authority to seal warrant affidavits, if and when that is deemed necessary. In the Matter of Sealed Affidavits, 600 F.2d 1256 (U.S. Court of Appeals for the 9th Circuit 1979).)

The government filed two responses to Mr. X’s motion: a “regular response” and a “supplemental ex parte response.” In re Grand Jury, supra.

The regular response argued that the appellant's motion was not a motion for the equitable return of property . . . but was, instead, a premature motion to suppress evidence. The response also defended the search and seizure against constitutional attack, stressing that they were conducted pursuant to a duly issued warrant.

The supplemental ex parte response, to which the sealed warrant affidavit was appended, explained that the government had a strong interest in maintaining the warrant affidavit under seal. According to the government, unsealing [it] would cause the identities of confidential informants to be revealed, expose individuals and businesses to public obloquy though charges against them may never be brought, cause the release of confidential grand jury and tax information, and `result in disclosing to [the appellant], prior to the initiation of charges, the precise areas of inquiry into which the investigation was looking, thereby facilitating [the appellant's] and other subjects' obstruction of the investigation.’

The district court judge denied Mr. X’s motion because it found that he “was not entitled to return of the seized property of unsealing of the warrant affidavit.” In re Grand Jury, supra. He appealed to the U.S. Court of Appeals for the 3d Circuit, which has jurisdiction over district court cases from Pennsylvania.

To be precise, Mr. X. argued that the 3d Circuit had jurisdiction to hear his appeal under 28 U.S. Code § 1291, which gives the federal Courts of Appeals “jurisdiction of appeals from all final decisions of the district courts of the United States”. In re Grand Jury, supra. The government seems to have challenged that, but both sides agreed that the issue of the Court of Appeals’ jurisdiction was “governed by the Supreme Court’s decision in Di Bella v. U.S., 369 U.S. 121 (1962). In re Grand Jury, supra.

“Under Di Bella, denial of a pre-indictment Rule 41(g) motion is not final and appealable if the motion was in effect for the suppression of evidence.” In re Grand Jury, supra. The Di Bella Court explained that to be “truly independent of criminal proceedings” and therefore final and appealable, a motion must be (i) solely for return of property and (ii) “in no way tied to a criminal prosecution”. Di Bella v. U.S., supra. The 3d Circuit noted that, in an earlier case, it had found that a motion for return of property was not “truly independent of criminal proceedings” given that the party filing the motion “was the subject of an ongoing grand jury investigation” which could result in an indictment, i.e., in criminal proceedings. In re Grand Jury, supra.

The 3d Circuit applied these standards to Mr. X’s appeal, and found that the order denying his Rule 41(g) motion was not a final and appealable order:

We arrive at this conclusion for two independent reasons. First, the motion plainly sought not just the equitable return of property, but also the suppression of evidence- i.e., to prevent the government from using the evidence in criminal proceedings. This is evidenced by the motion's requests for any copies of the seized documents and for an order directing the government to cease inspecting the evidence pending a ruling. . . .

Second, the property was seized in connection with an ongoing grand jury investigation of which the appellant is a target. Given the clear connection between the motion and a criminal prosecution (albeit an incipient one), the appellant `do[es] not satisfy the [second] requirement of Di Bella that the motion [be] in no way tied to a criminal prosecution in esse against [him].’ [U.S. v. Furina, 707 F.2d 82 (3d Cir. 1983)]. . . We conclude, then, that the order denying the appellant's Rule 41(g) motion is not final and appealable.

Finally, the 3d Circuit noted that in addition to seeking the “return and suppression of evidence”, Mr. X’s motion also requested that the warrant affidavit be unsealed:

Posted by Susan Brenner at 1:30 PM