"Record Pirating" and the Copyright Act 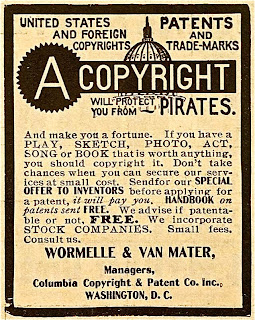 As Wikipedia explains (and as everyone probably knows), U.S. copyright law “governs the legally enforceable rights of creative and artistic works under the laws of the United States.”

As Wikipedia notes, the “power to enact copyright law is granted in Article I, Section 8, Clause 8” of the U.S. Constitution, which provides as follows: “The Congress shall have Power . . . To promote the Progress of Science and useful Arts, by security for limited Times to Authors and Inventors the exclusive Right to their respective Writings and Discoveries. . . “

This post is about a case in which federal copyright law collided with an Ohio statute that criminalized “record pirating.” The case is State v. Boyd, 2010 WL 3565414 (Ohio Court of Appeals 2010), and it arose when Walter Boyd was charged with

record pirating under [Ohio Revised Code § 1333.52] after a police officer discovered him selling bootleg pornographic DVDs on a street corner. He admitted to police that he had downloaded movies from the Internet and had `burned’ them onto blank DVDs.

The Court of Appeals began its analysis of Boyd’s argument by trying to figure out exactly what he had been charged with and convicted of:

The record is unclear which subsection of the statute Boyd was convicted of violating. [Ohio Revised Code § 1333.52(A)] provides that `[n]o person shall purposely do either of the following: (1) Transcribe, without the consent of the owner, any sounds recorded on a phonograph record, disc, wire, tape, film, or other article on which sounds are recorded, with intent to sell or use for profit through public performance any product derived from the transcription. Each transcription of sound in violation of division (A)(1) of this section is a separate offense. (2) Advertise, offer for sale, any product knowing it to have been produced in violation of division (A)(1) of this section.’

State v. Boyd, supra. The Court of Appeals noted that the

Ohio General Assembly enacted this statute in 1976, approximately a year and one-half before the federal Copyright Act [17 U.S. Code §§ 101 et seq.] took effect. We find no case law at all interpreting Ohio's record-pirating statute and no indication that it has ever been used in any prosecution.

preempts state-law actions. The act states that `[o]n and after January 1978, all legal or equitable rights that are equivalent to any of the exclusive rights within the general scope of the copyright as specified by section 106 in works of authorship that are fixed in a tangible medium of expression and come within the subject matter of copyright . . . , whether created before or after that date and where published or unpublished, are governed exclusively by this title. Thereafter, no person is entitled to any such right or equivalent right in any such work under the common law or statutes of any state.’

The Court of Appeals then turned to the specific issue before it: whether the record-pirating statute under which Boyd was charged and convicted was preempted by the federal Copyright Act. It explained that analyzing that issue involved a

two-part inquiry: `(1) whether a work is fixed in a tangible medium of expression within the subject matter of copyright and (2) whether the rights addressed are equivalent to the exclusive copyright rights set out in Section 106, Title 17, U.S. Code.’

Section 106, Title 17, U.S. Code, gives owners of copyrighted works exclusive rights to reproduce, prepare derivatives, perform, distribute, and display their work. This court has stated that the Copyright Act confers on the owner of the copyright `certain exclusive rights and provides the exclusive source for the protection of those rights. Simply stated, the rights protected are reproduction, adaptation, public performance, public distribution and public display.’

The Court of Appeals then took up the second issue, i.e., whether the rights involved were equivalent to the exclusive copyright rights set out in the Copyright Act. State v. Boyd, supra. It explained that a right is equivalent to one of the rights comprised by a copyright if it is “`infringed by the mere act of reproduction, performance, distribution, or display.’” State v. Boyd, supra (quoting State v. Perry, supra). It explained that to

Perry entered a no contest plea to charges of the unauthorized use of property and theft based on his allegedly carrying out the “unauthorized uploading, downloading and posting of computer software on a computer bulletin board”. State v. Perry, supra. At the plea hearing, the prosecution said Perry was “`exchanging and moving’” software and “`not only distributing software but . . . using it to facilitate the distribution of other items’”. State v. Perry, supra (emphasis in the original). The prosecution seems to have used these statements in an attempt to show the charges against Perry did contain an extra element that transformed the state charges into claims that were qualitatively different from a copyright claim. State v. Boyd, supra; State v. Perry, supra.

[n]one of the uses or attendant circumstances argued by the state is sufficient to satisfy the ‘extra element’ requirement that would except the charge of unauthorized use in this case from the express preemption clause in the copyright statute. . . The facts . . . simply do not support a finding that [the defendant] engaged in any unauthorized use other than that which is preempted by federal copyright laws.

State v. Perry, supra. The Boyd Court of Appeals quoted this passage from the Perry opinion and then explained that its

review of the record-pirating statute does not reveal an element of a claim that is qualitatively different from a copyright-infringement claim. In fact, we believe the record-pirating statute presents an even stronger case for preemption than the unauthorized-use statute in Perry. The entire gist of the offense is using the recording without the owner's consent, and the record shows that Boyd engaged in conduct that was covered by the federal copyright laws. And the Copyright Act has a mechanism for criminal enforcement [i.e., Section 506, Title 17 U.S. Code].

State v. Boyd, supra. The Court of Appeals also distinguished the charges in this case from the charge at issue in State v. Moning, 2002 WL 31127751 (Ohio Court of Appeals 2002). In Moning, a police officer “was convicted of unauthorized use of property under [Ohio Revised Code § 2913.04(B)] after he had improperly used law-enforcement databases without a legitimate law-enforcement purpose.” Section 2913.04(B) made it a crime to access a computer or computer system without being authorized to do so. State v. Moning, supra. The issue of pre-emption was also raised in that case, but the Ohio Court of Appeals found that the element of gaining access to the computer and the

[law-enforcement] database in violation of the rules and restrictions, and thus beyond the consent of the owner . . . is sufficient to satisfy the `extra element’ test and except [the] unauthorized-use-of[-]property charge from the express preemption clause in the Copyright Act. . . .

State v. Moning, supra. In rejecting Moning’s pre-emption argument, the Court of Appeals had held that none of the exclusive rights protected by the Copyright Act were implicated in that case. State v. Moning, supra. It found that in “Boyd's prosecution under the record-pirating statute, the exclusive rights protected by the act were definitely implicated” and so reversed his conviction and ordered him released. State v. Boyd, supra.

And that, of course, means that if Boyd is to be prosecuted for making and selling the bootleg DVDs, it has to be by the federal government.

Posted by Susan Brenner at 3:27 PM