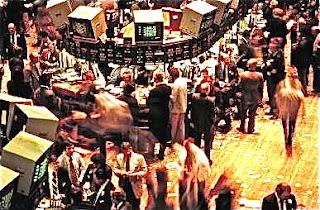 Aleynikov succeeded in getting the third count dismissed, but was unable to persuade the court to dismiss the first two counts. U.S. v. Aleynikov, supra. In this post, I’m going to focus on Aleynikov’s arguments as to the first two counts, the government’s response and the court’s ruling on those issues. I’m not going to address the § 1030 count for two reasons: One is to keep this post relatively short; the other is that I’ve written more about § 1030 crimes than about the crimes at issue in the first two counts. If you’d like to read more about this case, check out the Wikipedia entry on Sergey Aleynikov.

According to this opinion, this is how the case against Aleynikov arose:

Goldman Sachs & Co. is a global financial services firm engaged in high-frequency trading on securities and commodities markets. . . . Aleynikov was a computer programmer employed by Goldman as a Vice President in its Equities Division from May 2007 until June 2009. . . . . [He] was responsible for developing and maintaining some of the computer programs used to operate Goldman's high-frequency trading system. Aleynikov resigned . . . to work for Teza Technologies, LLC. . . . [as] `Executive Vice President, Platform Engineering,’. . . responsible for developing Teza's own high-frequency trading business that would compete with Goldman.

High-frequency trading . . . involves the rapid execution of high volumes of trades in which trading decisions are made by sophisticated computer programs that use complex mathematical formulae known as algorithms. The algorithms use statistical analyses of past trades and current market developments. Goldman used a proprietary system . . . [called] the `Platform,’ to rapidly obtain information on the latest market movements, process that information into a form that can be analyzed by the algorithms, and execute the trading decisions reached by the application of the algorithms to that information. Together, the trading algorithms and Platform comprise Goldman's trading system (the `Trading System’).

Goldman acquired portions of the Platform when it purchased the Hull Trading Company in 1999. . . . . Goldman's computer programmers have developed and modified the computer programs Goldman uses in its Trading System by writing and altering their source code. Goldman has not licensed its Trading System or made it or its components available to the public, and has taken measures to protect [its] source code. . . .

Aleynikov was a member of a team of programmers responsible for developing and improving aspects of the Platform. . . . On his last day of employment at Goldman, Aleynikov copied, compressed, encrypted, and transferred to an outside server in Germany hundreds of thousands of lines of source code for the Trading System. . . . After transferring the source code to the German server, Aleynikov deleted the program he used to encrypt the files. He also deleted his `bash history,’ i.e., the history of his most recent computer commands. . . . [I]n the days that followed, Aleynikov accessed the German server and downloaded the source code to his home computer, and from there to other home computers and to a portable flash drive. . . .

Aleynikov [then] flew to Chicago . . .to meet with Teza. He brought a laptop and the flash drive containing source code for Goldman's Trading System. . . .

Based on all this, Count I of the indictment charged Aleynikov with violating 18 U.S. Code § 1832(a)(2), which makes it a crime for one acting with the “intent to convert a trade secret, that is related to or included in a product that is produced for or placed in interstate or foreign commerce, to the economic benefit of anyone other than the owner thereof” to copy, duplicate, deliver, transmit or otherwise convey such information without being authorized to do so. Aleynikov moved to dismiss this count because he argued that it did not allege that the source code for Goldman’s Trading System is

related to or included in a `product’ that is `produced for or placed in interstate and foreign commerce.’ According to Aleynikov, a `product,' as used in [§ 1832(a)] must be a tangible item of personal property distributed to and used by the commercial public. Because Goldman has never licensed or sold the Trading System, and has no intention of doing so, Aleynikov contends that the Trading System is not a `product produced for or placed in' commerce within the meaning of § 1832. [He] does not dispute that the trade secret he allegedly stole is `related to or included in’ the Trading System.

U.S. v. Aleynikov, supra. The government argued that the Trading system is, in fact,

a `product’ . . . that has an `obvious and indisputable connection’ to interstate and foreign commerce. The Government thus agrees with Aleynikov that the trade secret at issue in Count One is the source code, and the relevant `product’ is the Trading System. . . . [T]he Government . . . expects to prove at trial that there are high-frequency trading systems that may be purchased by securities trading firms, and that Goldman maintains computers in the United States and elsewhere in the world that use its Trading System to conduct trading on world markets.

Count II charged him with transporting stolen property in violation of 18 U.S. Code § 2314, which makes it a crime to transport, transmit or transfer in interstate or foreign commerce “any goods, wares, merchandise, securities or money, of the value of $5,00 or more” knowing that they have been “stolen, converted or taken by fraud”. Aleynikov argued that the source code he was charged with transporting and transmitting was not “goods, wares, merchandise, securities or money.” U.S. v. Aleynikov, supra. He also argued that § 2314 “only to tangible items, and not to the theft of intangibles, such as the trade secrets embodied in the Trading System's source code.” U.S. v. Aleynikov, supra.

In ruling on Aleynikov’s motion to dismiss this count, the judge noted that while § 2314 does not define “goods, wares [or] merchandise,” the U.S. Court of Appeals for the 2d Circuit has held that these terms are to be interpreted “broadly,” to encompass “`a general and comprehensive designation of such personal property or chattels as are ordinarily a subject of commerce.’” In re Vericker, 446 F.2d 244 (1971) (quoting U.S. v. Seagraves, 265 F.2d 876 (U.S. Court of Appeals for the 3d Circuit 1959)). The judge also noted that courts in the Southern District of New York have held that § 2314 applies to “confidential business information for which a market . . . exists.” U.S. v. Aleynikov, supra. Based on these and other considerations, the judge held that the source code

constitutes `goods' for purposes of § 2314. The source code . . . contains highly confidential trade secrets related to the Trading System. . . . Goldman paid approximately $500 million for components of the Platform when it purchased Hull. In addition, the Government has proffered that the source code would be valuable for any firm seeking to launch, or enhance, a high-frequency trading business. Accordingly, the source code may be viewed as `ordinarily a subject of commerce.’

U.S. v. Aleynikov, supra. The judge also rejected Aleynikov’s argument that § 2314 only applies to “tangible” goods. She found, first, that § 2314 does not distinguish between tangible and intangible goods; she also found that it would be absurd to hold that § 2314 applies to someone who transports hard copy of source code in interstate commerce but not to someone who transports the code in digital form. U.S. v. Aleynikov, supra. She also pointed out that, in an aside, the Supreme Court noted in Dowling v. U.S., 473 U.S. 207 (1985), that for the purposes of applying § 2314 it did not “`matter that the [stolen] item owes a major portion of its value to an intangible component.’” U.S. v. Aleynikov, supra (quoting U.S. v. Dowling with added emphasis).

For these and other reasons, she denied Aleynikov’s motion to dismiss Count II. U.S. v. Aleynikov, supra. So, absent some unexpected development, it looks like the case is going to trial.

Posted by Susan Brenner at 1:02 PM